To assess the long-term prospects for Netflix (NFLX.US), this review examines the two most important aspects for sustainable growth: return on capital employed (“ROCE”) and flexibility of capital allocation.

The results show that the NFLX achieves a consistently high ROCE and has strong cash generation, a potent combination to drive organic growth. But on the flip side, the results also show that at its current price levels, NFLX has reached its full valuation that current fundamentals can support. What does this mean, that its market value is in line with its book value. Given that potential returns over the medium term are limited, investing at this point will require some time, patience and commitment for the fundamentals to return to offering potential for appreciation in the share price.

For simplicity and to understand in a simple way what Netflix is, it is the largest digital television network in the world and has approximately 207 million paid subscriptions in more than 190 countries. NFLX income breaks down to 50% for US / Canada and 50% for the rest of the world.

The keys to NFLX are in its scale and scalability. The table below shows the number of subscribers since 2013 worldwide. As you can see, Netflix had 207.64 million subscribers worldwide as of the first quarter of 2021. The subscriber base has been growing by 26% CAGR (compound annual growth) between 2013 and 2018. In the last 3 4 years later, competition in the streaming space has intensified. And NFLX subscription growth has slowed a bit, but it's still growing at an impressive rate. The subscriber base has been growing at a CAGR of 18% between 2018 and the first quarter of 2021. 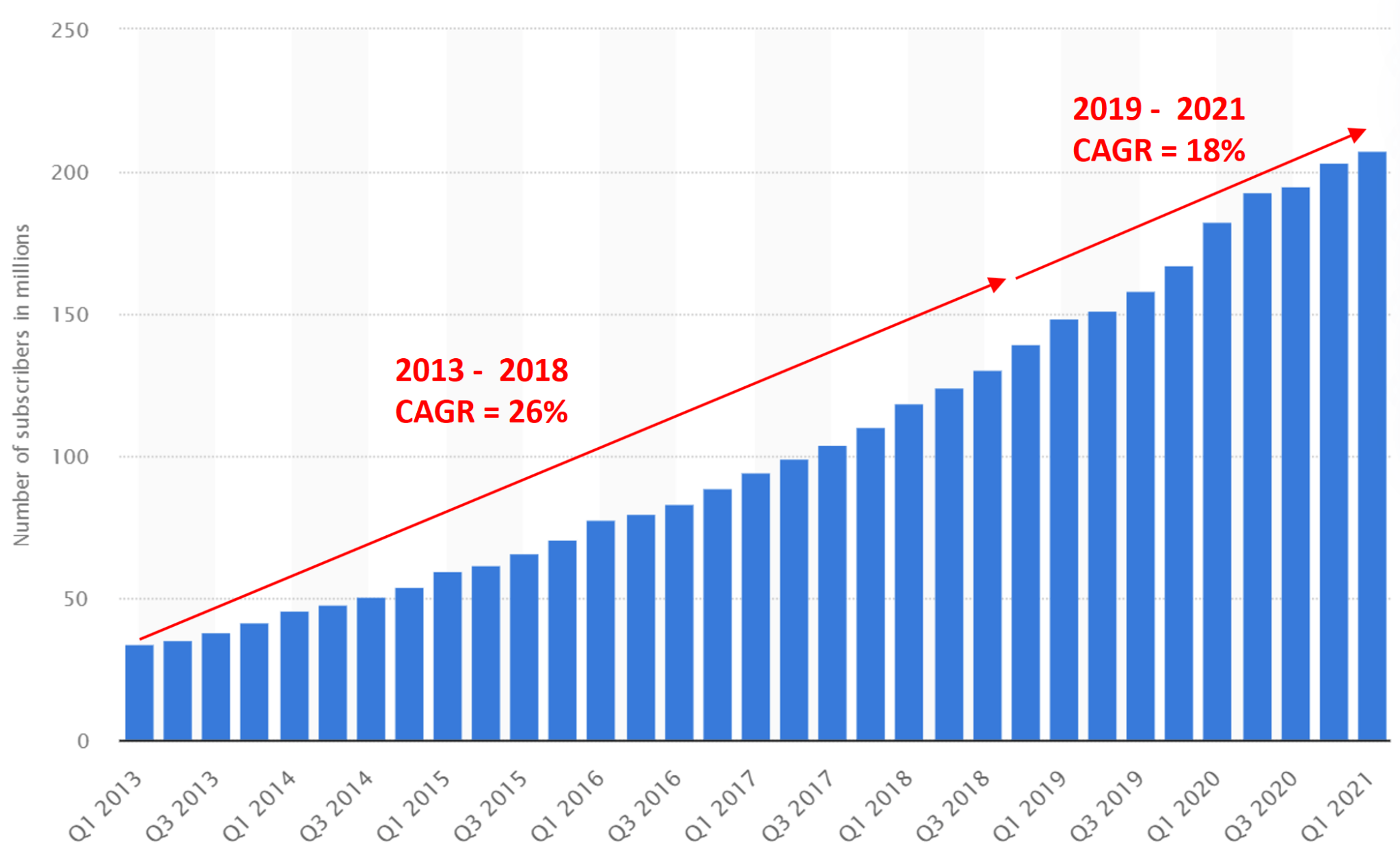 NFLX's positioning as an industry leader is unlikely to change in the future (barring any major regulatory or antitrust changes) due to so-called "network effects." Network effects refer to the fact that the value of certain products or services increases as more people use them. In other words, certain networks become more and more valuable as they get bigger.

There is nothing new in the concept. It has been true in other sectors such as railways, telephones and fax machines. All of these examples share these common traits: A) the larger the network gets, the more valuable it becomes (a segment of a railroad that links cities A and B is much more valuable when this segment is also linked with other railways that link other cities); and B) the larger the network, the higher the cost of switching (if everyone uses a fax machine and you don't want to use one, you'll have a hard time finding a viable alternative).

Again, the concept is nothing new. But the age of the Internet dramatically amplified the power of network effects. Once an advantage is established, for whatever reason, intelligent artificial intelligence algorithms, advanced machine learning algorithms, or just plain bad luck (NFLX has benefited from all of these factors), the network effects will simply kick in, take over. control and they will get worse.

In the case of NFLX, it benefit from self-sustaining positive feedback: that is, more users on this network will lead to more relevant and accurate recommended content and better decisions to create new content, which will make the network even better and more valuable. for its users. and customers, which, in turn, will attract more new users and customers to join and make it harder for existing users to exit, again leading to more users and an even larger network and so on.

Flexibility and profitability in capital allocation

The business is so profitable and in such a strong financial position that it enjoys enviable freedom of capital allocation, as illustrated in the chart below. 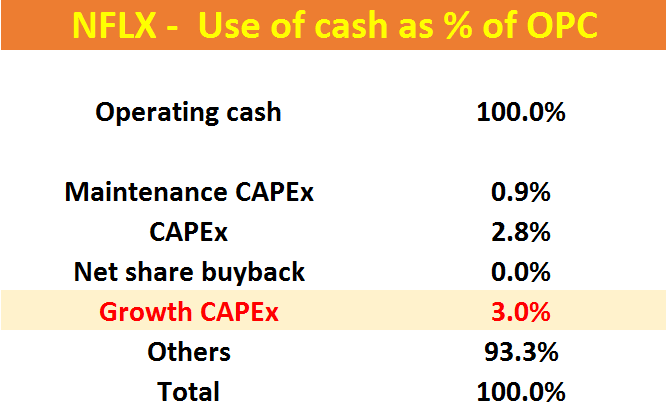 This table shows that NFLX has been allocating its Operating Cash (“OPC”) for the past several years. As can be seen, the maintenance CAPEx is negligible, only 0.9%. And CAPEx spending only requires 2.8% of the OPC. Currently, NFLX also does not conduct share buybacks and has a very light cost of debt. Long-term debt at this point is about $ 15 billion and it interest payment is about 750 million per year. To put things in perspective, it has generated a little over $ 15 billion in OPCs annually in recent years. As a result, NFLX is somehow effectively debt free - debt service is a negligible fraction of your debt. Most importantly, NFLX could pay off all the debts in one year if it want to.

So the big picture of capital allocation is really simple for NFLX - it generates a ton of cash organically and has almost absolute freedom to allocate available cash. It can reinvest the capital to drive further growth, hold it in the bank account, pay a dividend, pay off debt, buy back shares, and more. Plus, when combined with its high return on equity, it provides a powerful combination to drive long-term organic growth.

The root causes of the impressive cash-generating capacity above are technological advancement and scalability of the service. NFLX enjoys superior profitability both relative to other competitors in the same industry and to the market as a whole, as illustrated in the chart below. For this reason, It can afford to produce content with first-rate players without even involving an additional financial effort, knowing that your market is global and you can offer it to any subscriber from anywhere in the world.

And in the long term, the growth rate is given by:

The reasons for the long-term simplicity are mainly twofold. The first reason is that all fluctuations in the valuation are averaged (all luck at the end is equal). Second, it doesn't really matter how the company uses the profits (such as dividends, held in the bank account, or used to buy back shares). As long as it is used sensibly (as in the case of NFLX), it will be reflected as a return to the shareholder of the company. That is why valuation metrics such as P / E (PER) do not appear at all in this analysis.

So, as a shareholder in a long-term business, the puzzle of our return consists of three pieces: OEY, ROCE, and the reinvestment rate. And we'll go through them one by one for NFLX immediately below.

OEY are the shareholder's profit divided by the purchase price. All the complications are in estimating the shareholder's benefits: the real economic benefits of the company, not the nominal book profits. Here, free cash flow ("FCF") can be used as shareholder profit. It is conservative in the sense that, strictly speaking, shareholder earnings should be free cash flow plus the portion of CAPEx that is used to drive growth (ie, the growth CAPEx).

ROCE represents the return on capital employed. Note that ROCE is different from return on equity (important difference). ROCE considers the return on REALLY employed capital and therefore provides information on how much additional capital a company needs to invest to earn a certain additional amount of revenue, a key to estimating PGR (Perpetual Growth Rate). The reinvestment rate is the portion of revenue that the company recovers to drive further growth.

With an ROCE of 59%, and with only 3% of your profits reinvested in the business, NFLX can still grow at the rate of 2% per year, organically and in perpetuity! In a famous comment from reputed investor Warren Buffett, he pointed out that there are companies that, at the end of the day, indicate that they have a lot of depreciated assets and equipment and tell investors that "these are our benefits." By this phrase, NFLX is the exact opposite of the businesses he hates - he makes a lot of cash but doesn't need to spend a lot to grow.

Let's not forget that NFLX can reinvest well over 3%, as discussed above. But today, NFLX will most likely maintain that 3% level because, at this stage, the company cannot find so many opportunities to reinvest that could multiply the scalability of the business. But there is no bad time to have a lot of cash and the option to act and have the "trigger ready" for when opportunities arise is synonymous with strength and intelligence.

NFLX is playing the clear example of a proper valuation, where the share price matches the Book Value. So much so, that the lateral range developed by the company has lasted for 14 months.

Although it has recently developed an attempt to break up to the upside, the strength of the lateral range could be maintained, until it finds support in the bullish guideline drawn by both the price in the short term (red lines), as well as by the RSI indicator.

The longer the lateral range lasts, according to the theory, the stronger the breakout of the box will be and it does not appear that the recent attempt by the bulls is going to culminate positively, although a new all-time high has been drawn at $ 615.32.

This review highlights two of the most important fundamentals about NFLX and its sustainability of growth: return on capital employed (“ROCE”) and reinvestment rate. The results show that NFLX achieves a consistently high ROCE and has enviable capital allocation flexibility - a potent combination to drive organic growth. However, at the current entry valuation, the long-term total return is limited to a projection of around 7.3%. It is true that it is not an exceptional return. But when adjusted for its financial strength and the optionality it enjoys, NFLX is still a decent investment for patient investors who can wait for fundamentals to catch up.