Chinese exports unexpectedly fell much less than anticipated in October driven by rising optimism regarding an interim trade agreement between Washington and Beijing. In dollar terms exports declined 0.9% compared to the same period last year, while the Bloomberg median estimate had suggested a 3.9% fall. This better than expected reading seems to offer some relief to Chinese companies struggling with falling profits amid factory deflation. At the same time, imports plunged as much as 6.4% in annual terms, producing a lower than expected decline but still remaining deep in the negative territory. Moreover, underperformance in imports has been seen in various destinations for months, as evidenced by the chart below. It implies that domestic demand is rather poor and it may struggle to make a noticeable improvement without a more permanent trade agreement between the US and China leading to some tariff rollbacks.

Overall, a trade surplus in October amounted to $42.8 billion, up from downwardly revised $39.2 billion. Nevertheless, what could be more important is the fact that since July a Chinese trade overhang has shrunk, when measured by a 12-month rolling window, reaching its lowest level since October 2018. Looking forward, there is a chance to see a more notable improvement in trade activity across the globe once both China and the US stick to their latest non-binding commitments and act toward rolling tariffs back. 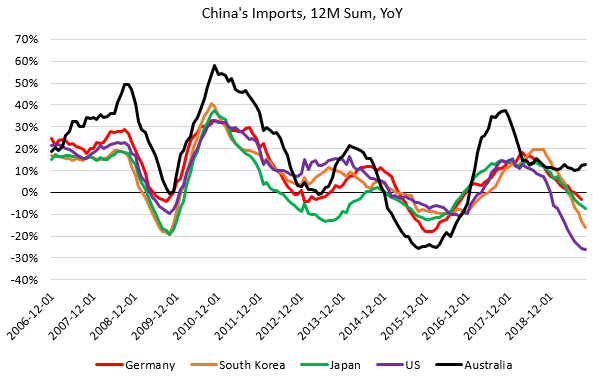 The Institute for Supply Management's (ISM) Manufacturing PMI in May rose to 43.1  from 41.5 in the previous month. Today’s reading came...

EURUSD launched today’s session higher. However the upward move was halted at the key resistance zone (1.1150). Looking at H4 interval, the potential...