Gold price has been on the rise for a long time. Gold gained over the past year in spite of upbeat moods on the global financial markets. Investors are aware that central banks are getting more and more involved in stimulating the economy and they try to diversify their portfolios with precious metals. Precious metal has become even more active as tensions in the Middle East began to rise. What does it mean for gold?

Killing of Qasem Soleimani in Iraq by US forces increased tensions in the region and created risk of a bigger military conflict. Moreover, the assassination crushed hopes for signing of a new nuclear deal and made Iran withdraw from its current uranium enrichment commitments. Iran also vowed to retaliate against the US for killing of one of its top military officials. We did not have to wait long for this response as it came less than a week after Soleimani killing. Iran launched a missile attack on the US targets in Iraq and claimed to have killed 80 US soldiers. However, US have not confirmed news on the number of casualties. Nevertheless, gold benefits on the situation and has risen over 5% since the beginning of the conflict. Precious metal even broke above the $1600 handle for a brief moment. What’s next? 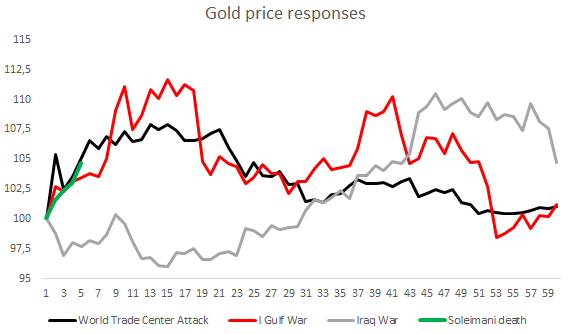 Let’s take a look at how gold price performed during previous military conflicts in the Middle East. Current price performance looks similar to two other periods: aftermath of the WTC attacks (black line) and the First Gulf War (red line). What one may find interesting is that gold price performance was completely opposite during the Second Gulf War. This can be explained by the fact that a start to the conflict was expected back then. Nevertheless, gold price began to rise later on. It should be noted that price gain in 3 of the mentioned conflicts ranged from 7% to 12%. However, one should keep in mind that market’s reaction to uncertainty weakens over time and fundamental factors start to play a major role.

Gold price has been on the rise for some time already. ETF holdings of gold grew significantly in the past two years, what reflects rising interest of gold investments. Concerns over global slowdown combined with concerns over the impact of prolonged period of quantitative easing made central banks buyers of gold once again. Polish, Chinese, Russian, Turkish and Indian central banks made biggest purchases of gold in the previous year. Prevailing economic uncertainty, rising inflation as well as declining interest rates could support investment demand for gold going forward. Central banks purchases and investment demand accounted for over 50% of the global demand for gold in the Q3 2019. 4-quarter moving average for those two factors has been rising for some time. Moreover, should the US dollar start to decline, Asian jewellery demand could pick-up as well. 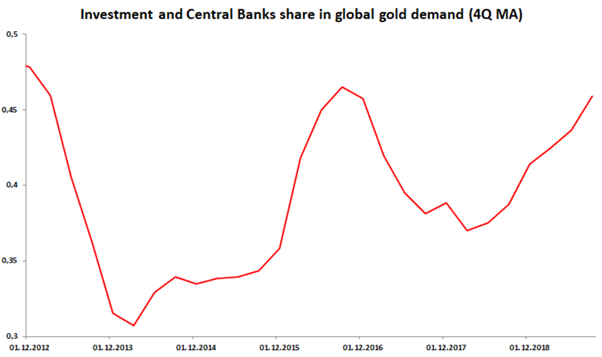 4-quarter moving average for the share of investments and central bank purchases in the global gold demand. Strong rebound can spotted over the past two years. Taking a look at current macroeconomic and geopolitical trends, importance of those two factors may continue to increase. Source: Bloomberg, XTB Research 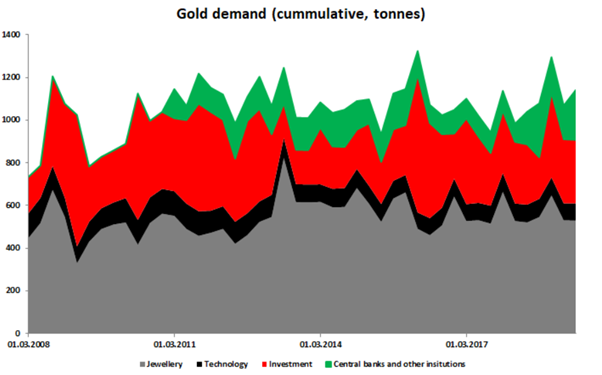 Share of investment demand and central bank purchases in the global gold demand has been on the rise in recent quarters. Simultaneously, jewellery demand remains muted due to strong US dollar. Weakening of the US currency could change the situation. Moreover, it should also support investment demand and central bank purchases. It should be noted that at the turn of the previous decade share of investments was even greater than today. Source: Bloomberg, XTB Research

Potential correction looks support from a technical point of view. Market realize the range of a break out of the triangle pattern and we can observe a supply-side reaction to the 61.8% Fibo level of the 2011-2015 downward move. Easing of tensions in the Middle East could be a trigger for a correction. Strong support can be found near the upward trendline slightly above $1400 handle. On the other hand, should gold continue to rally, bulls could aim for the $1700-1740 area. Source: xStation5

Crude inventories in the US dropped  by 7.99 million barrels in the week ended April 30th, following an 0.09 million increase in the previous week...