Today's session is special for the main cryptocurrency. It is today that the Republic of El Salvador (a small country in Central America with a population of around 6.8 million) has officially accepted Bitcoin as legal tender. This plan has been known for a long time, but from today citizens can already use cryptocurrency in their daily payments.

The President of El Salvador has repeatedly pointed to the advantages of such a move, including easier access to financial services for those who do not have a bank account or huge savings on money transfers. Thus, traders from the cryptocurrency market were waiting impatiently for today's session. Unexpectedly, Bitcoin has dived hard today, as we mentioned in our earlier post. However, it is worth pointing out that the president of El Salvador - Nayib Bukele - actively informs the market about the purchases of the main cryptocurrency. On Twitter, he announced that El Salvador already has 550 Bitcoins of which 150 coins were purchased during the afternoon sell-off. 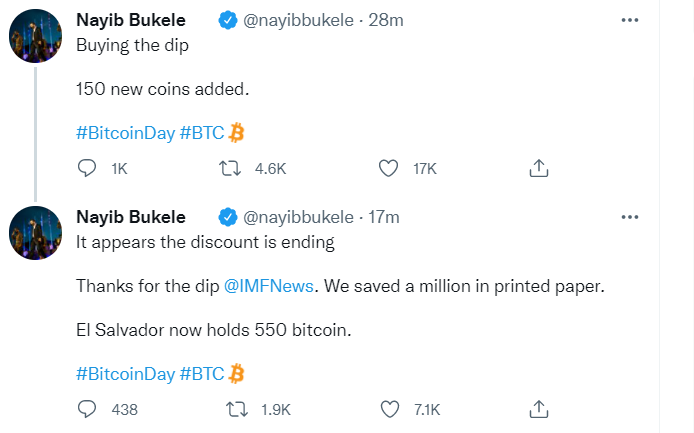 The President of El Salvador reports that the country took advantage of the sharp sell-off and bought 150 Bitcoins. In total, the country already has 550 coins. Source: Twitter

Pessimistic news also hit the market. China allegedly banned Bitcoin mining in Sichuan Province while at the same time prohibiting banks from participating in cryptocurrency transactions. As you can see, the world remains clearly divided when it comes to cryptocurrencies - while some countries implement further restrictions on digital assets, El Salvador believes that accepting Bitcoin as a means of payment will benefit its citizens.