Stocks
3 minute(s)
With the largest economy in the world, the US stock market is massively influential. So, we thought it would be interesting to uncover which stocks from the S&P 500 are the most liked and disliked, according to social listening data from over the past five years.

With the largest economy in the world, the US stock market is massively influential. So, we thought it would be interesting to uncover which stocks from the S&P 500 are the most liked and disliked, according to social listening data from over the past five years.

Using social listening data from Linkfluence, we’ve been able to find out the 20 most liked and 20 most disliked stocks in the US over the last five years. And you might be surprised by the results!

The 20 most liked stocks 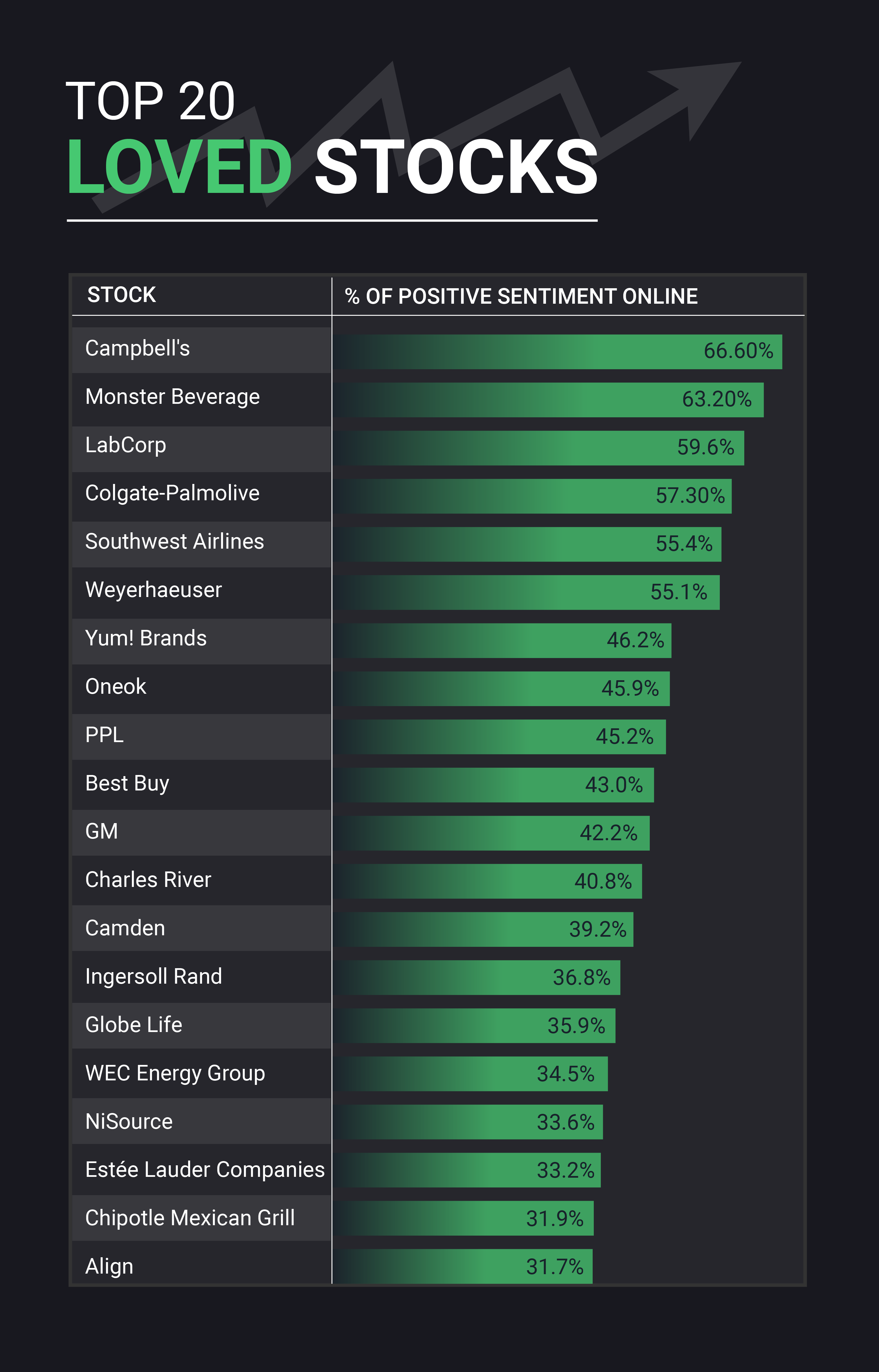 Coming out as the most loved stock in the US, with 66.6% of all online conversations considered positive, is Campbell’s - the famous soup company. Taking the second position is Monster Beverage, with 63.2% positive sentiment. Interestingly, Monster is actually the second-best-selling energy drink brand in the United States, just behind Red Bull.

In third is the clinical laboratory company, LabCorp, with 59.6% of online conversation considered positive, followed closely by one of the world’s leading global consumer products companies, Colgate-Palmolive, with 57.3%. Rounding out the top five, we have the major US airline Southwest Airlines, with 55.4% positive sentiment.

An interesting point to note about the 20 most popular stocks is that the most positively talked about tend to have a very high positive vs negative sentiment. For example, ranking first, Campbell’s has an astounding 66.6% positive sentiment, compared to only 1.08% of online conversations being negative.

The 20 most disliked stocks 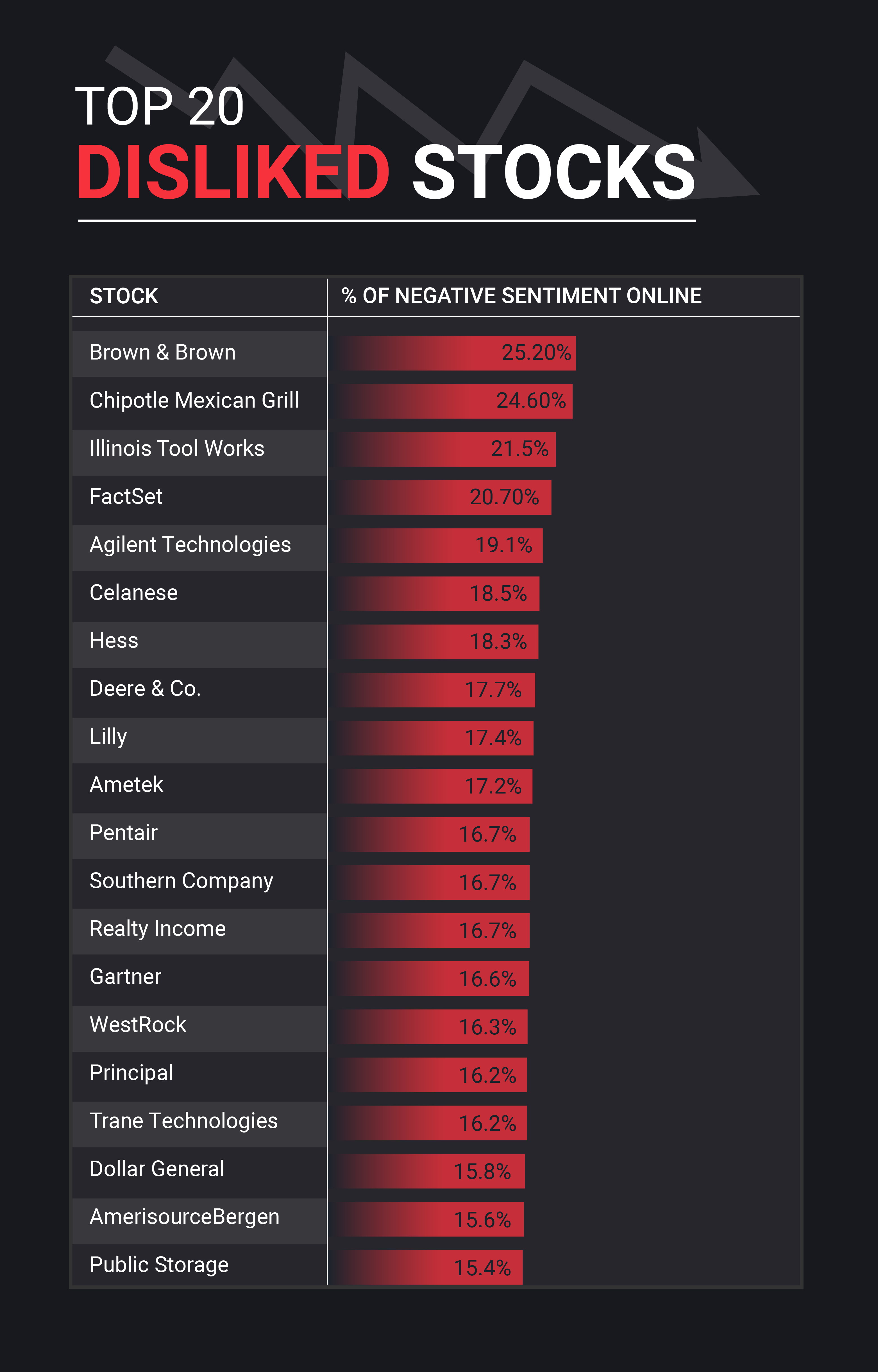 Moving over to the 20 most disliked stocks in the US, it’s insurance company Brown & Brown that takes top spot with 25.2% of online conversations negative in nature.

Next up is Chipotle Mexican Grill, with 24.6% negative sentiment. What’s particularly unusual about this stock is that, while it ranks as the second most disliked, it also appears among the 20 most liked, in 19th, due to having 31.9% positive sentiment data. Clearly, traders and investors have quite contrasting opinions on this restaurant chain.

Curiously, comparing both lists, it’s worth highlighting that many of the most disliked stocks fall into the technology, software, and manufacturing industries, whereas a lot of the most liked stocks are FMCG brands. Perhaps this is some sort of a pattern?

You may have also noticed that there are some massive household names and large-cap stocks which don’t feature in either of our lists. This includes the likes of Netflix, Amazon, PayPal, McDonald’s, Disney, Coca-Cola, Hilton, and eBay.

What do you think, did you correctly guess any of the most liked and disliked stocks? Of course, sentiment data isn’t enough to drastically predict how stocks perform on the market; however, it is certainly interesting to see which stocks feature in each list.

Perhaps you’re new to the world of stocks and trading and want to see if you’ve got what it takes to be a successful trader? You can sign up for a free Forex & CFD demo account, where you put your skills to the test, risk-free. We also have an entire learn to trade section for traders who are looking to build and expand on their knowledge.

The top 20 stocks for each of these categories were then extracted and presented in two lists, revealing the 20 most liked and the 20 most disliked stocks in the US over the last five years.

2 minutes
3 Strategies for Trading on the USFANG

6 minutes
Exploring the UK and US Trading Scenes: How Do They Differ?