The Most Searched Stocks Around the World

3 minute(s)
A lot has been going on in the stock market as of late, including Elon Musk’s proposed takeover of Twitter for $44 billion making headlines everywhere. But while such big news is bound to be of interest globally, do searches of particular stocks differ greatly by country, and if so, which ones?

A lot has been going on in the stock market as of late, including Elon Musk’s proposed takeover of Twitter for $44 billion making headlines everywhere. But while such big news is bound to be of interest globally, do searches of particular stocks differ greatly by country, and if so, which ones?

Analysing Google data of the top 50 largest companies based on market cap, the team at XTB have revealed the most searched stocks in 18 of the G20 countries around the world.

Most searched stocks in the UK

Beginning in the UK, the stock with the biggest average monthly Google search volume is Elon Musk’s very own Tesla with 49,000 searches. Of course, this is perhaps no surprise, given that Musk is such a public figure.

In second is the Chinese commerce company Alibaba, at 41,000 monthly searches, which is also rather unsurprising, given that it’s one of the world’s biggest companies. Meanwhile, in third with, 29,000 searches, is social media beast Meta, formerly known as Facebook, which actually saw its biggest ever stock market loss back in February of this year.

The shopping giant Amazon takes the fourth position by UK searches at 16,000, followed by another household name in Microsoft, which rounds out the top five with its 14,000 monthly searches. It’s also worth noting that the companies Alphabet, aka Google, and ASML appear in the UK’s top 10, but not in either of the US or Canada’s lists. Most searched stocks in the US

Across the ocean, in the United States, Tesla again ranks first with an average monthly search volume of 2.2m, followed by Apple with 1.4m searches - which may not be a shock given how big the brand is.

NVIDIA comes third at 874,000 searches, while Amazon places fourth (843,000) and Alibaba fifth (793,000). The list also includes other North American companies who didn’t make the top 10 in the UK, including Pfizer, Exxon Mobil, and Bank of America in positions eighth to tenth. 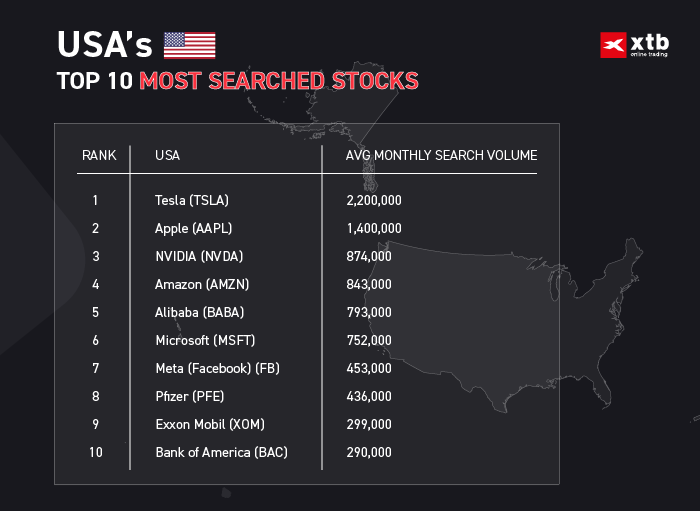 Most searched stocks in Canada

In Canada, the ten most commonly searched stocks list features many of the same names as the UK and US, although, unlike in America, Meta earns a spot in the top five ahead of NVIDIA.

Some Canadians might be taken aback to see Bank of America’s presence in tenth, given that, while there are some offices in the country, they don’t actually have any retail branches or locations in Canada. Most searched stocks in other G20 countries

Interestingly, regardless of location, it seems the most searched stocks around the world tend to be quite similar. For instance, both Tesla and Alibaba consistently make the top three - except for in India where Alibaba only just manages to crack the top ten.

Other companies that rank among the three most searched stocks include Meta in France, Spain, Brazil, Australia, Saudi Arabia, Mexico, Indonesia, and Turkey, while Apple appears to be a popular choice in Italy, Argentina, and South Africa. NVIDIA also makes a few appearances in Germany, Japan, South Korea, and India.

We hope we’ve been able to shed some light on just which stocks are of the most interest around the world. We also have a dedicated market news section where you can keep you with the very latest from across the globe.

And if you’re looking to learn more about trading and investing, you can find out more over on our trading academy, or open your very own XTB account.

3 minutes
What Are Non-Farm Payrolls (NFP)?

1 minutes
How to Use the NFP Report