The Race to 5 Trillion

5 minute(s)
Do you know how many companies are worth over a trillion in market cap? Find out who the biggest companies around the world are and just how fast they’re growing.

When you think about the biggest companies in the world, there are without a doubt a few that spring to mind. Apple, Microsoft, perhaps Tesla?

These three companies are certainly giants in the trading market, but it might come as a surprise to discover that they all only crossed the 1 trillion market cap in the last few years; Apple and Microsoft’s overall market value leapt by roughly 500 billion each in 2019, while Tesla saw even bigger growth, skyrocketing from 75 billion in 2019 to over 1.1 trillion in 2021.

But this begs the question: if these companies continue to grow at such substantial rates, who will be the first to cross the 5 or 10 trillion mark? And perhaps more interestingly, are there any other companies that could unseat them from their podium positions?

In order to see which companies will hit the 5 trillion mark first, we created a list of the top 100 largest corporations in the world in 2021 based on market capitalisation data compiled by Statista. We then gathered all the historical market data for each company from 2010 to 2021, from companiesmarketcap.com, and used their rate of growth to forecast whether each is likely to reach or exceed the 5 trillion mark by 2100. 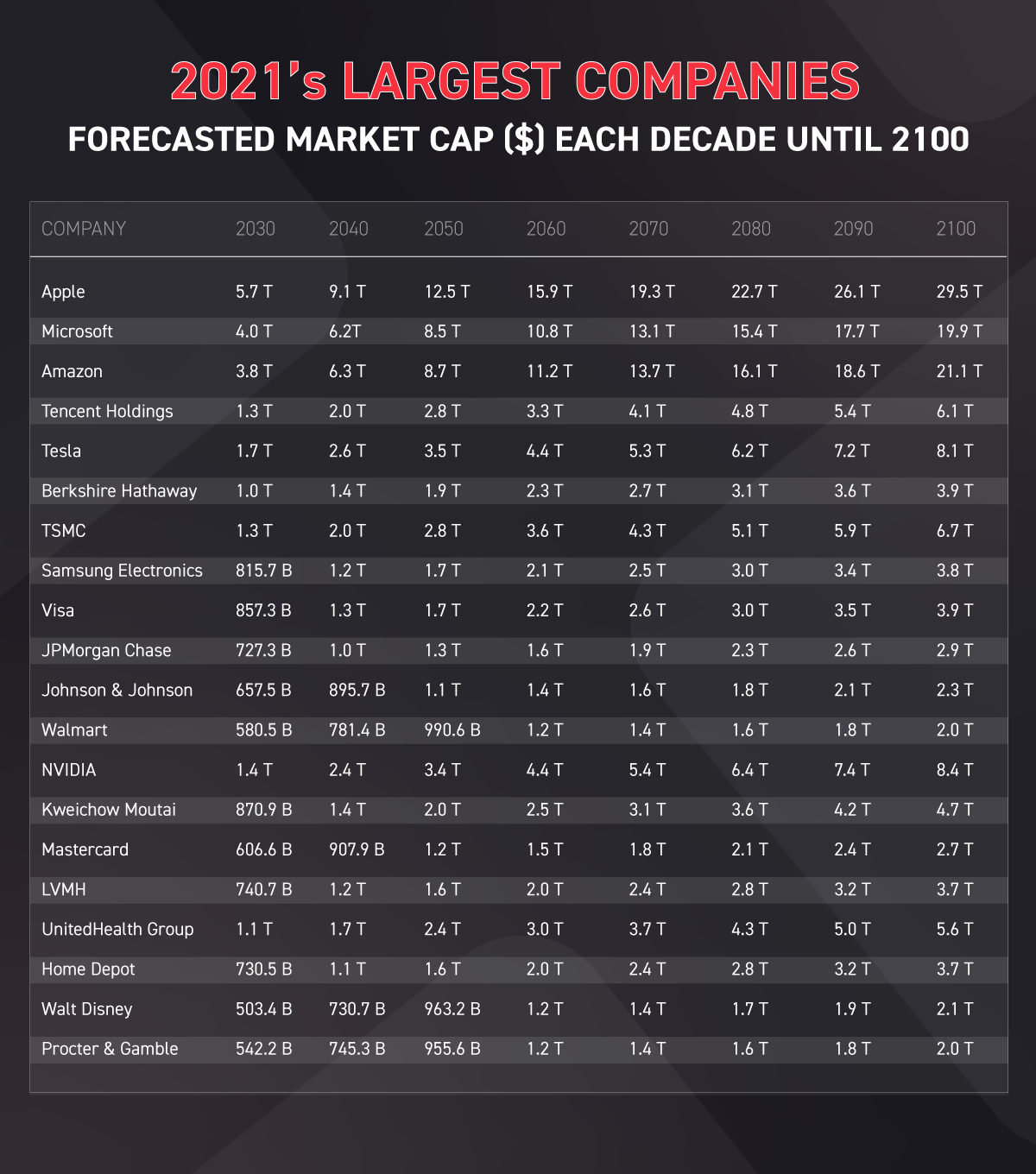 While this forecast is simply an estimate and doesn’t account for potential market fluctuations, if growth remains consistent, it’s clear that some of the biggest companies in the world might be reaching the 5 trillion mark a lot sooner than some of us might have expected!

Based on data provided by Statista, Apple and Microsoft were the two biggest companies in the world in 2021, holding a market cap of 2.9 and 2.5 trillion respectively.

It should come as no surprise then that we estimate these two companies are likely to be the first to reach the 5 trillion mark: and well before 2100. Assuming there are no substantial disruptions to the global market, Apple has the potential to reach 5 trillion as early as 2028!

Microsoft isn’t far behind, estimated to reach 5 trillion just seven years later in 2035. But there’s a chance they won’t be in second place for much longer.

The ever-expanding titan that is Amazon crossed the 1 trillion mark just a year later than Microsoft, and, more importantly, its continued rate of rapid growth shows it could match Microsoft at the five trillion milestone in 2035, and potentially exceed Microsoft’s market value in the following years.

Other companies likely to hit 5 trillion before 2100 include the likes of Tesla and NVIDIA, who have the capacity to reach it by 2066, as well as TSMC, Tencent Holdings, and UnitedHealth Group, who could see themselves valued at 5 trillion by 2078, 2083, and 2090.

But unless these companies see an unprecedented leap in growth (which certainly isn’t impossible in the ever-changing world of trading), their chances of beating the top three companies on our list are slim. 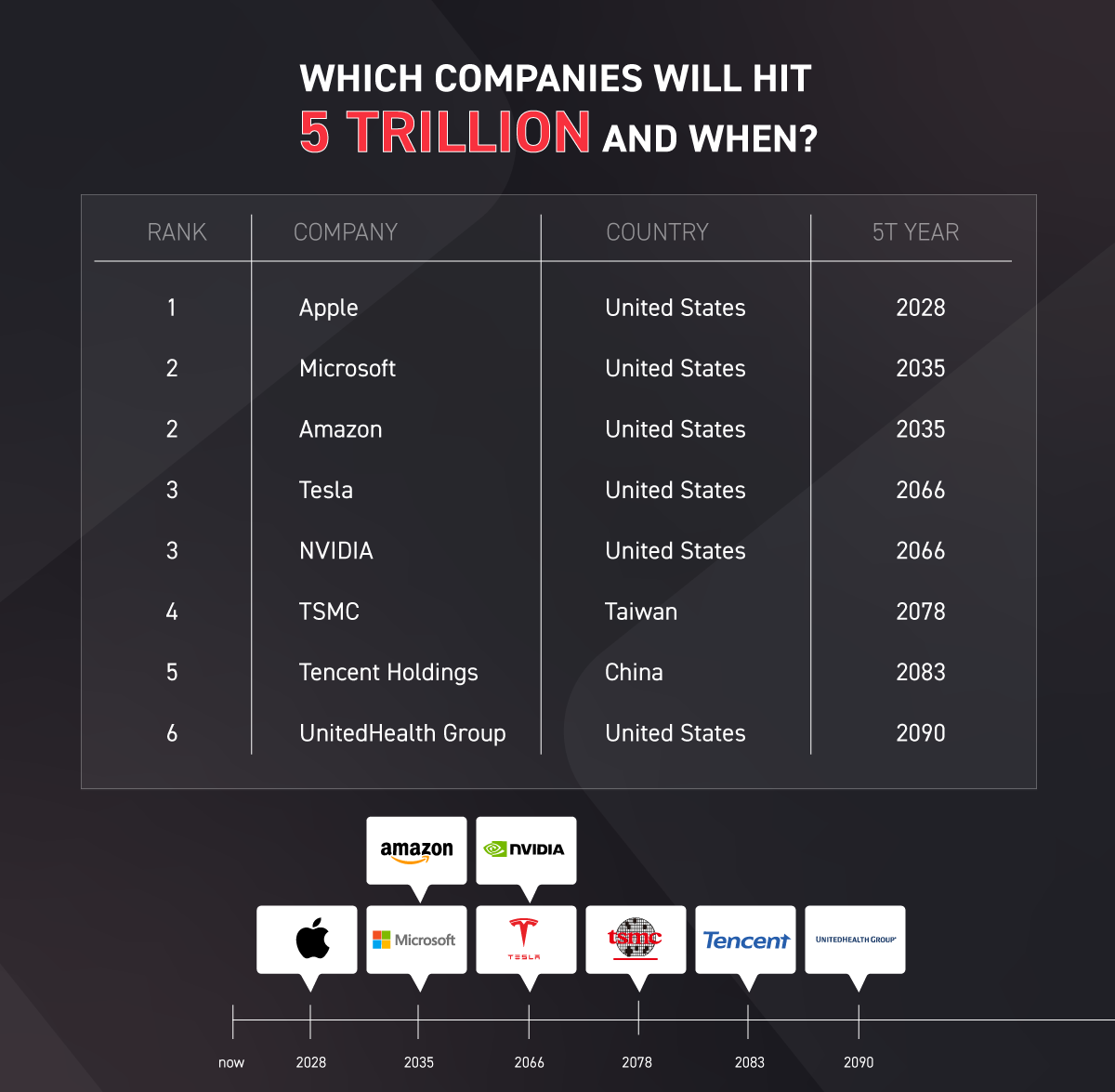 Top companies that could hit 10 trillion before 2100

So, do any of our top contenders have the potential to reach 10 trillion before 2100? The answer is a resounding yes!

Based on the data we collected, Apple is set to continue sprinting ahead of the competition, exceeding the 10 trillion mark by 2043. Not only is that earlier than any other company, but it’s also a full decade ahead of Microsoft and Amazon.

Microsoft is not set to reach 10 trillion until 2057, at which point it may very well have been knocked into third place by Amazon. The potential growth of both these companies market caps is neck-and-neck, but it’s very possible for Amazon to strike out ahead of Microsoft in the coming decades and reach 10 trillion by 2055.

As for our other competing companies, Tesla and NVIDIA are close, with NVIDIA set to actually overtake Tesla’s value by 2100. But it looks like it will take a few more years for any other corporations to cross the 10 trillion threshold.

Where do other popular companies stand in the race?

You might have noticed that numerous other popular companies sadly didn’t make it into the 5 trillion race. Take Netflix, Starbucks, and McDonald's, for example. All three of these companies are incredibly popular, but are set to fall well behind the 5 trillion mark even by 2100.

Netflix is the closest of the three, forecasted to reach 1 trillion in 2041 and 3.3 trillion by 2100. Streaming services are as popular as ever, but it’s possible Netflix’s growth has slowed due to the wealth of competition it now faces; particularly that posed by Amazon Prime.

Despite being around for over six decades, McDonald’s market cap has yet to reach 1 trillion. It has the potential to do so by 2074, but only if it maintains its slow but consistent growth.

As for Starbucks, they might be one of the most popular coffeehouse companies around, but based on the data we collected, they’ll need to see a substantial boost to their market value to even hit 1 trillion by 2100.

Other big companies of interest that could actually hit the 5 trillion mark but weren’t included on our list include the likes of Alphabet, who could reach 5 trillion by 2034, and Facebook (Meta), who are on track to hit it by 2064. Unfortunately, due to the lack of data on their market cap in the early 2010s, we couldn’t be sure of the accuracy of the data and, therefore, opted not to include them.

So, what does this all mean for the future world of stocks and trading? As we stated at the start, this forecast is just an estimation, and plenty could happen in the coming decades that could reshape the market world!

But if you want to keep up to date with the latest market news, the best place to do that is on the XTB website. We’re constantly tracking the state of the market so you can stay as informed as possible.

Of course, if you’re new to stocks and trading but want to learn more, you can visit XTB Trading Academy and take the first steps in your trading journey.

9 minutes
Best Companies to Invest In & Stocks to Buy – How to Choose?

10 minutes
REIT ETF & Stock - How to Invest in Property