3 stories to watch as equity indices surge to 2019 highs

The start of this year has been spectacular for stocks around the globe with US indices fully recovering from the December plunge and bourses everywhere from China to Germany seeing major advances. While investors reacted positively the U-turn in the Fed policy, there are more factors in play for stocks. We present them in this analysis.

It’s nearly certain that we will not have a trade deal until the end of February but the White House is ready to extend this period for as long as delegations are negotiating. Markets have been rising in US and China to a significant extent on the back of encouraging leaks but it is still uncertain what the deal will actually cover. The US wants China to prevent technology transfer, open its market for US companies and refrain from using exchange rate for competitive purposes. It is quite likely that a deal is signed but the US returns with tariffs in few months’ time if it is not happy with the execution.

President Donald Trump has just received a report from the Commerce Department on the automotive sector and could use it as a justification to impose tariffs on auto imports. There are rumours of tariffs as high as 25% which would obviously be devastating for exporters to the US market. Mexico and Canada are the most vulnerable but they are likely to be exempt under the new USMCA trade deal. Countries like Japan, South Korea, Germany and Sweden as well as Central European countries would be seriously affected however, just when economic conditions in Europe and Asia are deteriorating. It is possible that Trump wants a trade deal with China to open a new “negotiating front” using auto tariffs. 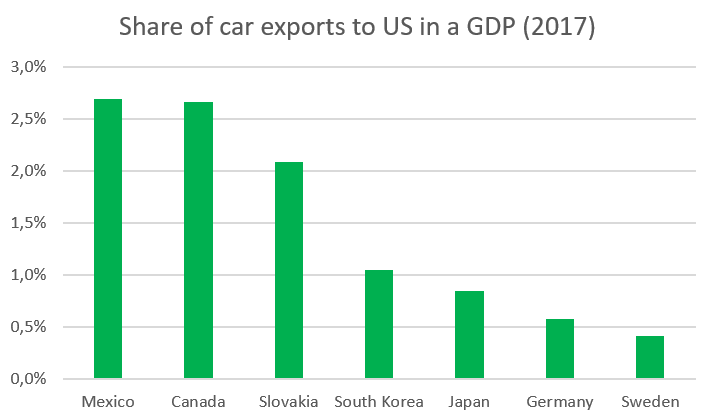 Assuming that Mexico and Canada would be excluded from auto tariffs, Japan, South Korea and Germany would be among the most affected countries. Source: XTB Research

The macroeconomic data has been mixed recently but at least one tendency has been clear: deterioration in manufacturing. The data for February has been dismal in Japan and Germany - the two manufacturing powerhouses - and investors will nervously await prints from China. Stock markets have so far ignored those risks.

Despite all the growth concerns the US500 has fully recovered from the December sell-off and we are now at the levels close to the 2815 resistance line. The last time it was tested was when markets enjoyed a truce between US and China after the G20 meeting. It is also a 78.6 Fibo retracement of the preceding decline – the same level that paused a recovery last year, albeit the correction was much smaller back then. Source: xStation5

In fact the German index has recovered from December slump as much as the US counterparty, but the chart here looks different as the DE30 had been falling for much longer. As a result we can see it completing a reverse head and shoulders formation with price already above the neck line. Having said that, the chart is not free of resistance. At the moment we are testing the downward trend line and comparing a present recovery to a similar move from spring 2018, we can set a resistance at 11775. Source: xStation5

The Federal Reserve surprised investors this week with its decision that was seen as hawkish. Gold and stocks moved lower while the US dollar strengthened....

DocuSign (DOCU.US) stock rose more than 5% despite the negative sentiment which prevails on the market today. Company shares are trading higher after Wedbush...