The Japanese ruling coalition, Liberal Democratic Party and Komeito, triumphed in the upper house elections taking place over the past weekend. It was the straight win of this coalition in Japan allowing Prime Minister Shinzo Abe to stay at the helm of the government. After the elections, his coalition holds as many as 137 seats in the 245-seat chamber. It is worth noting that the elections’ outcome was fully in line with market expectations, hence it has had a negligible effect on Japanese stocks, bonds and the currency either. On the other hand, it does matter for the economy itself because it confirmed a sales tax hike scheduled to be implemented this fall. Let us remind that the sales tax is to be increased to 10% from 8% and is to help rein in the world’s biggest debt load stemming predominantly from social welfare spending due to aging population. The first comments after elections from Shinzo Abe signalled that the government would take necessary steps to stave off downside risks to the economy coming from the October sales tax hike. On top of that, Abe said that he was not thinking about dissolving the lower house of the Parliament and he was aware of the importance of being able to talk with Iran. The Japanese yen is trading 0.25% down against the US dollar this morning while the NIKKEI (JAP225) is moving down 0.3% and the Japanese 10Y bond yield is hovering at around -0.134%. Looking beyond Japan, one may notice that other Asian indices are also on the back foot this morning with the Shanghai Composite falling 0.8% and the Hang Seng sliding 0.6%. In turn, looking at the FX space we cannot see larger price movements expect the above-mentioned yen. The US dollar is treading water and the New Zealand dollar is gaining almost 0.2% against the greenback being the strongest major currency in the morning. 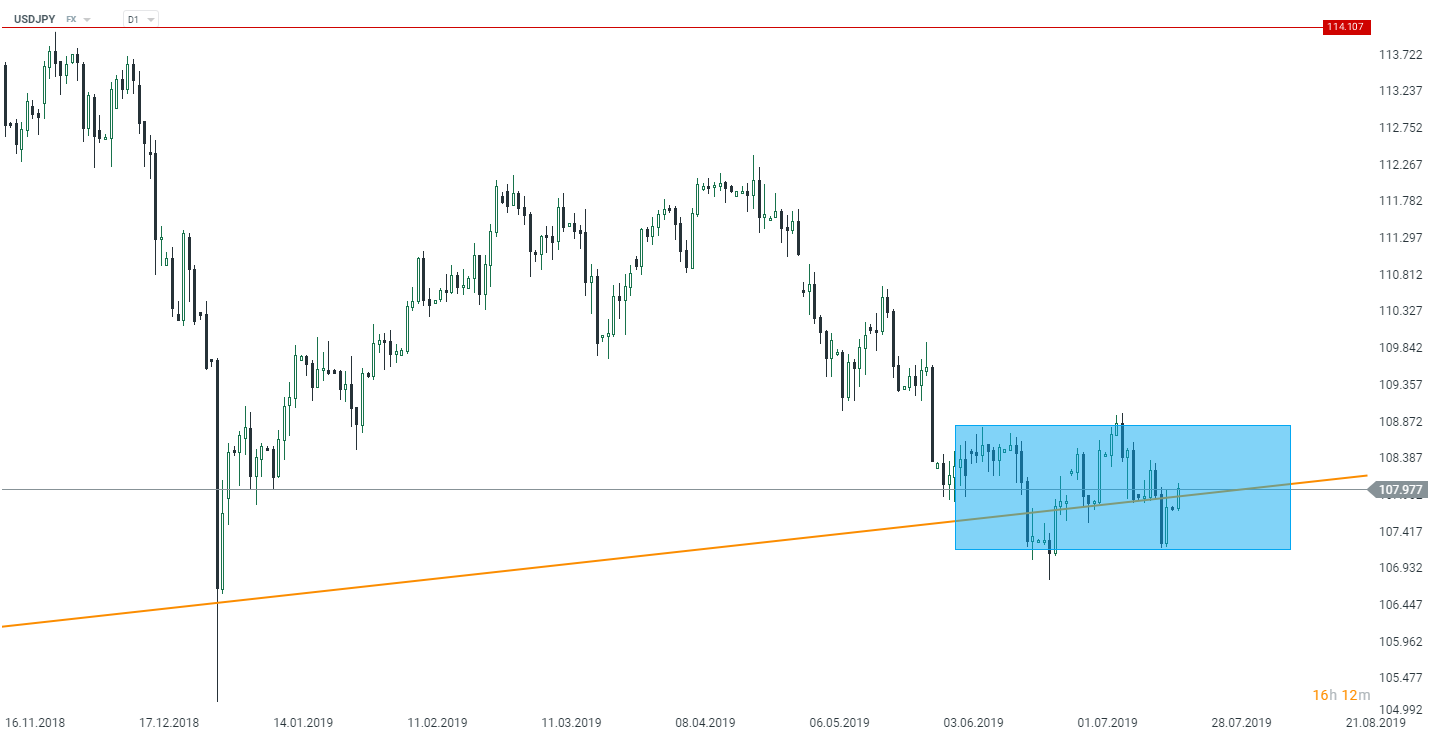 The USDJPY keeps moving within the consolidation between 107.2 and 108.8. There is no doubt that the key for the pair will be what the Fed will do next week with market expectations calling for a cut somewhere between 25 and 50 basis points. Source: xStation5

According to state-run Xinhua News Agency, Chinese companies asked US exporters about buying agricultural products and also applied for exemptions from China’s retaliatory tariffs on goods. Having that in mind, the news agency suggested that face-to-face trade negotiations between the top Chinese and US officials might happen soon. In addition to that, Beijing announced on Saturday greater openness the national’s financial sector to foreign investors. Let us remind that steps taken by some Chinese companies to ramp up purchases of US agricultural goods might be an effect of Trump’s complaints voiced in the past days. What’s next? Right now everybody is waiting to a face-to-face meeting between officials from China and the US as another step toward resolving the trade dispute.