The European morning trading is bringing a wave of optimism pushing Antipodean currencies much higher. This has been a response to revelations that the US President Donald Trump is reportedly considering a 60-day extension of the China tariff deadline which expires on March 1. Let us note that this truce between the world’s two largest economies was reached in Buenos Aires at the beginning of December. Trump said on Tuesday that it would be willing to extend the deadline beyond March 1 if the two countries were close to a deal that addressed deep structural changes to China’s economic policies. Nevertheless he added then that he was not inclined to do so. Now it looks that the trade negotiations in Beijing are going well, as Donald Trump said. Keep in mind that those talks have kicked off on Monday but ministerial-level negotiations are set to take place today and tomorrow. The higher-level talks and progress made during meetings (or lack thereof) could be decisive if Donald Trump meets Xi Jinping. Nonetheless, if the above-mentioned deadline is extended then a date when the two presidents will meet will become less important. Anyway, such revelations are boosting riskier assets this morning with both AUD and NZD leading the gains in the G10 basket. The former is rising 0.4% while the latter is rebounding 0.5% after a sharp increase yesterday caused by the RBNZ meeting. At the same time, the US 10Y yield has ticked up 2 basis points to 2.704% while the SP500 futures are pointing to a positive opening. Stock markets in Asia are less optimistic with the Shanghai Composite going up less than 0.3% and the Hang Seng (CHNComp) losing a bit more than 0.1% at the time of writing.

The NZDUSD keeps storming higher being supported by the hawkish RBNZ as well as improved sentiment in global markets. Technically the pair could continue moving up to the orange trend line where bulls might face some obstacles. Source: xStation5

On the one hand we are getting more upbeat information from Beijing concerning the ongoing trade negotiations, on the other side the January’s trade data from China could suggest mayhem once again. During the first month of 2019 China saw its trade surplus falling less than expected to $39.2 billion from $57.1 billion while the consensus had pointed to a decline to $34.3 billion. Exports surged 9.1% YoY while imports fell 1.5% YoY. Note that the median estimate had forecast a huge decline in imports by more than 10% in annual terms. What did cause such a huge surprise? We think that the Lunar New Year may have affected trade data for January and the same scenario will be evident in February. Therefore, we prefer to combine these two months to exclude some distortions due to the Chinese New Year which falls either in January or February. Thus the lower than forecast decline in imports was probably caused by an increased demand ahead of the New Year’s proceedings. However, it was not the case when we look at the US. China’s imports from the world’s largest economy plunged 41% YoY while exports dropped 2.4% YoY. Anyway, to assess the full impact of the Chinese New Year we have to wait another month, then more longer-term conclusions could be drawn. 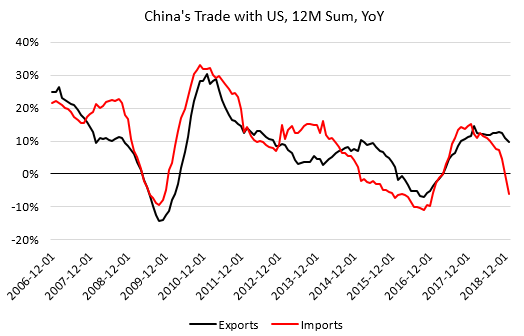