Australian inflation for the first quarter was by far the most important piece of data from Asian economies this week. Over the period price of growth slowed down more than anticipated sending the Aussie dollar much lower. 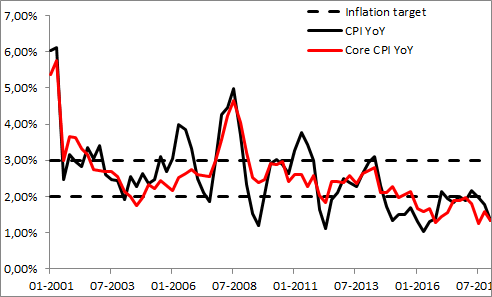 In annual terms headline inflation slowed to 1.3% from 1.8% while the consensus had suggested 1.5%. Core measures also came in below expectations with trimmed mean falling to 1.6% from 1.8% (exp. 1.7%) and weighted median declining to 1.2% from 1.6% (revised down from 1.7%) while the consensus had called for a marginal slowdown of 1.6% compared to the initial reading for the fourth quarter of 2018. The report caused sizeable declines in the Australian dollar pulling down risk sentiment across G10 space. The AUDUSD is trading 0.9% lower at the time of preparing this analysis while the NZDUSD is going down 0.5%. From a fundamental point of view the data increased odds for a rate cut as soon as May. Based on the market-based likelihood of rate cuts in Australia one may notice that a cut is already priced in by October, with 56% chance to see such a move as soon as next week. Note that the RBA’s inflation target has been elusive for many months with core inflation just shyly approaching the lower bound of this objective. While lower headline growth was chiefly driven by automotive fuels falling as much as 8.7% compared to the previous quarter, more subdued domestic price growth could signal weaker economic activity on the horizon. Moreover, despite low unemployment we have yet to see any notable increase in wages, however, it has been the case elsewhere too.

Technically the Aussie dollar has fallen toward the supply zone localized somewhat above 0.7020. This zone played an important role in the past, hence it is reasonable to judge that the similar case could be this time around. Source: xStation5

The second session after Easter was particularly positive for US investors as both SP500 and NASDAQ hit a new all-time high. The SP500 gained 0.9% while the tech index surged 1.3%, the Dow Jones added 0.6% and closed slightly below its previous record high. Strong corporate earnings were among reasons behind such excellent performance. Twitter shares rose sharply more than 15% as the company reported EPS of 37c, easily beating the median estimate of 15c. Revenue was $787 million and also came in above expectations of $776 million. Moreover, a number of monthly active users - a very important gauge for social media companies - was 330 million, smashing the consensus of 318 million. Other companies also provided solid results when then translated to good performance of their shares. For instance, Hasbro rose more than 14% while Coca-Cola jumped almost 2%. In turn, Procter & Gamble was the largest drag on the market falling 2.7% after reporting a decline in its operating margin for the third quarter.

The NASDAQ (US100) broke its previous highs on Tuesday. Technically the next target for bulls could be set at around 8100 points. Source: xStation5