The Australian dollar is losing the most against the US dollar when it comes to major currencies this morning which is a result of quite a disappointing release from the labour market. In addition to domestic economic data, the Aussie is also being burdened with a deterioration in risk sentiment as evidenced by declines across global equity markets. 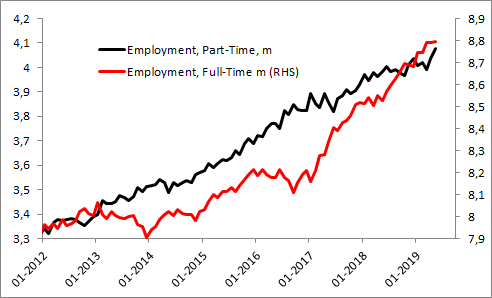 The Aussie dollar is falling against the USD as FX traders are digesting the May labour market release. Anyway, the underlying employment trend there remains quite robust. Source: Macrobond, XTB Research

In May, the Austrlian economy added 42.3k new jobs which, on the face of it, seems to be the excellent number. However, almost the entire increase came from part-time jobs as they increased as much as 39.8k, while full-time jobs rose just 2.4k. It needs to be noticed that this was another month in a row with such a structure in employment. In April, overall employment rose 43.1k but the entire increase was due to part-time jobs. A slight disappointment came also from the jobless rate which stayed unchanged at 5.2%, missing the median estimate of a fall to 5.1%. On the other hand, the labour force participation rate ticked up to 66% from an upwardly revised 65.9% in April - it means the rate reached its record high. What does it mean for monetary policy there? Market participants are almost certain the Reserve Bank of Australia will pull the trigger once again in August assigning more than 80% odds for such a scenario. However, there is no doubt that markets tend to overreact (look at the current pricing in the US) and given the latest comments from RBA Governor Philip Lowe we doubt the RBA will want to slash rates much further (one rate cut is on the table, however, it will depend on what the Federal Reserve does in the nearest future). Let us recall that according to Lowe monetary policy easing is not the ideal path to boosting hiring and investment, hence the government should also undertake some structural reforms.

The AUDUSD is continuing its march to the downside after a failed attempt to break above 0.7020. The closest support could be found nearby the lower bound of the channel. Source: xStation5

In the wake of the weak session on Wall Street yesterday, Asian equities are trading mostly lower as well. The Japanese NIKKEI (JAP225) is falling 0.7%, the Shanghai Composite is trading subtly above the flat line while the Hang Seng (CHNComp) is losing 0.7%, at the time of preparing this commentary. In terms of reasons behind these falls one may cite US President Donald Trump who said on Wednesday that he had no deadline for China to return to trade talks. It suggests that the ongoing trade dispute is likely to last for some time being a major downside risk for global economic growth.

Overnight, we were also offered several comments from the Chinese FX regulator - the State Administration of Foreign Exchange (SAFE). It reiterated that it would keep the yuan stable at reasonable and balanced levels. On top of that, it added that Chinese FX reserves were steadily rising and China would steadily push forward with opening up of capital account. The SAFE concluded that there was huge potential for foreign capital flows into China. Let us recall that the CNY/USD exchange rate has been eagerly discussed recently as some market observers expect the yuan to fall beyond 7 as China wants to offset a tariff effect.

The Chinese yuan fell heavily against the US dollar in May on the back of a further trade war escalation. Source: Bloomberg