World's attention is focused on the Russian invasion of Ukraine. Return of a large military conflict to Europe shattered a decades-long peace period on the Old Continent and sent shockwaves through the financial markets. Chinese indices took a significant hit recently but war in Ukraine was not the prime driver of moods in the country. Another day of heavy selling took place today with major Chinese indices dropping 4-6%. Let's take a closer look at the situation on the Chinese stock market and try to answer whether woes are already over.

The Chinese CHNComp index is trading 25% lower year-to-date and 50% below its early-2021 high. However, the drop in the Chinese stock market was not triggered by the war in Ukraine but by the resurgence of Covid pandemic in the country. The highest number of new Covid cases since February 2020 was reported today. New Covid cases continue to be reported in other parts of the world as well but markets' reaction is not as severe as in case of China. Why? China has stuck to a zero-Covid policy since the beginning of the pandemic, meaning that it is quick to impose harsh restrictions in order to combat local outbreak of the virus. As a result, economic activity in the country as well as mobility is impacted.

This will be a hit to the Chinese economy and whether it is big or not will depend on how quickly China tackles new outbreaks. Nevertheless, lockdowns were already announced in Shenzhen and Langfang cities, and a lockdown decision in Jilin province is expected to be imminent amid a spike in new cases there. Lockdowns in China will also prove to be a hit to the global economy due to supply chain disruptions. In fact, they already are - Foxconn, Toyota and Volkswagen already announced they will have to suspend production in areas under lockdown.

Covid-19 is not the only factor pressuring Chinese stock recently. The strongest sell-off can be spotted in the Chinese tech sector. This is a result of a long-lasting issue of data security between the United States and China. The US has limited participation of Chinese tech companies in its economy and China approved regulations that are said to make such companies serve the state more and customers less. More regulations aimed at controlling internet companies are expected to be passed soon. Technological stand-off between US and China also creates a risk that Chinese tech shares will be delisted from US exchanges. However, such a move has been rumored for over a year now and no such thing happened yet.

While continued regulatory actions against Chinese tech companies and a worsening pandemic situation are the main drivers of recent underperformance in Chinese shares, war in Ukraine also has some impact. More precisely, China's stance in this war. While China advocates for a diplomatic solution, it also failed to condemn Russian aggression. The United States warned China that it could face sanctions on its own economy should it decide to supply Russia with military equipment. As Chinese authorities pay more attention to the condition of the economy than Russian authorities, such warnings may make Beijing think twice before making a move.

Stock sell-off in China - an opportunity?

Judging whether the current sell-off in China is a buy opportunity or a bulls' trap is not an easy task. Risk of China providing Russia with military support cannot be entirely ruled out. However, such a move would provoke a response from the United States and it does not look probable that China would put its economy at risk in order to support Russia, which is collapsing under Western sanctions. While siding with Russia could help China dethrone the United States as global economic leader in the long-term, short-term effects of such a move would be devastating for the Chinese economy. Not to mention that war in Ukraine and subsequent Russian ban on grain exports may limit food supplies to China and make engaging in any conflict even more troublesome. The biggest risk for China - and still largely underpriced - seems to be continuation of pick-up in new Covid cases and resulting lockdowns. Unless improvement on this front is spotted, Chinese indices may remain under pressure.

Taking a look at forward P/E ratio for Hang Seng China Composite (CHNComp) we can see that index valuation has not dropped to extremely low levels yet. Ratio dropped below 7, just as it was the case during Covid panic. However, this ratio dropped to as low as 6 in 2016, signaling that there is still some room for further sell-off. Especially given the poor Q1 earnings season in China and current build-up of risks. Historically, a drop of forward P/E below 6 was an opportunity. 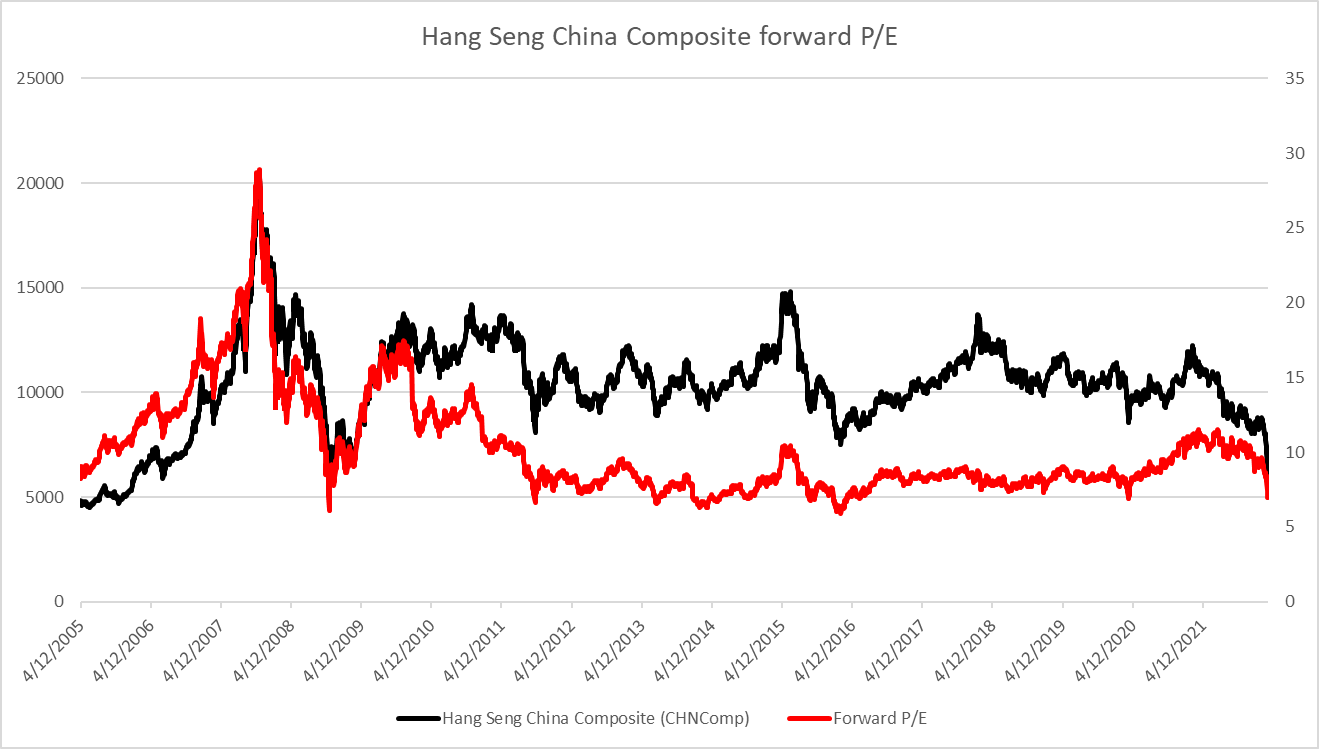 Forward P/E ratio for the CHNComp index dropped below 7 but historically levels below 6 were seen as an opportunity. Source: Bloomberg, XTB Research

A look at charts

As we have already mentioned, CHNComp is trading 25% year-to-date lower. The index dropped not only below its 2020 lows, reached during Covid-19 panic, but also below early-2016 lows. Concerns over the condition of the Chinese economy were present even before the recent jump in Covid cases as soaring commodity prices risked a slowdown in the country. Index is in freefall mode and approaches a mix of two long-term supports in the 5,700 pts area - 161.8% exterior retracement of post-pandemic recovery and 127.2% exterior retracement of the 2016-2017 upward move. Investors can get exposure to the Chinese internet sector, that is underperforming currently, by investing in KraneShares CSI China Internet ETF (KWEB.US).

Investors can also use KraneShares CSI China Internet ETF (KWEB.US) to gain exposure to the Chinese internet sector. This ETF dropped 80% off its peak in mid-February 2021! Source: xStation5

Shares of Gamestop (GME.US) and AMC Entertainment (AMC.US) today rebounded from the recent period of 'slow' trading, while Bed Bath Beyond (BBBY.US)...

Silver at a key technical area

Silver is currently testing a very important area. This is the 50-day moving average and the range of the largest correction in the trend. Silver...

The Chinese CHNComp index remains under pressure on Monday despite the fact that recent trade data from the world's second biggest economy released...