Bitcoin price craters; how low can it fall?

Bitcoin's price is down by 30%, Ethereum by 40%, and Bitcoin Cash has fallen two thirds from its recent local high. After a quiet period in the digital coin space, big moves are leading sharply lower. Are cryptocurrencies done? How low can they fall?

$6000 looked like a concrete floor… but it eventually failed

Cryptocurrencies are in the spotlight once again, but the mood is in stark contrast to last year.  One just cannot underestimate consequences of a technical break of the $6000 barrier. Although technical analysis only really applied moderately to cryptocurrencies in the past, it's becoming clear that more and more investors are looking at the charts and thus the key demand zone for Bitcoin is becoming absolutely critical not only for the currency, but for the crypto market as a whole. Let's take a look at direct consequences first; for Bitcoin it was a very pure technical move – following a long consolidation in a narrowing triangle (which is generally a continuation pattern) and a break of $6000 on major momentum provided a very clear signal. Normally the longer the consolidation, the bigger the move and thus the brutality of this sell-off is not surprising. A weak support of $4900 has been easily broken and the next and key one is as low as $3000. This is also a textbook range of the triangle. 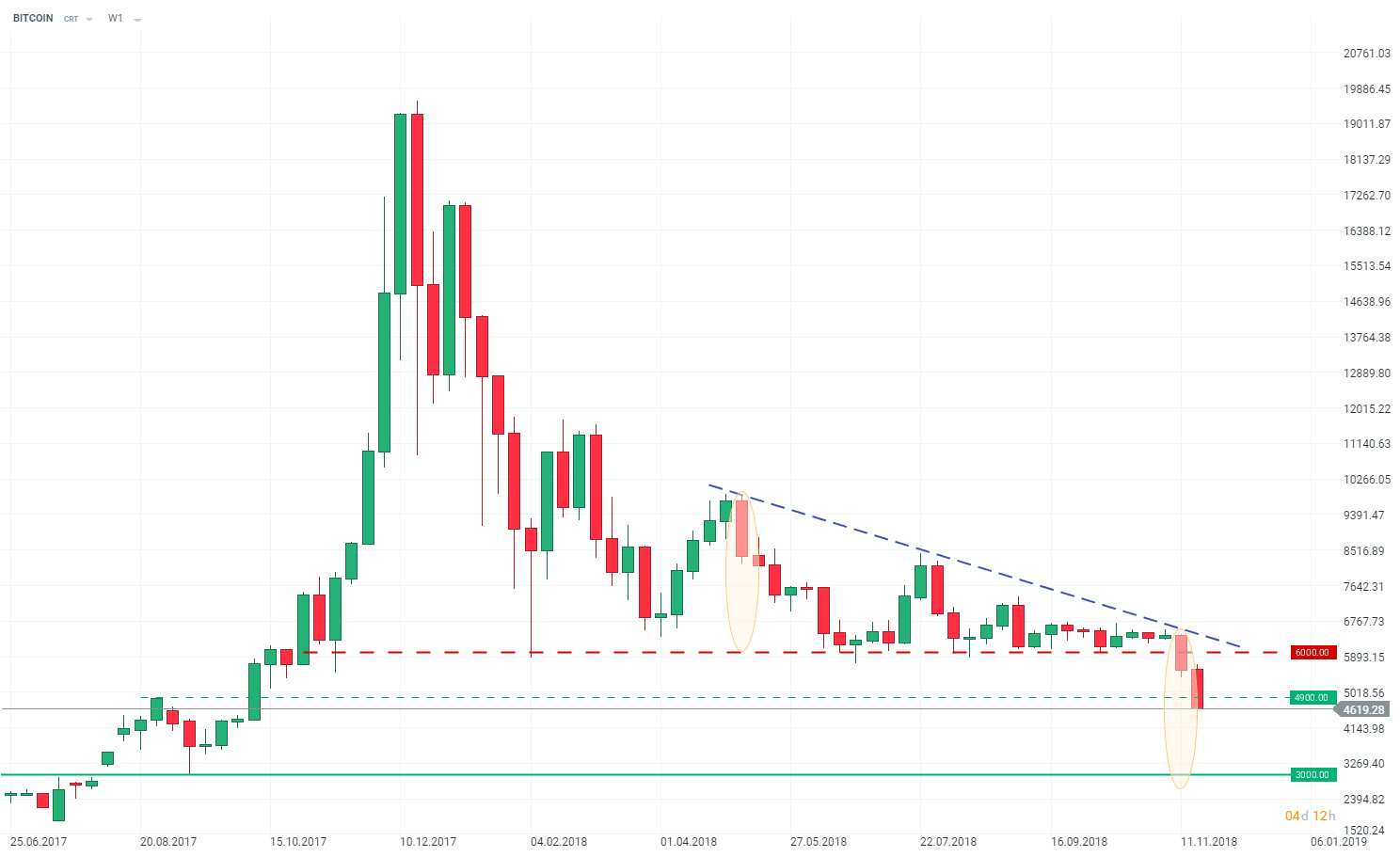 Bitcoin literally crashed through the $6000 support with the next major level being just half of it. Source: xStation5

As we wrote in the analysis last Thursday a landslide on Bitcoin price was caused by its smaller brother Bitcoin Cash. Bitcoin Cash is a byproduct of one of the first forks – splits of a blockchain creating two separate cryptocurrencies. Bitcoin Cash was about to be a better, more efficient version of Bitcoin but recently it underwent a fork of its own as competing camps of developers were unable to agree on software upgrades. It’s not the first nor the last fork in the community but this particular one highlighted challenges that lie ahead on the path of global crypto acceptance. To be honest, Bitcoin withstood far worse news in the process – coin thefts or fraudulent IPOs among others. It just seemed that it was too much at that point for investors and the avalanche started.

Certainly not. Just today we got news that two prestigious organisations, IBM and Columbia University, will be working together on blockchain technology.  It looks at this stage investors want not just a vision but specific applications, with Ripple price seemingly confirming that. RippleNet has just added CIMB, a large Malaysian bank to a portfolio of its clients looking to work on a system of instant payments. Although there are concerns about a giant supply of the XRP, very direct business applications provide a footing for its price – Ripple is the only major coin that was able to resist downward pressure and used the $0.40 support for another rebound. 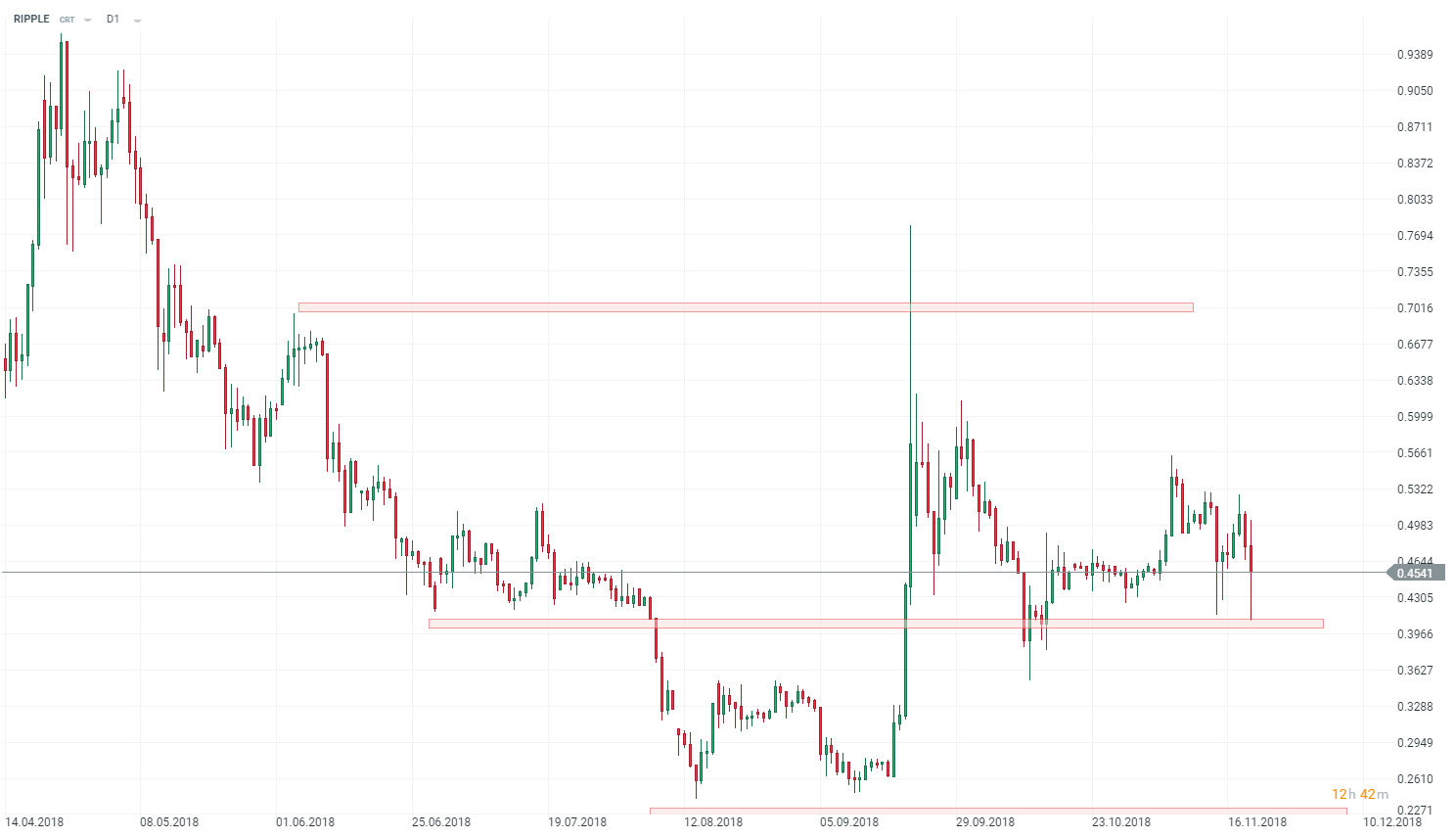 Ripple has been impressively resistant as another defense of $0.40 support allowed for a controlled move higher. Source: xStation5

For other currencies business applications seem a bit more elusive and it’s hard for investors to value the coins – including Bitcoin. This very often leaves them with a technical outlook as the best indicator of price dynamics.