While broad equity market indices like S&P 500 (US500) or HSCEI (CHNComp) are usually the most closely followed by investors there's also the option of trading more sector specific indices, the newly-launched FANG index being a prime example. The FANG+ index tracks performance of some of the most innovative companies quoted on the US stock markets. FANG+ CFDs were launched on the xStation platform today and in this analysis we will take a closer look at the index. 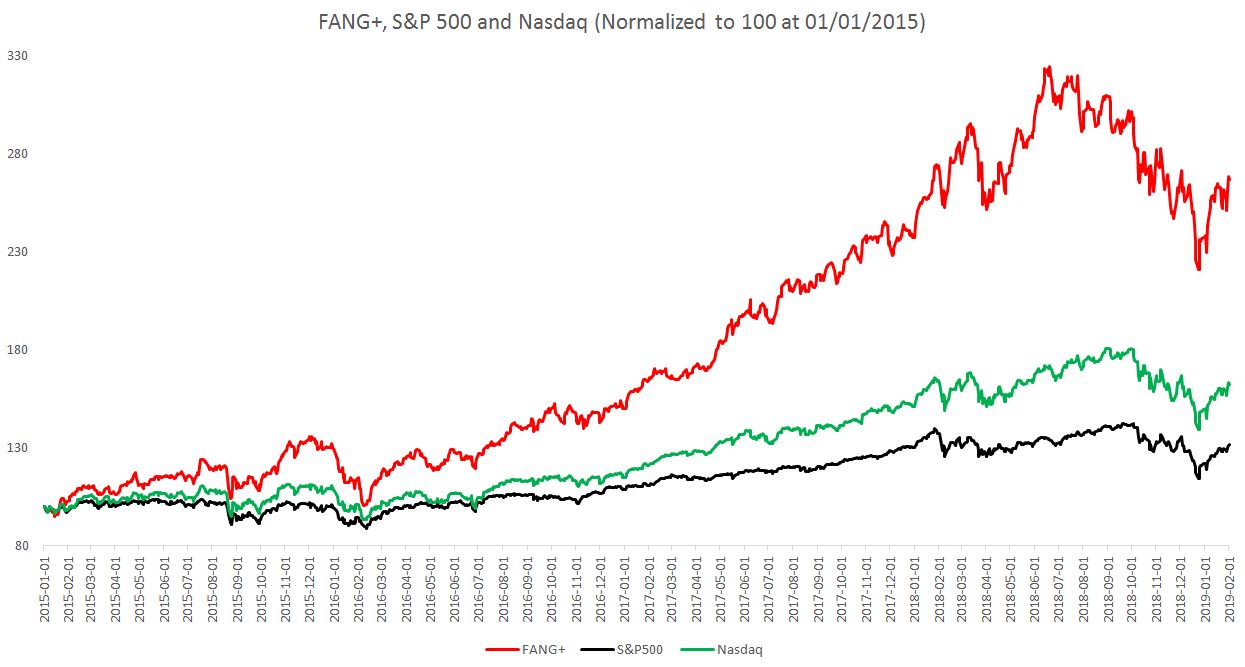 FANG+ index has outperformed S&P 500 and Nasdaq by a huge margin since 2015. However, it should be noted that the index also took a bigger hit in the aftermath of the latest stock market turmoil. Source: Bloomberg, XTB Research

We should start the analysis of FANG+ index by taking a look at what moves this index. The index consists of highly-liquid growth stocks that trade on the New York Stock Exchange or Nasdaq market. The minimum number of stock in the index was set at 10 and this is also the number of stocks that are part of the index right now.  Among FANG+ members one can find:

As one can see FANG+ index is heavily biased towards technology and consumer discretionary sectors. Due to a high degree of correlation between businesses of these companies and the overall condition of the economy this index tends to outperform broad market at times of expansion and underperform when the economy is struggling or uncertainty is on the rise.

Now as we already know which stocks form the FANG+ index, the question remains which of these companies have the biggest impact on  valuation. Luckily, the answer is simple - none of them. This index is equally-weighted; therefore each component is as important as any other. The index is reviewed for rebalancing each quarter after the session-close on the second Friday of March, June, September and December. The rebalancing takes effect one week later.

The FANG+ index underperformed for the major part of the second half of 2018. As FANG+ members are often highly leveraged companies rising interest rates in the United States made investors grow concerned over the cost of debt servicing. As depicted in one of the charts above, the pace of FANG+ index declines exceeded the one of Nasdaq and S&P500, just as it was the case with gains 2015-2017. The price action of this index may remain volatile and indecisive as long as trade tensions continue to dominate markets. Investors with exposure to the US tech sector may use this index as the way to hedge.

You can find FANG+ CFDs on xStation5 under the USFANG ticker. Investors can take both long and short positions via CFDs allowing them to benefit at times when the market is rising as well as when it is falling.

FANG+ (USFANG) managed to break the downtrend structure that was building since mid-2018. The index finished last week’s trading a notch above the previous swing level around 2500 pts handle. In case the upward move is extended the first level to watch for bulls could be the 2650 pts area where one can find medium-term resistance zone as well as 200-session moving average (purple line on the chart above). Source: xStation5