There’s been some headline news on the tariff front in the last couple of hours which come as a timely reminder that this remains a potential big catalysts for the markets in the coming weeks. The reports state that the US is asking China to shift their retaliatory levies on agricultural products and that Beijing is considering the request. This remains one of the thornier issues on the trade front between the world’s two largest economies and a resolution would be seen as a big step forward.

Also on this issue Treasury Secretary Mnuchin has said on Fox Business that there is more work to do with China including enforcement in what is a little bit of a hawkish comment. While it feels like the stock markets have already discounted positive news on the trade front many times over, it is still worth remembering that the US and China are yet to reach an agreement and this remains a big source of event risk for global equities.

The S&P500 broke above the 2900 level on Friday to post new highs for the year and this region could now be seen as possible support on any dips. All-time highs are now around just 35 points away. Source: xStation

There’s not much on the economic calendar this afternoon with some regional manufacturing data and a speech by FED member Evans the only two that are noteworthy. The Empire State manufacturing index rose to 10.1 from 3.7 for the current month, coming in above the 8.1 consensus forecast. This is the highest reading since December and means that 2 of the past 3 releases have now beaten forecasts. Having said that a figure of just over 10 is still relatively low compared to recent years. 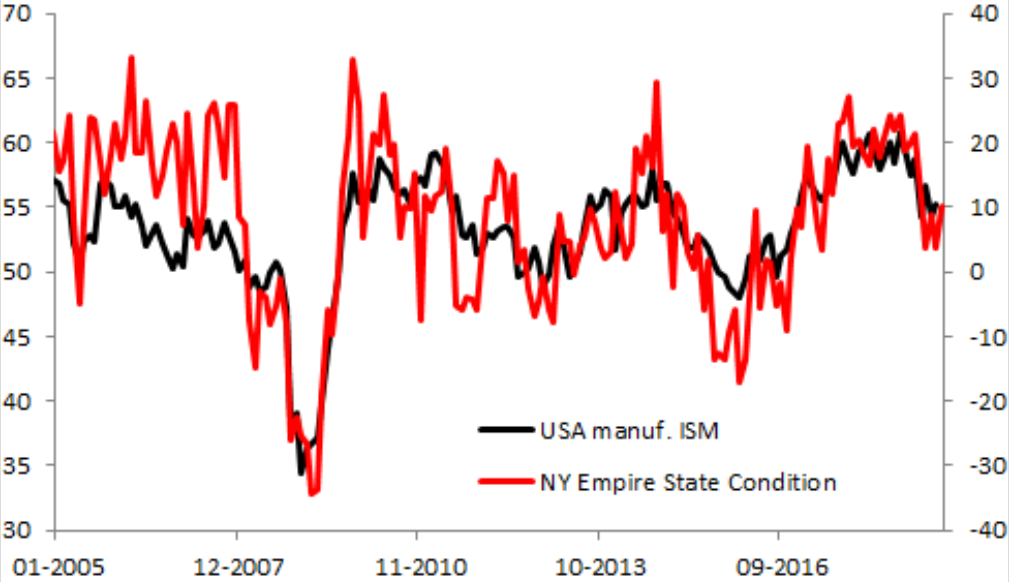 A recovery in the Empire state reading this month is welcome, but this metric is still relatively low compared to recent years. Source; XTB Macrobond

As earnings season kicks into full swing, Goldman Sachs is attracting attention this afternoon after the bank delivered what could be described as a mixed update. On the bright side a $2.25B profit for the first quarter equates to $5.71 a share vs an expected $4.89 but a 13% drop in revenue in a key business unit to $8.81B is a concern. Some drop for the bank’s Wall Street trading and investing and lending segment was expected, but with analysts predicting revenues to come in at $8.9B the decline was greater than expected. Shares have begun lower by around 1.5%.

Goldman Sachs shares have pulled back on the open to trade around the level they broke higher from on Friday. 210 could be a key region to watch with the recent highs coinciding with the 200 SMA there. Source: xStation