It’s been a strong start to the week for equities with shares rallying during the Asian session and the European morning after Chinese manufacturing PMI saw its biggest jump since 2012! Unsurprisingly this has also boosted US indices with gaps higher seen when trading recommenced last night and further gains seen ahead of the opening bell. 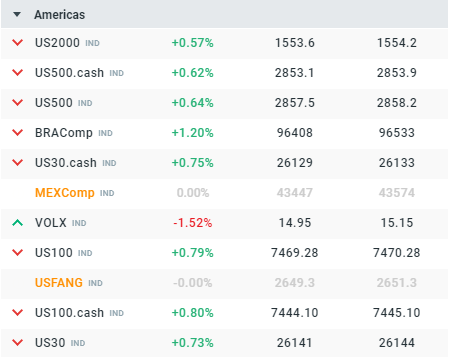 There’s green across the board for American indices ahead of their cash session, with gains of almost 1% seen in most the major markets. The Volatility index has dropped back lower to trade below 15 once more. Source; xStation

This move higher appears to be hopeful to say the least, as even though the Chinese data topped estimates the PMI readings were still barely back above the 50 mark which denotes expansion/contraction after three consecutive sub 50 readings. Furthermore it’s worth highlighting that Chinese data can be seen as not the most accurate while the PMI readings themselves are surveys, so represent opinions rather than hard data. The positive newsflow in recent weeks for instance could have an unjustified positive bias to managers sentiment. On the data front from the US it’s a big week, with the latest consumer spending figures setting the ball rolling in a pretty disappointing manner. Retail sales for February showed a M/M drop of -0.2% after an expected rise of 0.3% although the drop does appear better when the upwards revision to the prior (now +0.7% from +0.2% initially) is taken into account. The core reading was similar with a -0.4% M/M print vs +0.3% exp. Again a positive revision to last month’s (now +1.4% vs +0.9%) means it is more favourable than it first appears. 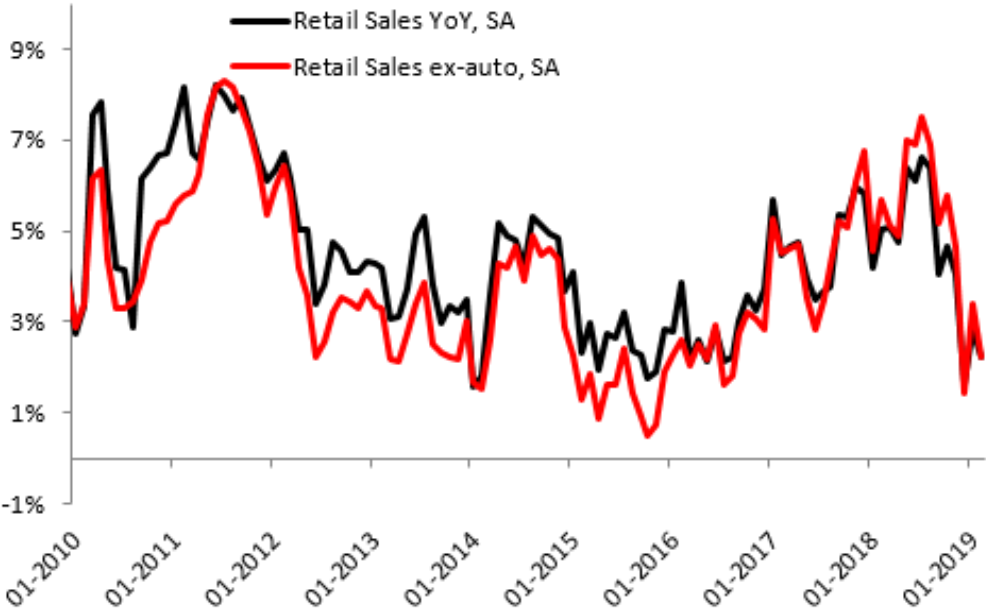 Retail sales in the US have deteriorated in recent months and the levels seen now, in terms of year-on-year percentage change, are not far off their lowest since 2010. Source: XTB Macrobond

Looking ahead the ISM manufacturing PMI from the US will be keenly followed at 3PM GMT, to see whether it supports the Chinese equivalent in providing a beat or sends a similar message to US retail sales in missing forecasts. The long-term picture for the S&P500 (US500 on xStation) continues to look constructive with the market recently printing a bullish cross (50 day SMA moving above the 200 day SMA. This is often seen as a bullish development but before getting too carried away it’s worth remembering what happened in early 2016 when this signal was printed. Similar to now, the market had printed a death cross (50 SMA < 200 SMA) a few months prior and then enjoyed an impressive recovery. However, it is worth noting that the golden cross just over 3 years ago actually signalled the near-term peak in price and there was another swoon lower - which actually took out the prior lows.

If 2015/16 is a guide, then the recent printing of a golden cross could be seen as not that positive. Just over 3 years ago the golden cross came just before another swoon lower which actually took out the prior lows. Source: xStation