⛩Is Evergrande the Chinese Lehman moment?

Evergrande is the second largest property developer in China in terms of sales. Company has almost 200 thousand employees but as much as 4 million people may be linked to the company. Over 70 thousand investors hold interest in the company, including several hundred banks and parabanks. Company has 1-1.5 million apartments in construction and manages 2.8 thousand neighborhoods in over 300 cities. Apart from that, the company is also present in healthcare, consumer products, entertainment as well as electric vehicles sectors.

Problems of Evergrande can be reasoned with the availability of cheap loans in China. Because of that, investors in China engaged extensively in speculation on the real estate market, like buying apartments as ways of investing. Conservative estimates suggest that as much as 18% of Chinese GDP may be linked to the real estate market. Other forecasts claim that this share may be as high as 25%. Evergrande has been highly leveraged but recent actions of the Chinese authorities made it unable to roll over its debt. While the company has managed to lower its debt by around 20% since the start of the year, other types of liabilities spiked.

How big is Evergrande's debt?

Evergrande's debt is estimated to be slightly above $300 billion. Loans and bonds make up only a quarter of this amount. The remaining part is made up of commitments to suppliers and contractors. Bonds issued abroad (in other countries than China) are worth $20 billion. While foreign debt is relatively small, it should be noted that Evergrande is one of the largest corporate bond issuers in the emerging markets. Potential collapse of Evergrande creates a real risk of default from other highly-indebted companies. Fitch says that Evergrande has to pay $129 million in interest in September alone while coupon payments needed to be paid out by the end of 2021 amount to $850 million. Bonds worth $7.4 billion are maturing next year. 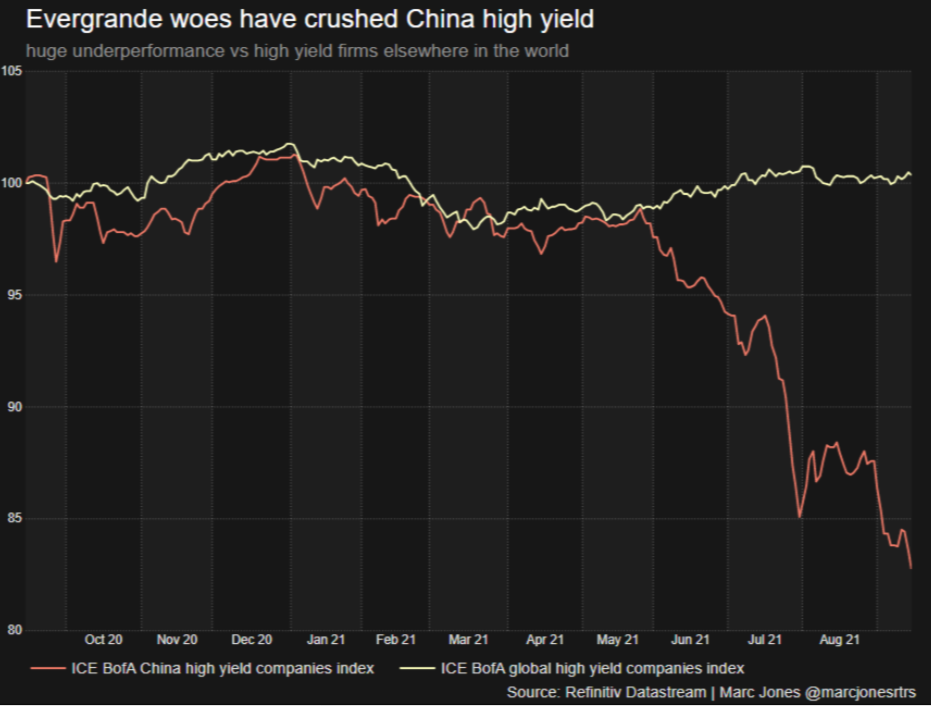 Evergrande's issues led to a big jump in financing costs for other companies with big piles of debt. Source: Reuters

This is unquestionably the biggest financial risk Xi Jinping administration has faced. Regulators have warned about the situation for some time already and it has allowed Evergrande's debt to decrease. Nevertheless, collapse of such a high-profile company would likely lead to significant problems in the Chinese banking sector and may trigger more defaults in the Chinese real estate sector. On the other hand, Chinese authorities have means to prevent a crisis. There are some rumours that any help from the Chinese government will be targeted more towards banks and citizens rather than real estate companies. State-controlled bankruptcy may get out of control quickly and, without a quick support, may trigger a liquidity crisis

Markets, encouraged by Fed actions, got used to buying dips in the market. Such a potential dip may be spotted on the CHNComp (index trades near 2016 and 2020 lows). If Beijing decides to take quick action, the current sell-off may be used by bulls as an opportunity to enter the market at favourable levels. However, traders should keep in mind that the resulting liquidity crisis could have serious consequences not only on the Chinese market but also abroad. China has shown numerous times that unlike in the case of the Fed, market sentiment is not its top priority.

Hang Seng (CHNComp) has been dropping hard in the past few months. Share of Evergrande and other real estate companies in the index is rather limited, especially at current valuations. Should the Chinese state support banks and citizens, the collapse of Evergrande does not need to be as bad. China may try to use the situation to lower house prices and make them more affordable for those that need a home, not an investment. Source: xStation5

Beyond Meat (BYND.US) stock plunged more than 14% during today's session after the producer of plant-based meat substitutes lowered its third-quarter...

US dollar strengthened, while both Dow Jones and the S&P 500 retreated from record levels following Fed Powell comments during a Panel Discussion...