Bitcoin price is rallying again – it is up 73% from a low seen back in December 2018. While a surge in price is clear and systematic, motives behind the move are less obvious. In this analysis we focus on the stories that are linked to a recent rally and analyze the BITCOIN chart.

It cannot be disputed that a blockchain technology has plenty of potential and it’s been tapped by many private and public institutions. The latest sign of this is a news that the IMF and the World Bank are working on their own token. Obviously this will not have typical commercial properties and the goal is to understand the benefits of the blockchain technology but it means that the concept standing behind Bitcoin has been the right one and in that sense it validates the cryptocurrency. However, the use of blockchain technology has been broadening for many month now and it’s only recently that the Bitcoin price has accelerated again.

Could the rally have an origin in a… joke?

When the BITCOIN price soared over the first three days of April some linked this move to the April’s Fools Day. The news spread informing that Warren Buffet decided to diversify into Bitcoin and that the first Bitcoin ETF was approved. Both stories were quickly denied but the price gains stayed there and were actually extended. More recently a lot of talk around Bitcoin refers to a mysterious founder Satoshi Nakamoto. Nakamoto is believed to own as much as 1 million Bitcoins and famous (yet controversial) John McAfee announced that he knew Nakamoto and could reveal his personal details. While it’s unclear how this could help Bitcoin price, it certainly drives a lot of community and media attention and coincided with the latest moves higher.

Something that could be seen as a more tangible sign is a rise in trading volumes. The beginning of April has brought trading volumes not seen since mid-December and while these volumes cooled off somewhat they are still higher than throughout the first quarter on average. That could be sign of renewed interest in Bitcoin.

Technical situation on the BITCOIN chart

BITCOIN price has been in a steady upward trend since the beginning of February. First it managed to break out of a triangle formation and then it accelerated at the beginning of April. A small profit taking that occurred in mid-April was actually more benign than in February and the price broke higher again. Looking at the sequences of impulse waves traders should observe the $6000 barrier that served as a very strong support in the second half of 2018 before being ultimately broken in November.  While there is a bearish engulfing on the daily chart, such formations have not stopped the rally so far this year. 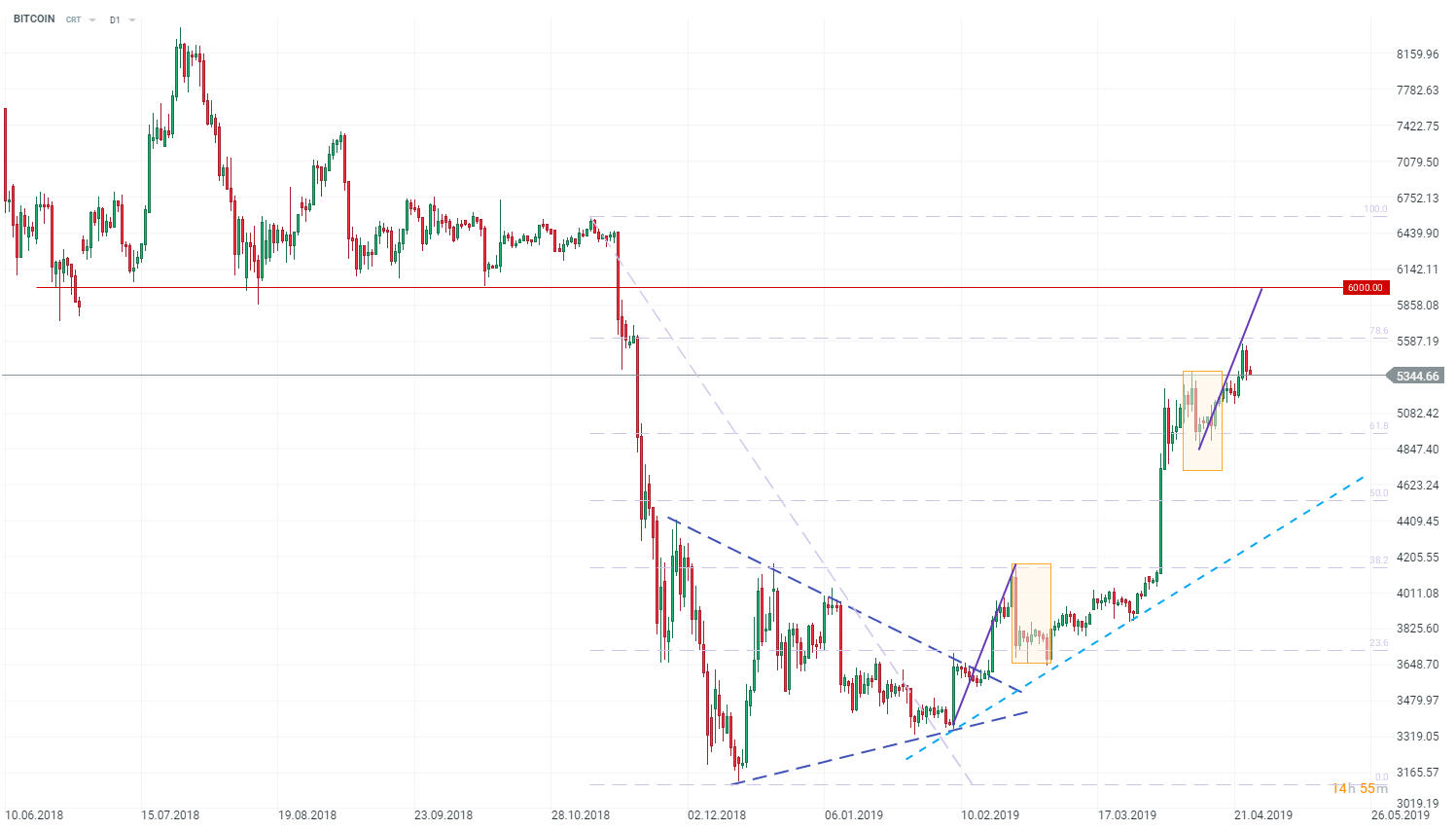 BITCOIN price could be in the 5th wave of the Elliott structure. Source: xStation5