Market Alert: what to expect from the ECB decision?

The ECB decision this Thursday is one of the most anticipated market event this year. The Bank has to respond to slowing economy and market expectations are high. In this analysis we explain what could happen and take a look at the two key markets: DE30 and EURUSD.

At the end of 2018 the ECB phased out its QE (asset purchase) program in a hope of being able to slowly increase interest rates. The economy reality has brutally revised these expectations as slump in manufacturing and trade, global slowdown, geopolitical risks and frustratingly low inflation forces the Bank back into action. The ECB has already announced that it worked on some solutions and these would be announced this Thursday. The decision is at 12:45 pm BST and the post-meeting conference begins at 1:30pm BST (13:45/14:30 CEST).

What does the market expect?

You must analyse the ECB decision in 3 dimensions: deposit rate, tiering and new QE and markets expect all of this.  Deposit rate, currently at -0.4%, is expected to be cut by at least 10bps, but a dominant view is that it will be cut by 20 bps to -0.6%. Negative rates are very painful for banks (that usually do not charge for taking deposits but are charged the deposit rate by the ECB) so it’s expected that the cut will be associated with tiering: allowing banks to deposit certain amount of money at 0% rate or a rate less negative than official deposit rate. Finally, markets expect new QE program of at least 30 billion euro bond purchases a month for at least 9 months. A combination of this expectations is the market consensus and the reaction will be driven depending on how the actual decision differs from it.

Are these expectations justified?

Ever since ECB’s Olli Rehn called for “bazooka easing” market expectations have grown substantially, pushing EURUSD lower and DE30 higher. It has come to the point when delivering more than the market expects is nearly impossible for the ECB so it looks like meeting the market consensus is the best scenario for stocks (and the worst for the euro). Can the ECB disappoint? It looks like a decision on rate cut is a “done deal” and only its size is up for a debate. The bigger question is QE renewal as some ECB members have openly argued against such decision. Therefore it looks possible that any QE can be relatively small or conditional of further economic deterioration – such decision would be clearly disappointing for investors. Mario Draghi may point out that services sector and labour market remain buoyant and leave any controversy to his successor (that will start a tenure in November).

The markets to look at: 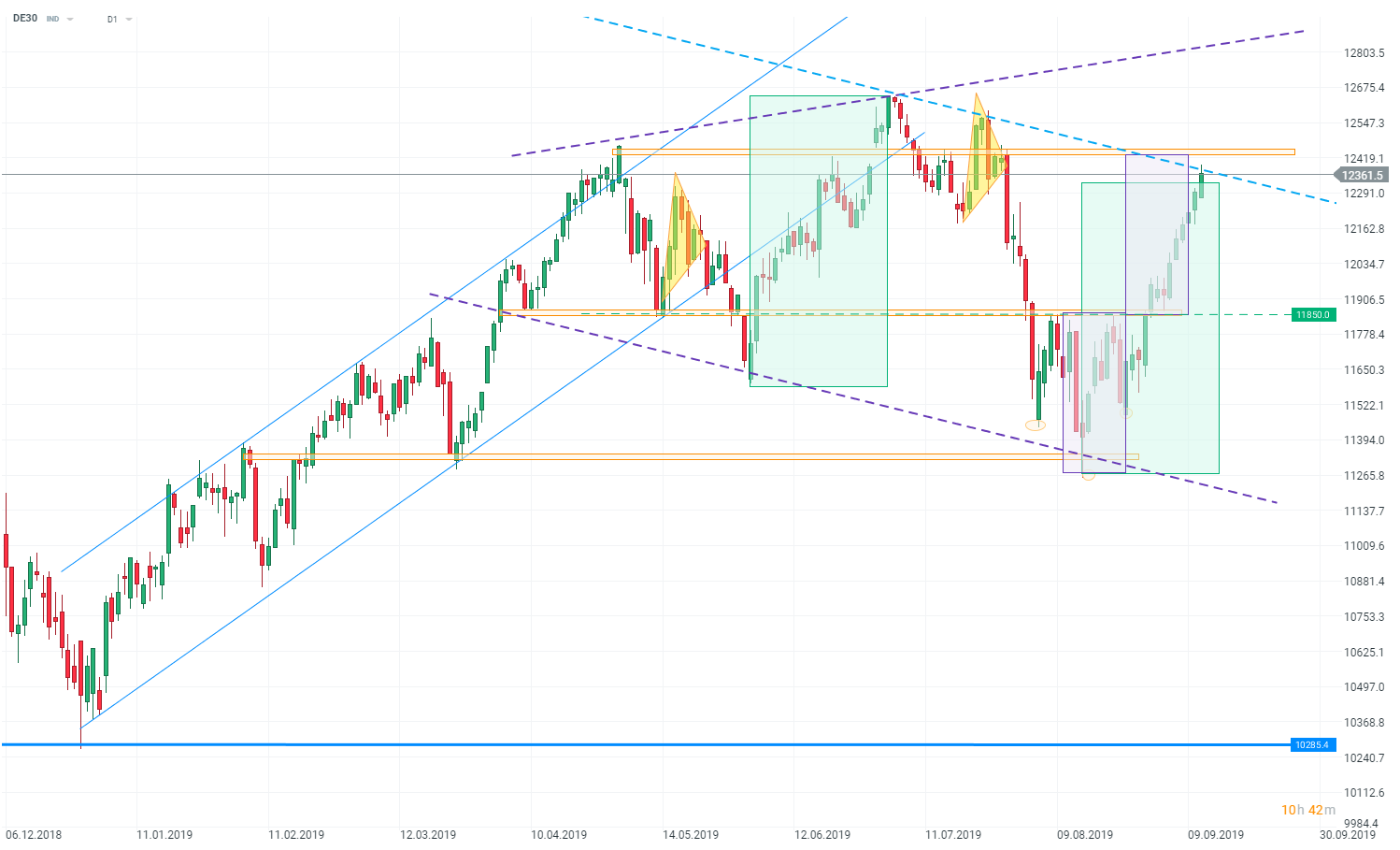 The German DE30 has seen a massive rally since late August and expectations for “bazooka easing” explain a large part of it so it’s clear that any disappointment will be visible on this market. The market has already matched expansion range from June but there’s actually a myriad of resistances – upper limit of a declining channel that is currently being tested and a full textbook range of the reverse head-and-shoulders formation at 12440. Bulls will need a good reason to move beyond these levels while there’s plenty of space from the support localized at 11850.  (Source: xStation5) 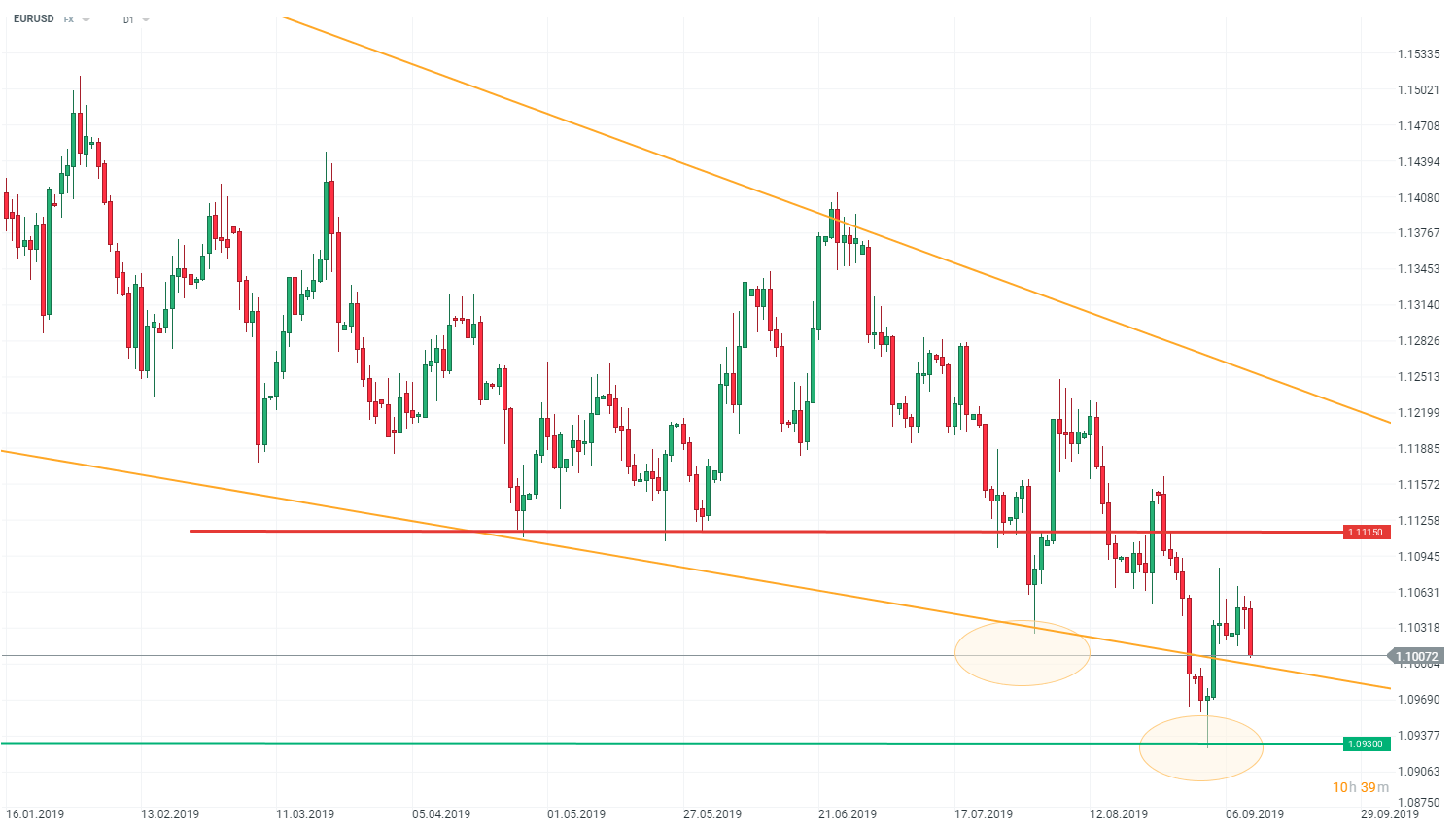 The pair has been in a clear downward trend and that has not changed despite some attempts to move higher. Normally monetary expansion is negative for the currency but bear in mind that a smaller move (small QE or no QE at all) can actually boost the euro as expectations are very high. Key levels are 1.0930 on the downside and 1.1115 on the upside.  (Source: xStation5)

The NFP report for May has just been released. Data  was expected to show another month of massive multi-million lay-offs. However, report turned...