May “hopes” UK leave with a deal

Theresa May has arrived in Brussels today, as the EU summit begins as Brexit looks set to go down to the wire. The PM is seeking support for an extension to pass her deal, but at the moment the noises coming out of the EU suggest the bloc would only be willing to pass a short extension if MPs in London pass her deal next week. This evening at 18:00 GMT a press conference with Donald Tusk, Jean-Claude Juncker and Theresa May is an event to keep an eye on but it seems like there’s not much chance of any major developments at present. The EU are standing firm and seemingly not willing to grant an extension just to find themselves back in the same position in 3 months time. What this all means is still anyone’s guess, but despite the UK parliament ruling against a no-deal Brexit, this outcome still remains the default. There’s always the possibility of 11th hour interventions, but at the moment it looks like May’s deal would still fail to gain the required support next week and if an extension is conditional on this bill passing, then the chances of a no-deal would rise markedly.

Derivatives markets seem to be getting a little more concerned with downside potential for the pound with the 1-month risk reversal falling sharply in the past week. Could be seen as occurring due to chances of a no-deal Brexit increasing. Source: Bloomberg

Given the calamitous state of UK politics with it now being over 1000 days since the Brexit referendum and we’re still none the wiser as to what our exit from the EU will look like - let alone the relationship going forward - it is truly remarkable how solid, the economic data remains. The latest figures reveal a pleasing strength in consumer confidence, as retail sales numbers topped estimates with the 3.7% increase for the 3 months to February representing the largest year-on-year rise since January 2017. Economic surprise indices for the UK are about as positive as they’ve been for a couple of years, but Brexit remains the only game in town as far as currency traders are concerned for the foreseeable future and the uncertainty is weighing on sterling. 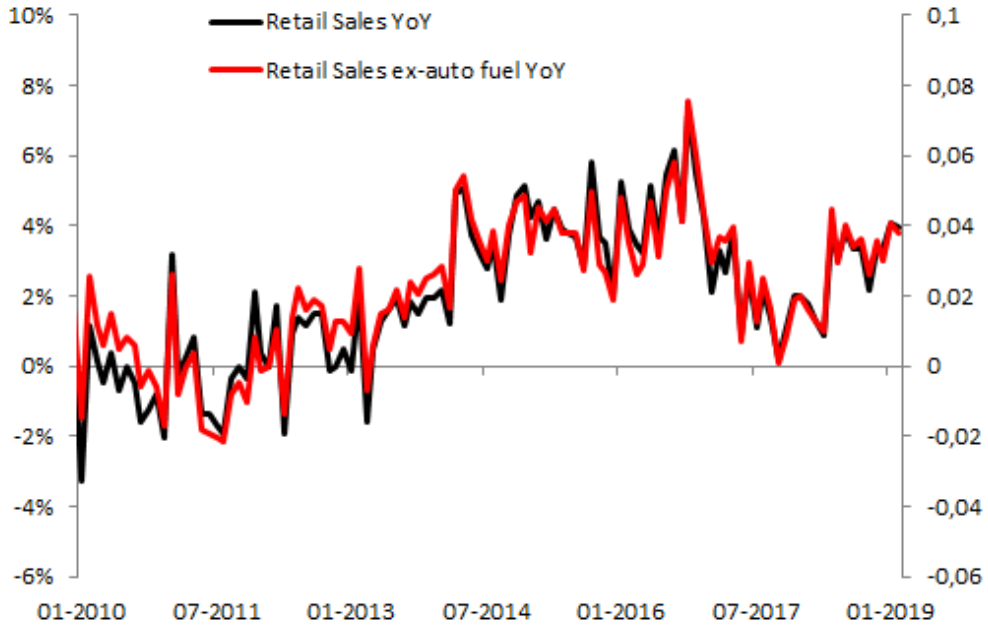 As was widely expected the rate-setters for the Bank of England have voted unanimously to keep the base rate on hold at 0.75%. It’s not surprising the bank have decided to remain in wait-and-see mode given the major political uncertainty at present, and don’t expect anything drastic from them until there’s greater clarity on Brexit.

EURGBP has rallied up to its highest level in almost a month at 0.8690 but the gains have faded in recent trade. This broadly coincides with the breakout level and with the EMAs bunching could be worth watching closely going forward. Source: xStation