The New Zealand’s dollar rallied overnight following a rate decision of the Reserve Bank of New Zealand to hold rates unchanged. The main rate is still 1.75%. However, market participants focused heavily on the statement trying to read between the lines whether the chances of a rate cut increased. The bank kept the reference that another move could be either up or down and thereby sending the kiwi much higher. Let us remind that market participants had expected that the RBNZ would follow other central banks and would alter its communique suggesting that the probability of a rate cut increased. With so many shorts on the kiwi the reaction was significant and as a result the NZ dollar is trading 1.6% higher against the US dollar at the time of preparing this analysis. Nevertheless this may have been exaggerated as the bank is still a long way off from even pondering rate hikes. 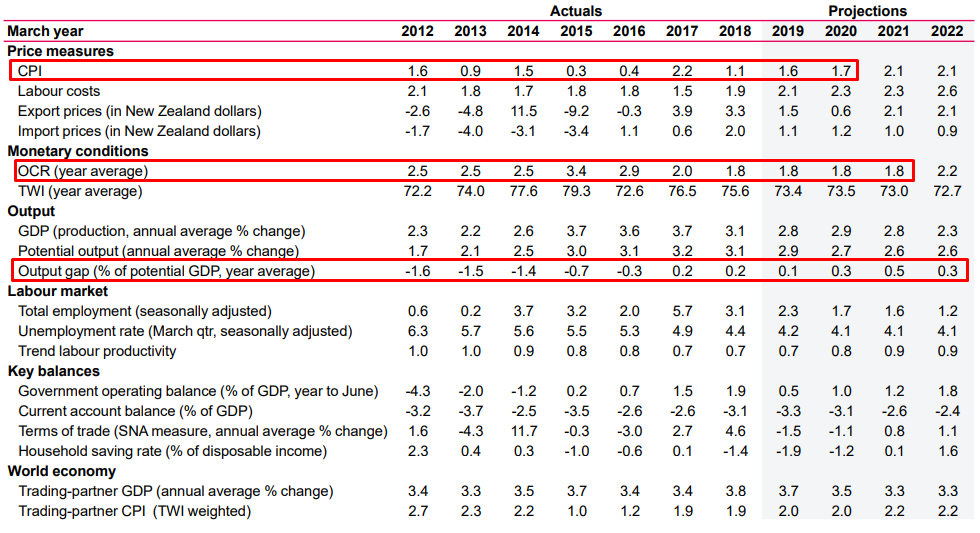 The new projections pointed to subdued inflationary pressures and to a no rate hike scenario through 2021. Source: RBNZ, XTB Research

During his press conference Governor Adrian Orr said that the chance of a rate cut had not increased, and the outlook was seen as balanced. Looking beyond macroeconomic trends in the NZ economy Adrian Orr also noticed “Trading-partner growth is expected to further moderate in 2019 and global commodity prices have already softened, reducing the tailwind that New Zealand economic activity has benefited from.” It signals that the base-case for the Antipodean central bank is to stay on hold in the foreseeable future barring a sudden slowdown in economic growth. Note that the bank is forecasting the economy to slow below its potential growth this year which should limit domestic price pressures. Over the forecast horizon the output gap is estimated to be only somewhat above zero. At the same time the RBNZ sees headline price growth to stay clearly below the objective until the end of 2020 while the OCR is anticipated to be untouched through 2021. That is not a bullish message and the only reason why the kiwi is rallying is heavy short covering. Looking forward, the kiwi is likely to be more driven by USD-related information rather than those coming from New Zealand. 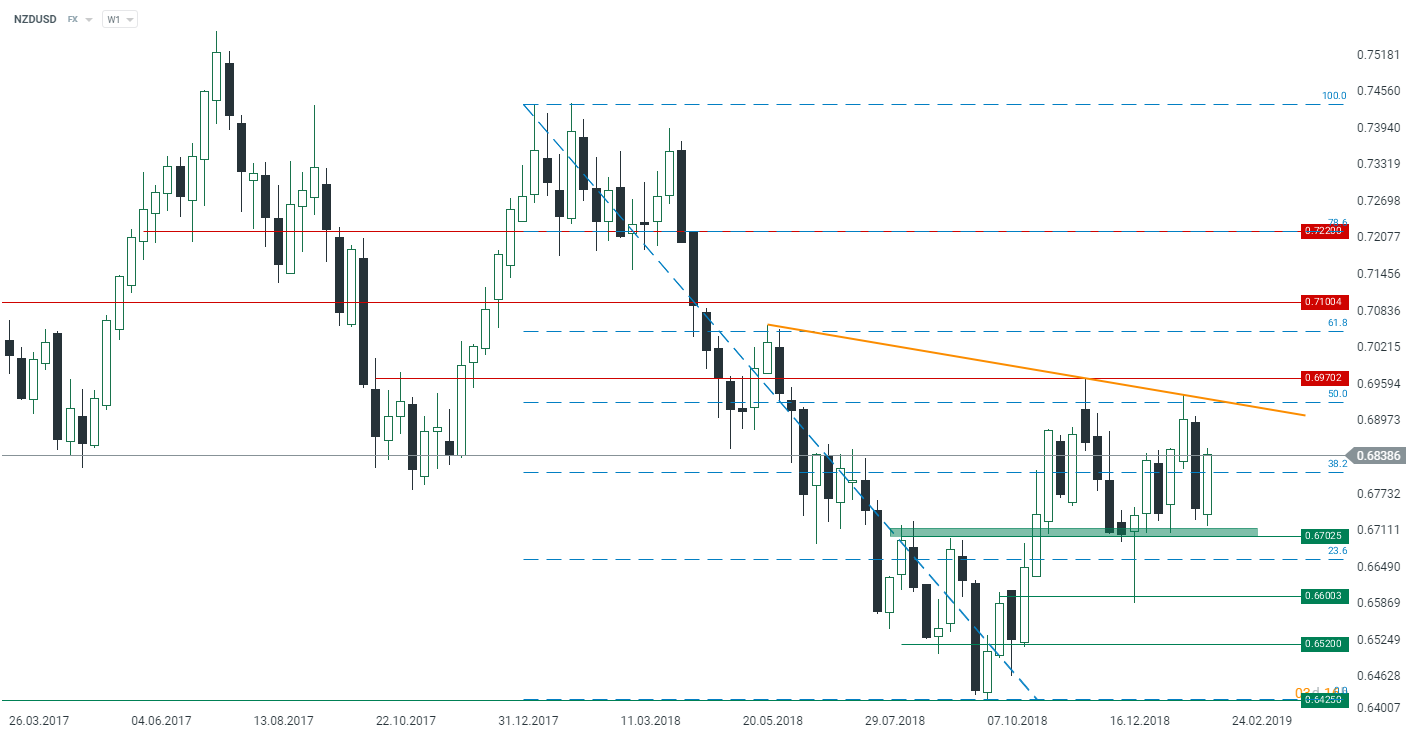 The weekly interval suggests that the rally could come to an end nearby the orange trend line being supported by the 50% retracement of the downward move from late 2017. Source: xStation5

Looking beyond changes in the foreign exchange market it is worth noting the excellent session on Wall Street yesterday. All major indices managed to grow above 1% and the SP500 futures imply a green opening today as well. Asian investors have broadly followed rises in the US. The Shanghai Composite is going up 1.9%, the Hang Seng (CHNComp) is rising 1.5% while the NIKKEI 225 (JAP225) closed 1.3% higher. Note that moods may have been buoyed by reported from China suggesting that Xi Jinping will meet key member of US trade talks delegate in Beijing on Friday. Earlier we also got some information signalling that Donald Trump could meet with his Chinese counterpart, however, there is unclear if the potential meeting takes place before a March 1 deadline. Let us also recall that yesterday we got reports suggesting that the Trump administration is open to extending the above-mentioned deadline. That kind of revelations are boosting optimism ahead of the key trade negotiations scheduled for Thursday and Friday.

The NASDAQ (US100) already approached its crucial 200DMA. This line served as a support/resistance in the past, hence it may matter this time around too. Source: xStation5