As much as 90% of the US-China trade deal has reportedly been agreed but the hardest 10% part will require a lot of trade-offs on both sides, according to Financial Times. This news boosted market sentiment over Asian hours trading pushing risk-correlated currencies much higher. However, it needs to be said that such kind of comments were offered many times in the past and they did not turn out to be significant. This is why today’s revelations should be taken with a grain of salt too. Anyway, the report brought by Financial Times also said that China still wanted the US to remove existing tariffs on China’s goods, while the US wanted China to agree to a mechanism guaranteeing enforcement of any agreement. Let us remind that high-level negotiations began last week in Beijing and they are continuing this week in Washington. According to the newspaper if no deal is reached this week, these negotiations might be extended to the end of June when a G20 summit takes place in Japan.

Another reason for an improvement in risk sentiment is a bag of encouraging data from both Australia and China. Let’s begin with the former from where we got some PMI readings. First of all, the AIG services index rose in March to 44.8 from 44.5 while final readings from CBA/Markit proved to be a touch weaker compared to the preliminary data resulting in the composite index to be revised down to 49.5 from 50, it still better compared to 49.1 seen in February. On top of that, retail sales for February came in well above market expectations producing a decent 0.8% MoM increase, the market consensus had called for a 0.3% MoM rise. Last but not least, Australian trade data also improved in February showing a 4.8 billion AUD surplus while market participants had expected a 3.7 billion AUD surplus. On the other hand, the detailed data turned out to be a bit less optimistic as exports stayed muted over the month and imports decreased 1% in monthly terms. In turn, from China we got services PMI for March which increased to 54.4 from 51.1 smashing the consensus of 52.3 points. The two strong PMI readings from manufacturing and services resulted in a rise in composite PMI to 52.9 from 50.7, the highest since June 2018. 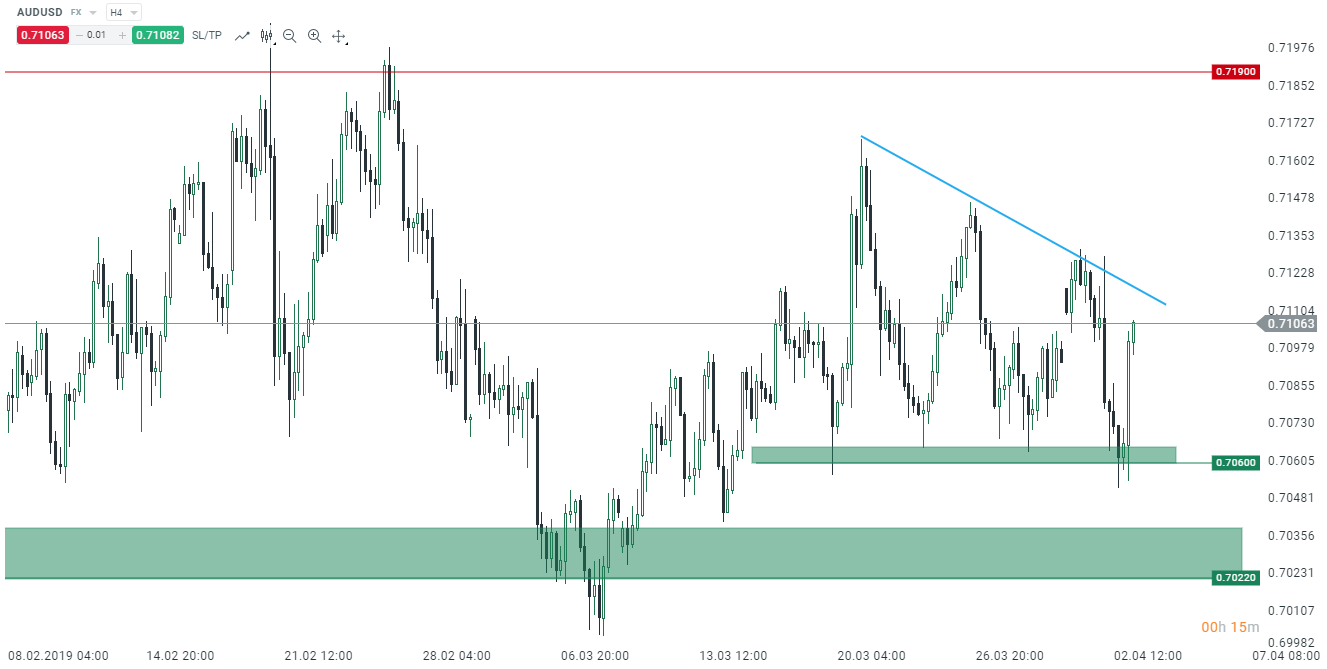 The AUDUSD spiked over Asian hours trading following a bunch of encouraging reports. Technically the pair is approaching its important trend line. This line constituted a strong obstacle for bulls over the past several days. A breakout of this line could encourage bulls to continue climbing. Source: xStation5

European equity indices and US stock market futures nosedived following report from Bloomberg. Bloomberg claims that China plans to halt purchases of US...

Markets seem cautious at the beginning of a new week ISM manufacturing to be release in the afternoon No DAX cash session due to...