The S&P500 is set to begin at its highest ever level on this afternoon’s opening bell with the futures market currently trading above the 3000 handle after earlier coming within a whisker of its all-time high at 3007. Wednesday’s session was defined by the Fed, with both Powell’s speech and the FOMC minutes offering very little reason for investors to believe that he won’t deliver a rate cut this month. The Fed chair is set to testify again this afternoon at 3PM and even though there’s a good chance that the main market moving remarks have already been delivered there could be something new for traders to react to.

The S&P500 jumped by around 30 points (1%+) in the 90 minutes that followed the release of Powell’s opening remarks yesterday.  Source: xStation

One of the biggest economic releases of the week has seen a slight pick-up in US price pressures and this could present something of a headache for the Fed. The CPI Y/Y came in as expected at 1.6%, down from 1.8% previously but the core reading edged unexpectedly higher to 2.1% from 2.0% versus and expected 2.0%. While it isn’t a big increase it is an increase nonetheless and the data could be a concern for the Fed given that they are almost unanimously expected to cuts rates at their next meeting. 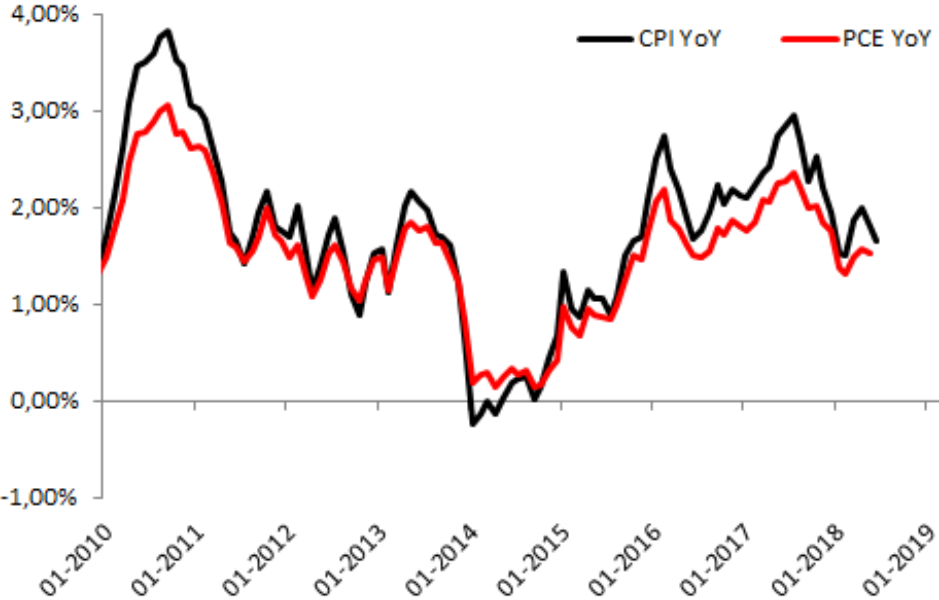 Headline inflation in the US continues to drift lower but there was a pick-up in the core reading which is not what the Fed will have wanted to see. Source: XTB Macrobond

Large cap US stocks receive the Lion’s share of attention, but it is often worthwhile to keep an eye on the small cap benchmarks. Last year the two indices fell almost in tandem, with the small caps if anything leading the way and the first couple of months of this year saw the correlation remain in tact. However, a divergence began to appear during March and in the past month or so in particular this has grown into a significant gap.

There’s a growing divergence between the US small and large cap indices with the former significantly underperforming the latter. Source: xStation

Crude inventories in the US dropped  by 7.373 million barrels in the week ended July 31st, following an 10.612 million decline in the previous week...

US ISM Non-Manufacturing PMI above expectations