Sino-US trade talks: all you need to know

The US delegation is in China this week to discuss some of the most sensitive issues in bilateral relations. Depending on the outcome of these talks we could see either a trade deal – scenario that seems to be expected by the markets, or even higher punitive tariffs on the Chinese imports. In this analysis we present key facts about these talks and take a look at 3 markets that could be affected.

What is a reason behind US-China Trade War?

During his presidential campaign president Trump often pointed at major trade imbalances and blamed “unfair” US trade deals as a major cause. Since trade with China is responsible for a major chunk of the US trade deficit, it was an obvious target of his policies. The president in the US has a major say when it comes to trade so little wonder that Trump decided to make it one of the pillars of his presidency. However, many argue that the conflict goes way beyond fair trade. The GDP of China has already surpassed 60% of those created in the US compared with just 5% at the beginning of the 90’s. China has ambitions to be a technological leader and at least a regional superpower. The US officials often hinted that these ambitions often come at the expense of the US, pointing at intellectual property (IP) theft and uneven treatment of companies. Therefore, the trade conflict may be seen as a part of a broader fight for dominance during the XXI century.

How has the conflict evolved?

While president Trump had been vocal about China since the start of his presidency, it wasn’t until March 2018 when the first tariffs were levied. Tariffs on steel and aluminum were targeted not just on China but the country quickly found itself in the eye of a trade conflict when the US levied major duties between July and September. What is more president Trump warned that unless China makes major concessions even more punitive tariffs will come into effect  at the beginning of 2019. However, this deadline has been postponed at the G20 meeting by 2 months and a present series of trade talks should decide whether this threat will materialize or will be replaced by a trade deal that  markets hope for.

What will be decided now?

So far China has offered purchases of more US energy and agricultural products but the US delegation wants to see much more. The US wants not only assurances of IP protection and equal treatment of the US companies but also mechanism to verify any agreement. This will not be easy and at present it is unclear how such deal could be structured. Unless the US side sees a major progress in negotiations, president Trump could deliver on his tariff threats. Why is that important?

Let’s crunch some numbers. At present there are 25% tariffs on some $50b (annually) of the Chinese imports and 10% on another $200b. Last year Bloomberg estimated that those take away 0.5pp from the growth in China. If the US hikes the lower tariff to 25%, the impact could increase to 0.9pp. and if a remainder of the Chinese imports is “taxed” at 25%, the impact would grow to a massive 1.5pp. These are just estimates but there will be far reaching consequences. US companies getting revenues from China could suffer like Apple that has already issued a warning and import prices in the US would increase. Moreover, there would be a spillover on China’s trading partners like Germany where industry is already at a risk of recession.

The trade conflict is obviously of great interest for stock markets and the US500 has recovered greatly this year on the back of hopes for a deal. The trend on US500 has been very consistent as of late and the index has already erased some 70% of the losses from late 2018. A major resistance can be spotted at 2818 points while supports are scattered between 2600 and 2680 points. Source: xStation5 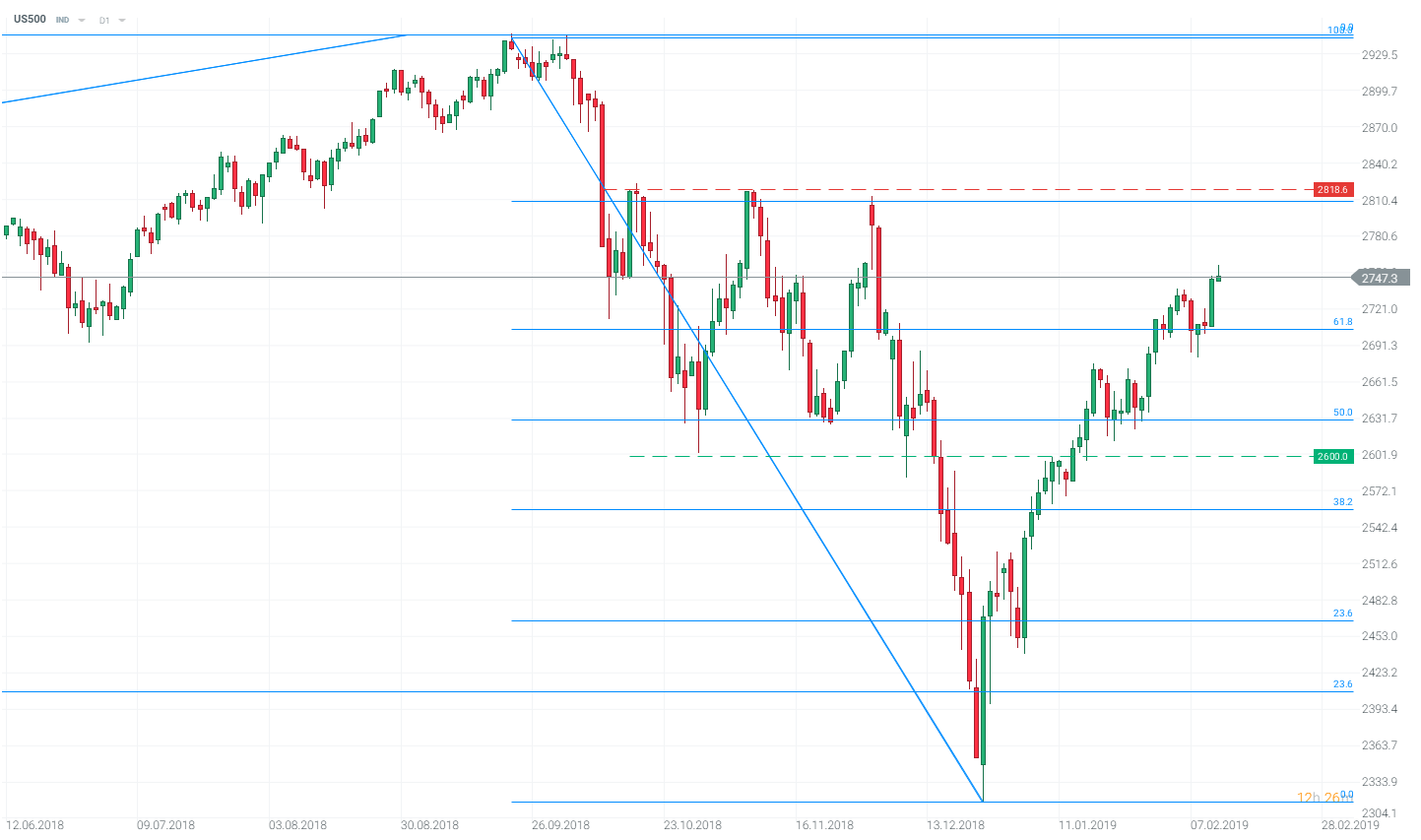 China is the key trading partner for Australia so any significant economic downturn would affect the Australian economy. The Reserve Bank of Australia could react by lowering interest rates and that is obviously important for the currency. The Australian dollar had a tremendous January but it lost its appeal in February. It is still unclear if the recent recovery could lead to a change of trend or is it just the ABC correction. Source: xStation5 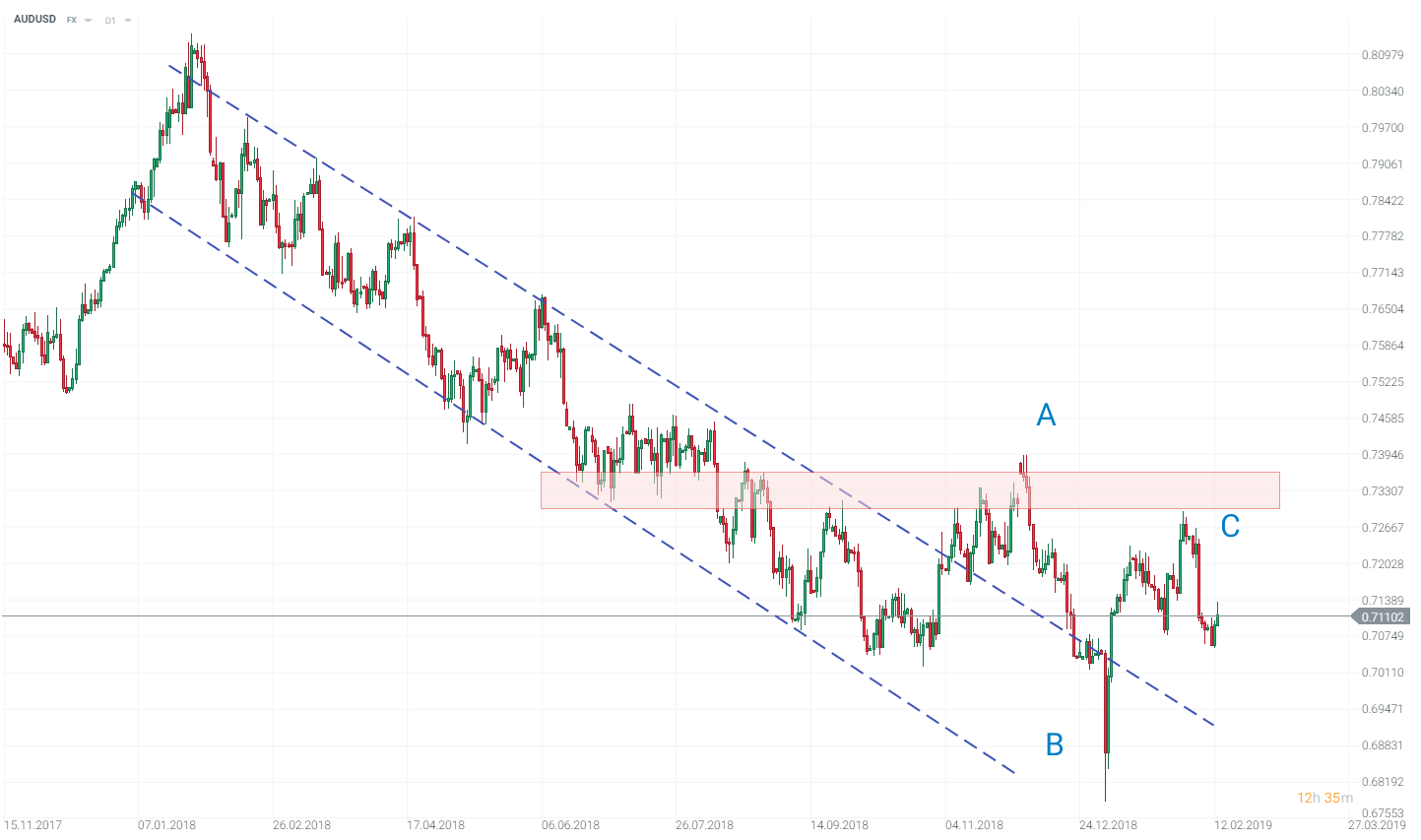 Soybean is one of the “trading chips” in the conflict because China needs to import a lot of this commodity and directed their purchases from US to Brazil last year. Traders hope that ay trade deal would include actual purchases of the commodity from the US. Soybean prices have been rising steadily on these hopes and are close to the upper limit of a triangle pattern of 945c. Source: xStation5 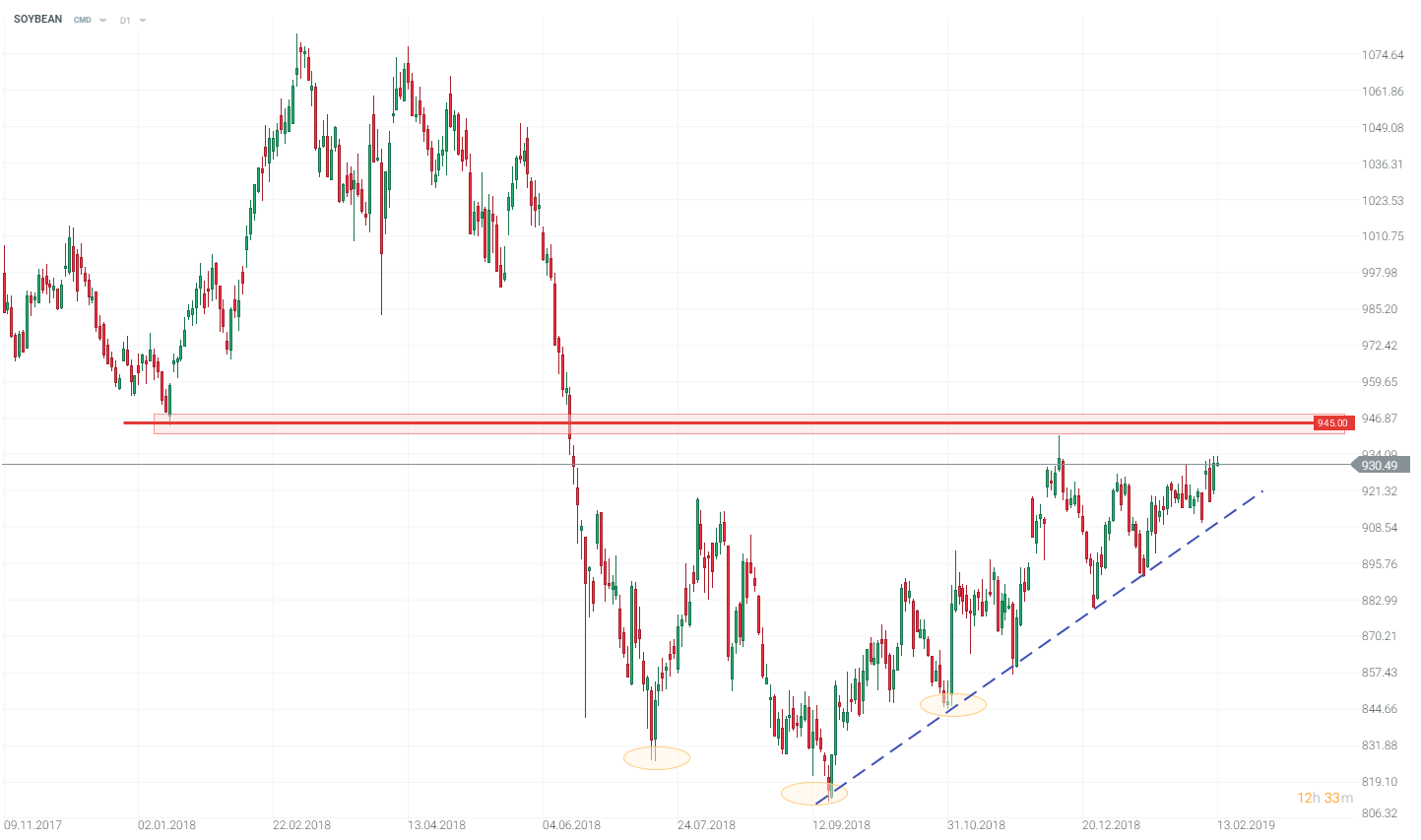