For the majority of equity market, year 2019 was very strong despite generally weak global economy, and 2020 has seen a continuation of this pattern. Despite the obvious risk from Coronavirus, the US tech market (US100) was more than 10% up at one point in February. However, the mood has soured recently amid virus spread beyond China. Could this be a game changer for the markets? Is it possible that the virus kills a decade long bull market on Wall Street?

While we are still waiting for hard data from China, there’s increasingly more evidence about the scale of “destruction” that we witness - and it’s massive. We are seeing declines between 30 and 95% annually on a range of activities. Oil run rate, the most broad-based indicator of the business activity one can possibly imagine, is currently nearly 30% lower compared to its 2019 average and more than 35% lower compared to December, as refineries operate below 50% of their capacities.

Consumer related statistics are actually even more dire. Car sales in the first half of February were 92% lower compared to a corresponding period of 2019. Smartphone sales was down 36.6% y/y in January and anecdotal evidence suggests a steeper decline in January. In a period between 25 January (when broad based protective measures were introduced) and 18 February, railway and subway traffic was down 82% y/y and Adidas sales (a proxy for brand cloth wear) was down 85% y/y.

Let’s take a look at food deliveries next. You China, a fast food chain, has 30% of of its location closed and sales in those that are open is down 50%. That makes a drop in revenue of around 65%. If this continues to go on for a month (and we are not far from that), we’d need to subtract about a half (around 4 percentage points) of a month of the annual GDP. Indeed, according to Global Times, 6% of the Chinese firms face bankruptcy and 60% of small and medium enterprises has cash for up to 2 months before they are unable to cover their fixed costs. So, how is it possible that official forecasts still see growth in China this year above 5%?! Well, the assumption was that the virus would be contained and everything would rebound in a V-style fashion... 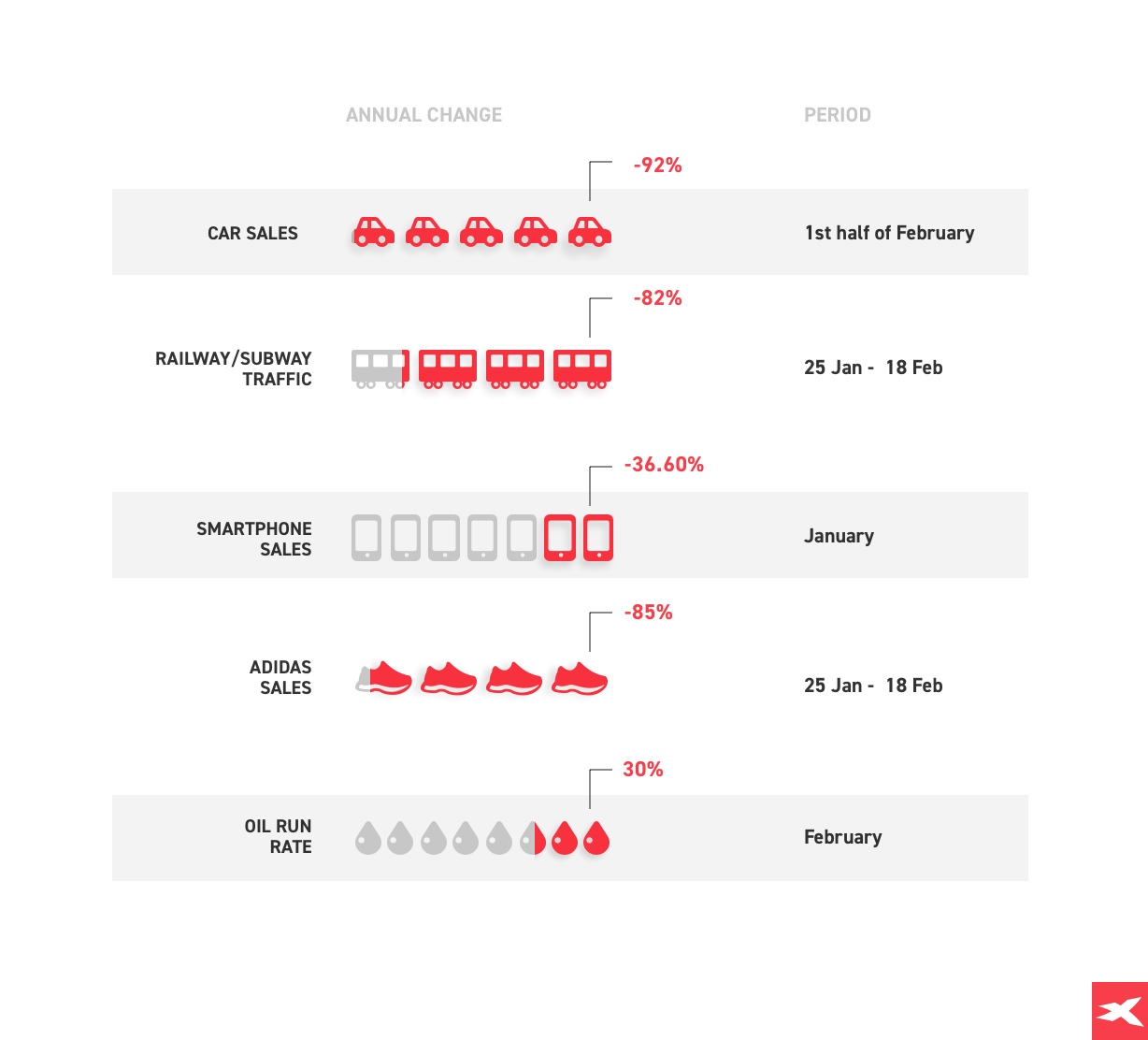 ...this is precisely the reason why even a mild outbreak in South Korea and Italy is causing such panic. Any losses in China could be partly covered with the help of global demand. But if these Chinese-style freezes and limitations were to be introduced elsewhere, we could very quickly see the global economy stopping. The last time this happened, albeit due to different reasons, the S&P500 sunk to 666 points. The scare is real - if Europe and far Asia have to employ longer lasting limitations, global recession could become a very realistic scenario.

Which is why new cases outside of China is the most tracked statistics at the moment. For quite a while, this number was moderate and to some extent explained by odd situations like new cases on the cruise ship. The number of countries recording the cases was up to 7. Over the weekend, however, the number more than tripled and keeps accelerating, as new cases were recorded in 14 ex-China countries on Monday, and in 16 on Tuesday.

The evidence that we presented in the first paragraph gives us a sense of the economic damage that’s been done. This picture will be more complete once the economic reports covering the virus-infected periods is published. Over the weekend, we will get first PMIs from China plus trade data from Korea. Given limited trust in the Chinese data, Korean trade and PMI reports could be the best view that we are going to get on the economic situation. Korean data will not reflect the recent local outburst (as it’s happened only recently), but should capture the impact of the Chinese problems.

How deep could the correction be?

The key question is, are we are headed for a full blown correction, or just a standard sentiment adjustment? Analysing historical patterns, one might notice that S&P500 often saw corrections close to 19%. That would imply a move all the way back to 2750 points. On the other hand, most pullbacks since 2015 were in range between 250 and 350 points. We are already at this minimum target with a possibility of a slide to 3050 points. Because the market is using ex-China contagion as a proxy of future economic damage, the data we presented in this paragraph could decide between those two scenarios. 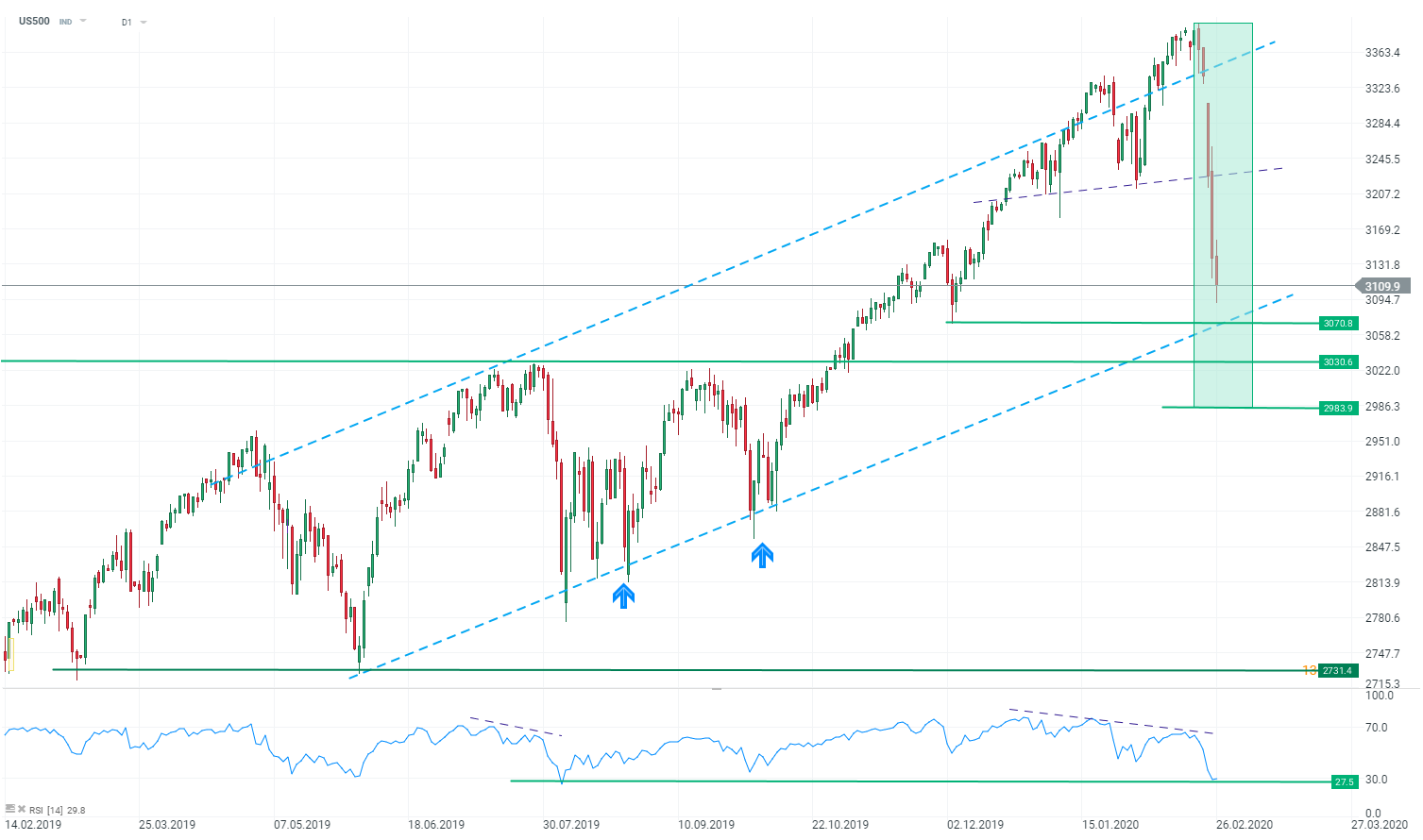 Looking at the US500 chart, we see three support levels. The nearest one is at 3070 points - local low from early December and at the same time lower limit of the upwards channel. Then there is 3030, a double top from the second half of 2019 and then 2984 points - 1:1 range of the early 2018 correction. If these supports do not work, we could be looking for a full blown correction with a support at 2730 points. Source: xStation