Stock of the week: BB&T Corp

While in Europe the potential Deutsche Bank tie-up with Commerzbank is drawing the most of attention when it comes to deals conducted in the banking sector, a bombshell merger was announced in the United States. BB&T Corp will merge with SunTrust Banks in the biggest banking sector merger since the financial crisis. In this report we will take a look at the background of the deal, benefits and costs coming with it as well as how new entity would fare at the time of regulatory changes.

SunTrust Banks and BB&T Corp currently rank 11th and 12th among the US banks in terms of domestic assets. However, after the merger the combined entity will rank 6th being just $26 billion smaller than 5th bank - US Bank, subsidiary of Bancorp. Source: Bloomberg, XTB Research

The deal was announced in a statement dated on 7 February 2019. BB&T Corp and SunTrust Banks will merge into one entity in a so-called merger of equals worth around $66 billion. While companies claim that it is a merger of equals it is not entirely true as BB&T shareholders will control 57% of the combined entity while SunTrust’s owners will keep the remaining part. SunTrust shareholders will receive 1.295 BB&T shares for each SunTrust share they own. It should be noted that similarities between two lenders are striking. Both are considered regional banks and both have similar level of assets (BB&T - $225 billion, SunTrust - $216 billion). In turn, newly formed entity will be the sixth largest US bank by domestic assets, being surpassed only by commercial divisions of JPMorgan, Bank of America, Wells Fargo, Citigroup and Bancorp. The combined entity will be granted a brand new name and will be headquarter in Charlotte, North Carolina. This is also quite an extraordinary development as neither of the two companies is being headquartered there at the moment. The decision on location was not random either and is part of a broader strategy. Positions on the Board of Directors will be evenly split between executives of the two companies with Kelly King, Chairman and CEO of BB&T, will serve as Chairman and CEO of new company until September 2021 when William Rogers Junior, Chairman and CEO of SunTrust Banks, will take over. 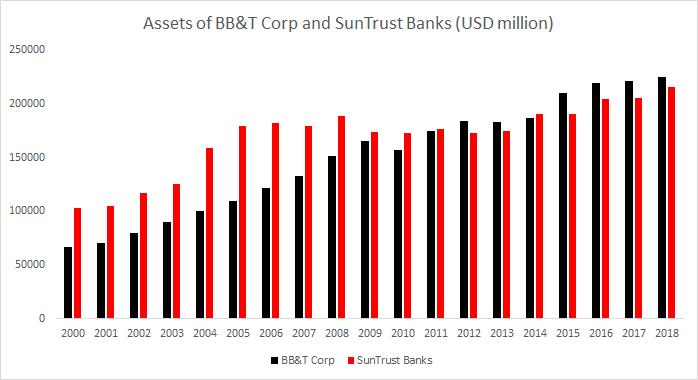 BB&T Corp and SunTrust Banks managed to significantly boost their assets when compared to the turn of millennia with asset CAGR at, respectively, 7.02% and 4.16%. It should be stressed that the financial crisis had almost no impact at the level of BB&T Corp assets. Source: XTB Research, Bloomberg

A tie-up comes with significant cost synergies. In a joint statement companies said that they expect the merger to generate $1.6 billion of net cost synergies annually by 2022. Savings should come primarily from overlapping costs in facilities, IT systems and retail banking. This is especially true for facilities as around a quarter of all branches operated by BB&T and SunTrust are within two miles of each other. While widespread presence helped both regional banks grow significantly, after tie-up such abundance of retail outlets will no longer be required. Nevertheless, executives of both companies stay committed to previous strategy of keeping close ties with local communities - a move that helps regional banks build positive image among its customers. Earlier we have mentioned that the location of combined entity’s headquarters is not a random one. BB&T and SunTrust know that IT development is likely to drive the future of the banking sector. Charlotte is the home to a range of colleges and university that may provide banks with young talents. This may be even more important now as more and more studies show that the banking talentpool in the United States is shrinking. Last but not least, as businesses of BB&T Corp and SunTrust complement each other in various areas, new entity would be able to leverage its IT investments thanks to scaling down spending in overlapping segments and getting boost from internal synergies. Estimations provided by lenders suggest that shareholders of both companies will benefit from double-digit EPS growth by 2021. The transaction is set to close in the final quarter of 2019 and is still subject to regulator and shareholders’ approvals.

While the level of BB&T assets barely changed during the financial crisis, the Bank experienced a significant drop in earnings. However, unlike SunTrust Banks, it managed to avoid even a single year of losses during the past two decades. Source: Bloomberg, XTB Research

However, one cannot forget that everything comes at a price. And this price for BB&T and SunTrust is risk coming along with an attempt to form a brand new major bank - brand risk. As new entity will be granted a new name its recognition among customers will initially be minor. Moreover, closing a portion of retail branches may cause some current clients to feel isolated and in turn they may switch provider of banking services, for example to the one with branches closer to their home. Having said that, making this new brand recognized in the US should be top priority for management. Lack of recognition would lead to lacklustre client growth and this could be a significant hurdle to growth over the longer time horizon. As regulatory changes are slowly reshaping the US banking sector the number of big banks is likely to grow in the years to come.

Both BB&T Corp and SunTrust Banks seem to fare better than most of its peers when we take a look at the financial ratios depicted in a table above. BB&T and SunTrust have better than average returns and margins while their earnings are priced in line with average for the whole peer group. Source: Bloomberg, XTB Research

BB&T Corp merger with SunTrust Banks was announced at times of significant regulatory changes to the US banking sector. Congress passed a bill last year that eased some regulations imposed on lenders by the Dodd-Frank act. Under new law only banks with assets exceeding $250 billion would be classified as systemically important. Earlier that threshold was set at $50 billion. Companies that fall into this category have to conduct time and money consuming stress tests. In case the merger was not happening right now neither of the two banks would be classified as systemically important and in turn neither would be required to conduct stress tests. However, given current levels of assets held by two banks and recent asset growth rates, both lenders would surpass the $250 billion threshold in 2022 or 2023. As it will take at least a year before Dodd-Frank act revision takes effect and until then both banks would have to conduct stress tests anyway, potential savings from delaying merger and taking advantage from not conducting those few stress tests would not offset synergies coming along with the tie-up. Nevertheless, as new regulations make it easier for small lenders to grow, it is likely that we will see more M&A deals in the US banking sector in the quarters to come. Taking an advantage of merging before others may help BB&T and SunTrust attract interest to their new brand and help them get foothold in the sector that is likely to see some consolidation in the nearby future.

BB&T Corp (BBT.US) was underperforming throughout 2018 - stock declined almost 13.3%. However, price surged around 15% since the beginning of the year. The stock failed to break above the downward sloping trendline in the previous week and is now trading a notch above the support level at $49.65. Source: xStation5