Stock of the week: Chubb Limited

Summary:
- Chubb Limited (CB.US) is one of the world’s biggest P&C insurers
- Company seems to outperform rivals in efficiency of asset management
- The lowest combined ratio and the highest share of premiums in revenue
- Another year of record-breaking investment unit performance
- Big stake in the first Sino-foreign financial services company
- Moving averages may paint a golden cross pattern

Investing is basically a game of seeking the most attractive risk-return trade-off. Generating big returns was always high on investors’ priority list but importance of managing and mitigating risk grew significantly over the past decades. While everyone seems to be doing their best to transfer risk away there is a group of entities that makes living out of buying and pooling risk - insurers. In this article we will take a closer look at operations of Chubb Limited, one of the world’s biggest property and casualty insurers, as well as how it stands among its rivals. 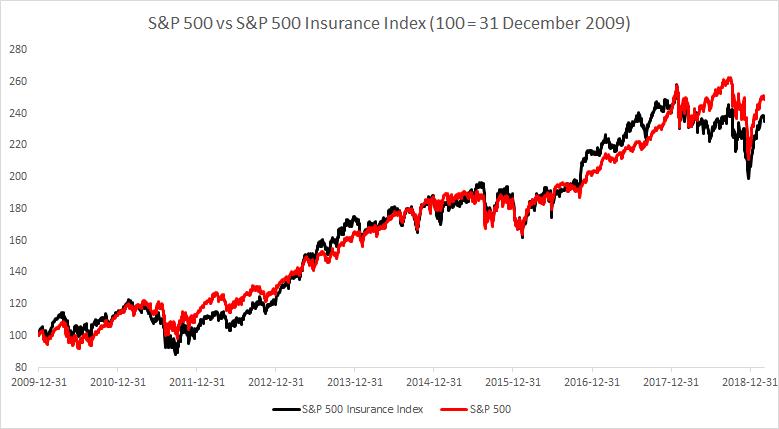 S&P 500 index and S&P 500 Insurance index were moving in tandem for the major part of the past decade. However, two benchmarks diverged following 2016 US presidential election. Insurers outperformed broad market during the first year and a half of the so-called “Trump bump”. Performance of the US insurers lagged the one of the broad market during 12 months following stock market turmoil from the turn of January and February 2018. Source: Bloomberg, XTB Research

2018 was a sweet year for insurers, especially from the United States. Robust economic growth and tight labour market increased demand for their services as well as boosted value of their investments. Moreover, monetary tightening conducted by Fed throughout much of 2018 supported returns of the fixed income investments. Finally, first half of the previous year was marked by relatively small value of catastrophe losses that allowed insurers to book higher underwriting profit. Such a development helped whole industry present solid full-year figures as calm first half of the year managed to offset losses resulting from Florence and Michael hurricanes in the second half. However, the very same factors that helped make 2018 a good year pose a threat of making 2019 a challenging one. Fed paused rate hike cycle and tight labour market may eventually turn to be drag as the US insurance sector unemployment rate of just 1.9% in January 2019 will make attracting young talents even harder and more expensive. However, these factors are likely to have broad impact on the whole industry rather than particular companies.

Before we move to more in-depth analysis of Chubb Limited operations let’s provide some background by comparing the US insurer to its main peers. Taking a look at the table above one can see that Chubb outperforms peer group in terms of asset management as pictured by above-average RoA. However, the US insurer trails major competitors when it comes to generating return from equity. This can be explained by significantly lower financial leverage of Chubb as the company was the least indebted one in the group at the end of 2018. Liquidity position of Chubb also looks promising as the company has over twice as much cash as it would need to repay the short-term portion of debt. In this category Chubb bows only to Zurich Insurance Group. Market values Chubb’s earnings more or less in line with peer group average and median. Finally, let’s address composition of revenue. Insurance companies have two main sources of revenue: premiums and investment income. As one can see in the table above out of all companies, Chubb was the one generating the biggest share of revenue from premiums in 2018. The US insurer was also the one with the lowest combined ratio but what does it exactly mean? 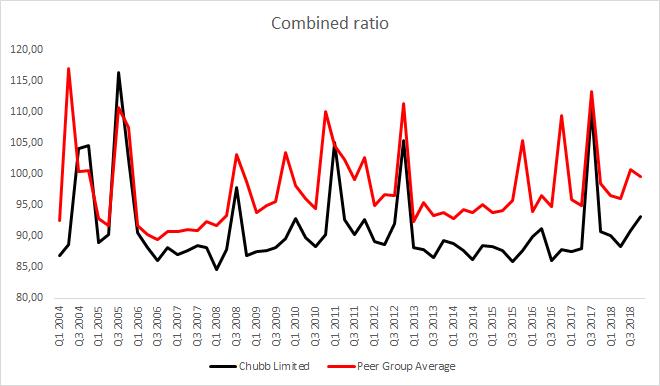 Combined ratio is probably the most important financial ratio when analyzing insurance companies. It is a sum of expense ratio and loss ratio. The former is a quotient of company’s expenses and earned premiums while the latter portraits value of incurred losses (claims) as percentage of earned premiums. Summing up, combined ratio shows what percentage of earned premiums the insurer either paid out as claims or expensed in a given period. Having said that, a combined ratio below 100 means that the company made profit on underwriting business in a period. In the previous paragraph we highlighted that Chubb Limited had the lowest combined ratio among its rivals in 2018. In fact, the company outperformed for the major part of the past 15 years as its combined ratio surpassed peer group average in just 4 quarters during that period. Earlier mentioned high share of premiums in Chubb’s total revenue can be seen as both positive and negative factor. On one hand, it shows that Chubb can rely on its core business as it should be enough to warrant company operating as a going concern. For example, investment income usually accounts for more than 20% of Allianz revenue therefore the German insurer may begin to struggle once market conditions change and yield of its portfolio declines. On the other hand, one may argue that high share of premiums in Chubb’s revenue may indicate the company investment unit underperforms. However, this does not seem to be that case this time as Chubb’s investment income was at record high of $3.24 billion in 2018, marking the third consecutive year of record-beating investment performance. 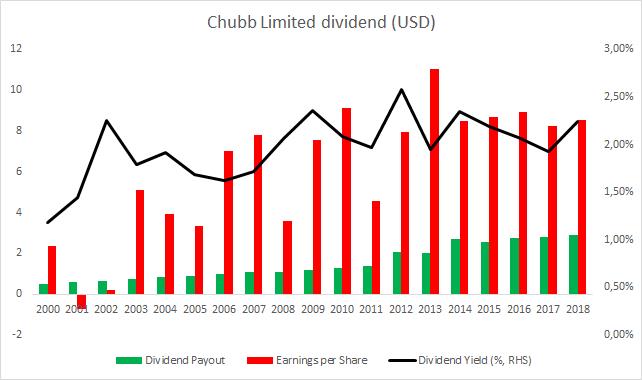 Chubb Limited is sharing profits with shareholders on a regular basis. The company has a solid dividend policy and tries to increase dividend payout each year. While dividend yield may seem low, note that earnings are significantly higher than dividends providing company with a margin of safety in case it is to experience a deterioration in business. Source: Bloomberg, XTB Research

As we have mentioned earlier changing economic landscape may turn to be hurdle for the whole insurance industry. However, there are a few ways insurers can take in order to continue growing. One of such ways is of course expanding into new markets. This is the field where Chubb may shine in the years to come. Like some other insurers, Chubb is conducting business in China via joint venture entities which in case of Chubb is Huatai Insurance Group. However, just recently the Chinese insurance watchdog gave the US insurer green light to boost stake in Huatai from 20% to 26.2%. In turn, Huatai became the first Sino-foreign financial services holding. Chubb’s executives already announced that this is not the end of expansion and they will be looking to boost stake further with an ultimate goal of reaching majority and taking control over Huatai Insurance Group. When it happens and whether it happens will depend on Chinese authorities but for now Chubb will benefit from getting higher portion of Huatai profits. As China is world’s second biggest insurance market and is becoming more and more open for foreign companies so Chubb’s rivals are likely to look for ways to boost their presence in the country as well but at this point in time the US insurer seems to be ahead. Utilizing full potential of the Chinese market may take a while but Chubb Limited rewards long-term investors with solid dividend policy.

Chubb Limited (CB.US) never recovered from the turmoil that stormed global stocks markets at the beginning of 2018. The stock lagged subsequent recovery and its upward price moves during past 12-month were often limited by either 50- (green line) or 200-session moving average (purple line). Chubb managed to break above the latter hurdle in mid-January and has been trading near it since then. One may notice that 50-session average recently turned higher raising hopes of painting a golden cross - potential bullish signal (orange circle). Source: xStation5