When could there be a potential reversal of negative sentiment toward gaming, both domestically and globally? Will the "wind of change come from the east" in the form of Tencent, which is increasingly beginning to "stretch its elbows" in the European M&A market? What else might the Chinese giant have in store? Let's start from the beginning

A few words about Tencent

Tencent is a Chinese-established (headquartered in Shenzhen) multinational corporation whose business area is cutting-edge technology and the Internet, and is one of the largest of its kind in the world. More than 30% of the company's revenue comes from mobile games. Tencent is expanding its business not only through organic growth, but also through active M&A activity.

Tencent has been very active in the M&A market, acquiring more gaming entities. It owns 100% in Riot Games and Funcom, among others. Tencent's other strategic holdings include an 80% stake in Supercell, 40% in Epic Games and, as has been widely reported in the Polish gaming market, 22% in Bloober Team. It has majority shares in studios such as Tequila Works, Klei Entertainment and Fatshark. However, it's not the deals related to the acquisition of the above holdings that are raising investors' hopes for the return of the gaming bull market. Last week, markets were hit by news reported via Reuters that Tencent was planning to buy a significant stake in French gaming giant Ubisoft, maker of such blockbuster games as the Assassin's Creed series. And while there is more speculation than fact surrounding this news, it has warmed the imagination of investors in both the global and Polish markets, who are hoping that Tencent will not stop in its expansionist zeal and will look favorably on companies that have fallen out of favor with investors, such as CD Projekt, Ten Square Games and Huuuge. It seems, however, that this sustained and significant reversal of the dire sentiment in the gaming market needs something much bigger than a lavish acquisition - a lavish but qualitatively and sales-successful AAA game launch. And that, at least so far, doesn't seem to be happening.

Subsequent investment forums and stock market articles outdo each other in speculation about the potential price Tencent could offer for Ubisoft's shares in the event of a significant stake purchase. There is even talk of €100 per share (vs. €46 currently), but these are, for the time being, only speculations. However, even these were enough to make Ubisoft's share price rise more than 20% at the extreme on the day Tencent's plans were announced. It seems that investors, at least for the time being, have no choice but to follow the old rule of "buy the rumor and sell the fact," because at least for now, to paraphrase a classic, "we have plenty of rumors." 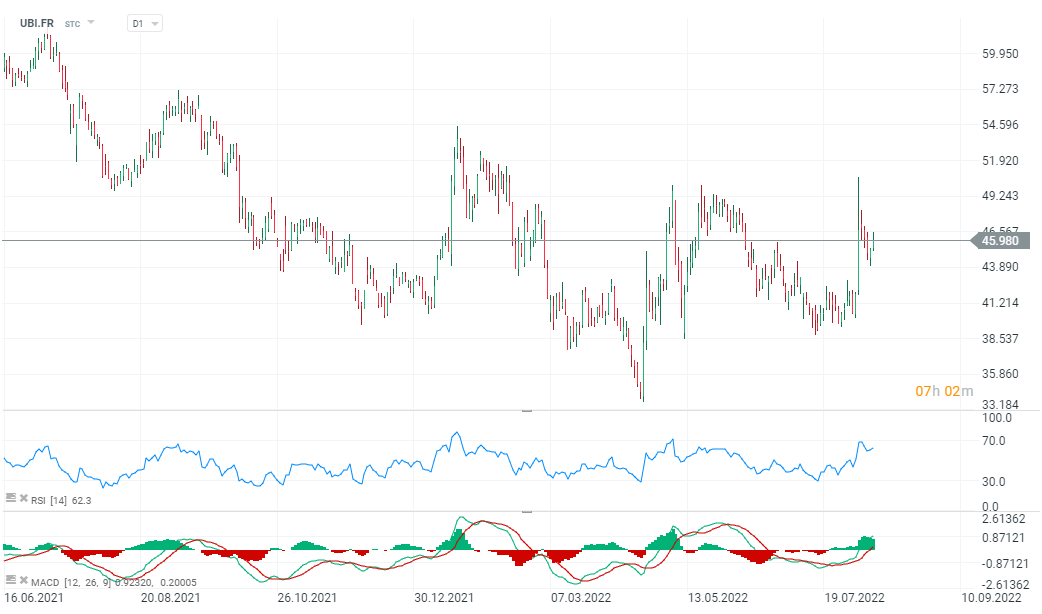