Stock of the week: Tilray

Summary:
- Tilray (TLRY.US) is one of the biggest Canadian cannabis companies
- The company exports cannabis to Germany, Australia and New Zealand
- Acquisition in early-2019 allowed company to double production capacity
- Legalization of cannabis edibles in Canada may provide additional source of revenue
- Stock jumped above the downward sloping trendline at the beginning of the week

The initial hype that surrounded Canadian cannabis stocks is long gone but it does not mean that cannabis stocks are any less interesting now. The industry is still young and faces bright prospects ahead. In this analysis we will take a look at one of the biggest public cannabis companies - Tilray (TLRY.US).

Tilray is the Canadian cannabis company that was established in 2013. The company began as medical marijuana producer and distributor but has expanded into recreational cannabis following legalization in Canada. The company can be seen as a kind of a pioneer among cannabis firms due to its numerous “firsts”. For example, Tilray is the first cannabis producer to be awarded Good Manufacturing Practice certificate, the first to get listed on the major US stock exchange and also the first to legally send cannabis through the US-Canada border.

Tilray is also taking the opportunity of the fact that cannabis is still illegal in most countries of the world. How the company does that? By exporting its products to countries that do not have their own production facilities. Among such countries one can name Germany, Australia or New Zealand. Moreover, Tilray has also been sending its products to the US for research purposes. Last but not least, the company entered into an agreement with a subsidiary of Novartis (NOVN.CH), the Swiss pharmaceutical company, at the end of 2018. Under the terms of the deal, Tilray will supply non-smokable medical cannabis products to Novartis’ subsidiary, which will market them on the legal markets globally. 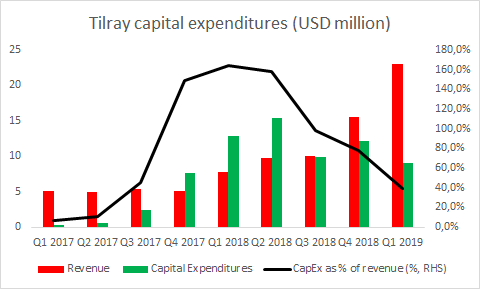 Tilray has been investing extensively over the past two years with capital expenditures exceeding sales in the first half of 2018. However, ratio of CapEx to sales shrank got back to more “reasonable” range in Q4 2018 and Q1 201 as company’s sales surged following recreational cannabis legalization. Source: Bloomberg, XTB Research

A point to note about the Canadian cannabis industry is the fact that it faces constant shortage of the product. Demand for recreational cannabis is higher than for the prescription-only medical cannabis and the product itself is different. Having said that, adjusting greenhouses and production scale to recreational demands should be a matter of time. In fact, Tilray acquired Natura Naturals Holdings in early-2019 and effectively doubled its cultivation ability. Another hurdle that limited expansion of the Canadian cannabis sector is small number of retail stores. However, as the time passes more licenses should be granted and this hurdle should be out of the way as well. Increased cannabis supply and bigger number of retail stores should allow Canadian cannabis producers, including Tilray, to fully exploit demand for cannabis within the Canadian economy. 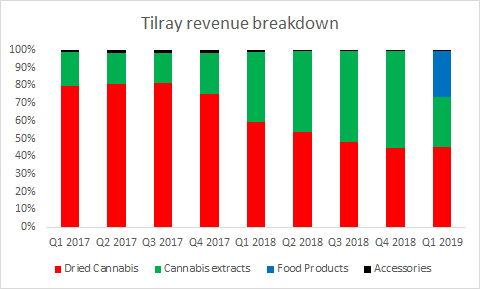 Tilray’s sales were dominated by dried cannabis in 2017 but the situation began to change later on as cannabis extracts gained importance. Food Products segment relates to non-psychoactive cannabis food products that Tilray began to market at the start of 2019. Source: Bloomberg, XTB Research

Canada may seem liberal when it comes to recreational cannabis but the truth is that it has not yet allowed sale of all types of recreational cannabis products. Edibles, or cannabis-infused food and drinks, are a type of such products. They have a wide appeal across cannabis consumers in the Netherlands or the United States as they allow to enjoy recreational side of the product without the need of inhaling toxic smoke. Canada is said to make necessary changes to its cannabis law by mid-October in order to allow the legal sale of cannabis edibles in Canada, a move that will create a new sub-sector within the cannabis sector. While this is an opportunity for all Canadian cannabis producers to increase their revenues, Tilray may be among leaders as it is already experimenting with edibles. The company entered into agreement with AbInBev (ABI.BE and ABI.US) in 2018 to research non-alcohol THC- and CBD-infused beverages.

Tilray (TLRY.US) share price has been under pressure this year as the market was cooling off after late-2018 cannabis hype. The stock took a major jump higher on Monday when the private equity firm that owns over 70% of the Tilray’s outstanding shares outlined a plan for an orderly release of those shares. The stock found itself above the downward sloping trendline that navigated price since the beginning of March 2019. Source: xStation5