United Parcel Service (UPS.US), one of the largest delivery companies in the United States, enjoyed a few days of strong gains recently. Earnings report for the second quarter of 2019 was the main driver of the rally as it showed company performing well in uncertain global environment. In this short analysis we will take a look at the quarterly report as well as details of UPS’ transformation process. 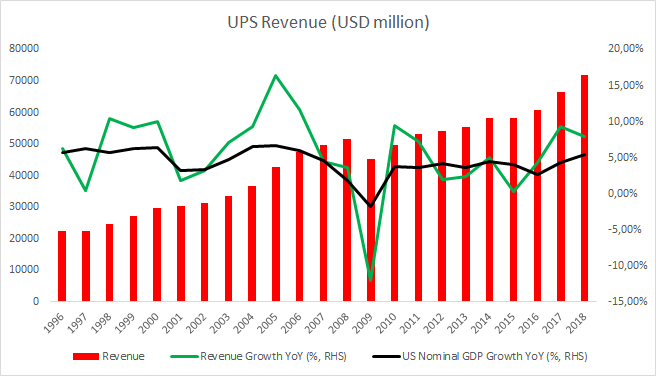 Taking a look at the past twenty or so years, one can see that UPS suffered only one annual decline in sales - during the global financial crisis. However, it should be noted that in the majority of years presented on the chart above, UPS’ revenue growth exceeded the growth of nominal GDP - a good sign for cyclical companies. Source: Bloomberg, XTB Research

United Parcel Service, or simply UPS, is a shipping company. Such companies are considered cyclical as shipping tends to decline along with a drop in the overall economic activity. Having said that, the ongoing US-China trade war threatens business of the UPS. Moreover, concerns mounted further when China targeted FedEx, another US delivery company, for its failure to deliver packages to China - a move that was said to be a retaliation for the Huawei ban. In turn, UPS stock trailed S&P 500 index for the major part of the year and just recently came ahead of the broad market index. Share price saw an over 15% gain between 23 and 26 of July in response to the earnings report release.

Earnings report for the second quarter of calendar 2019 eased investors concerns as it showed the company performed better-than-expected and saw higher sales and profits than a year earlier. The EBIT grew almost 21% YoY even in spite of the stronger US dollar than a year ago. Revenue reached $18.048 billion marking a 3.4% YoY increase. UPS saw higher operating profit in all three business segments (US Domestic, International and Supply Chain & Freight Performance) and recent quarter was the most profitable one in company’s 111-year long history. Company’s executives hail company-wide transformation process started recently as they claim it began to pay off. Let us recall that UPS plans 80% of its networks to “touch automation” by the end of 2019. 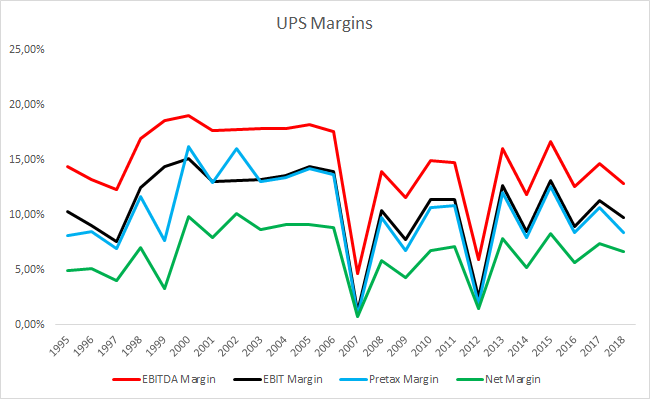 Margins of the UPS were quite volatile over the past two decades. Company’s margins have never fully recovered from the plunge in 2007. However, lowering operating costs and in turn boosting margins is one of the goals of the ongoing transformation process. Earnings reports for the first two quarters of 2019 showed that margins are indeed improving. Source: Bloomberg, XTB Research

Increased automation will allow the company to reduce operating costs but it is not the only goal of the transformation process. The company also wants to greatly increase its sorting and shipping capacity allowing it to additionally reduce costs through scale. To increase sorting capacity, UPS has opened three new sorting hubs in the United States. When it comes to increasing shipping capacity, the company plans to increase fleet of its subsidiary, UPS Airlines, by 44 new aircrafts in 2017-2022 period with 11 new planes joining the fleet this year. To picture the scale of UPS operations let’s just say that UPS Airlines serves close to 780 destinations, the most out of all cargo or passenger airlines in the world.

Of course, one could argue that increasing capacity while the global economy shows signs of slowing is not a smart move. However, changing consumer trends may buoy UPS business even at times of the overall decline in the economic activity. Namely, e-commerce is growing more and more popular among customers. It is hard to imagine people shopping online if they did not have the option to have their products delivered to them. In fact, without delivery services e-commerce would have a hard time growing popular. It is true that some of the major retailers, like for example Amazon, are trying to set up their own shipping networks but it is rather costly move. In turn, a bulk of smaller, but still big, retailers prefer to outsource deliveries to specialized companies, like UPS. Just recently UPS added CVS Pharmacy, the largest pharmacy chain in the US, to its Access Point programme that offers access to over 78 thousand of remote pick-up/drop-off points across the United States. 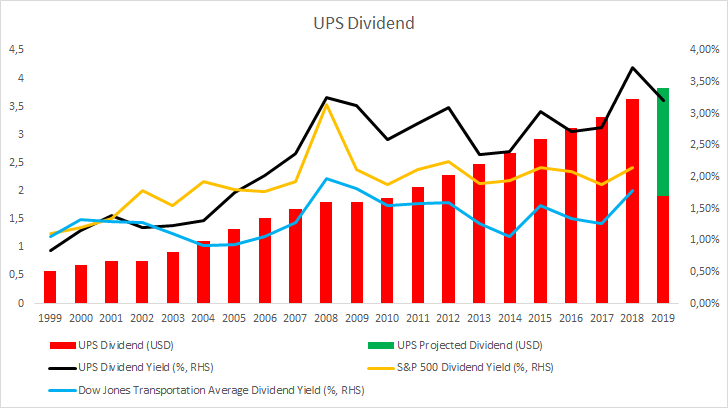 UPS may not be the best dividend pick as the company does not hesitate to freeze dividend hikes at the times of struggle as it was the case in the aftermath of the dot-com bubble burst or the global financial crisis. However, the company is reluctant to reduce dividend and for the major part of the past decade it had higher dividend yield than the two broad market indices it is a part of. Source: Bloomberg, XTB Research

Having the above in mind, continued shift from traditional shopping methods to online shopping could help mitigate some of the negative impact of the potential economic slowdown for the United Parcel Services and other delivery companies. However, short-term price swings may occur anyway, especially on trade-related headlines. Nevertheless, even after recent surge, UPS stock offers a dividend yield that may help investors look past short-term price swings as it is higher than the yield for the two relatable stock market indices - S&P 500 and Dow Jones Transportation Average. The US delivery company paid out two quarterly dividends of $0.96 this year and projects two more of the same size to come in the second half of the year for an annual dividend of $3.84. This would mark around 5.5% increase against 2018 meaning that dividend is growing not only in nominal but also in real terms as the US inflation is over two times lower.

UPS (UPS.US) share price rose significantly in the previous week thanks to the superb earnings report published by the company. The stock broke above the mid-term resistance zone ranging $114-115 and, in turn, has left the trading range that kept it in check for over a year. The $125 handle can be viewed as the final resistance level ahead of the all-time high in the vicinity of $135 handle. Source: xStation5