Strong trade data from China, US pastor to appear in court today

The US equities added to previous losses yesterday experiencing another wave of selling. However, the scale of decline was about a half of what we saw the day before. On the other hand, shares pushed higher during the Asian trading with Chinese stocks shining. As turmoil eased somewhat the Japanese yen gave back some gains being the worst performing G10 currency at press time.

HSCEI (CHNComp) found itself on the lowest level since early-2017 in the aftermath of yesterday’s slump. The index recovered today and is trading a notch below the lower limit of the previous consolidation range. Source: xStation5

A recovery on the Chinese stock markets can be to some extent ascribed to the better-than-expected trade data from China. Chinese exports rebounded in September advancing 14.5% YoY in USD terms. This is a stellar outcome as a decline from prior 9.1% YoY (revised from 9.8% YoY) to 8.2% YoY was expected. Moreover, imports were forecasted to decline from 19.9% YoY (revised from 20% YoY) to 15.3% YoY while the actual data showed a decrease to 14.3% YoY (also in USD terms). In turn the Chinese trade surplus was $31.69 billion in September against a forecast of $19.2 billion. Taking a look solely on the China-US trade data one could saw that Chinese exports to US advanced 14% YoY while imports contracted 1.2% YoY in September. This was the first contraction since February. In turn the Chinese trade surplus with the US hit record high at $34.13 billion in September. One reason behind such a good data could be an incentive to front-load goods by importers before tariffs take full effect. In such scenario one could expect data to deteriorate next year. 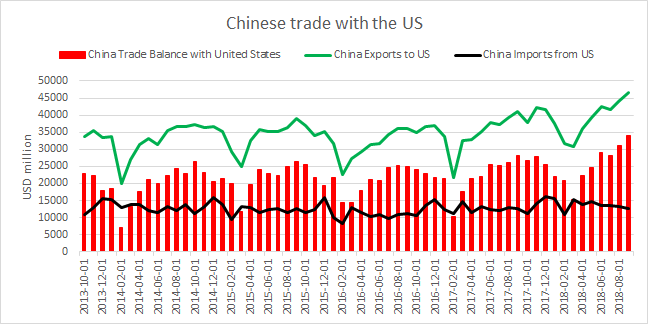 While the trade data may be used by the United States as an ammunition in the ongoing trade war some relaxing news concerning the topic spurred elsewhere. In the past weeks markets feared that the US administration may label China the currency manipulator and therefore stiffen rhetoric what could lead to the potential escalation of the conflict. As Bloomberg reported today the US Treasury Department advised Secretary Steven Mnuchin that China in fact is not doing so. Nevertheless, according to the Bloomberg report, China is likely to stay on the monitoring risk because of its significant trade surplus with the United States. Therefore now it is all up to Mnuchin to follow the advise of his Department’s staff or bow before pressures from the US President Donald Trump. The US semi-annual foreign exchange report is due next week.

USDTRY entered a downtrend after peaking in the vicinity of 7.1 in August. The pair found itself within the zone that served as a floor during the past two months. The ruling in the US pastor case will be crucial for the pair. Source: xStation5

Last but not least, TRY traders should keep on guard today as Andrew Brunson, the US pastor imprisoned in Turkey, will appear in court today. The Turkish President Recep Erdogan announced some time ago that when it comes to Brunson it is all up to the court now. Such an announcement was viewed as an attempt to soften tensions between the United States and Turkey. Erdogan was reluctant to releasing the US pastor before and that kind of remark could be viewed as a PR move. Why? Firstly, in case the pastor is released Erdogan may say that he did not concede to the US (bolstering his image of a tough guy) but the court’s will was to release the pastor. Secondly, he could use such ruling to show that the Turkish administration of justice is fully independent from government pressures. On the other hand, if Brunson is found guilty he could serve as much as 35 years in jail.