While the latest shifts in monetary policy from the US Federal Reserve have caused many headlines in the past month or so, the European Central Bank (ECB) has quietly slid under the radar despite it’s record Asset Purchase Programme (APP) terminating at the end of December. The dramatic slide in US stocks following the last Fed meeting highlighted once more how big an impact central bank policy can have on the markets, and the subsequent recovery we’ve seen for equities in recent weeks is due in no small part to an apparent dovish shift amongst the rate-setters in the US.

The EURUSD has been rangebound for quite some time now with an attempted break above 1.15 a couple weeks back met with a firm rebuttal. Price is now testing a rising trendline from the 2018 low of 1.1220. Source: xStation

The most recent ECB rate decision came just under a week before the momentous Fed one that sent markets tumbling, and was itself a fairly benign affair. To highlight the change in policy expectations in the US, when Draghi and the governing council last concluded an ECB policy meeting, the markets were pricing in two further Fed rate hikes in 2019, now they expect none. The Fed have been one, or arguably a couple, steps ahead of the ECB in their policy responses in recent years with the US both quicker to embark on QE and also far faster to the draw to begin hiking rates from record lows.

The Dax30 (DE30.cash on xStation) hit a 6-week high last week and currently trades above the key swing level of 11000. While price remains above there further upside is possible but a drop back below could be seen to mark an end to the recent rally. Source: xStation

Given that the ECB have now ended their own version of QE, the question naturally turns to how long it will be before they start hiking rates. With the overnight deposit rate still at -0.4% there remains a fair amount of scope for increases, but given the concerns surrounding global growth the market is currently giving less than a 50:50 chance that they hike at all this year. With President Draghi’s term set to end on 31st October 2019, there’s a fiar chance that the Italian will have gone through his entire 8-year tenure without presiding over a single interest rate hike.

Current market pricing implies a probability of 58% that the ECB fail to raise rates at all during this year. Source: Bloomberg

As you can see from the chart below, through a combination of the Fed, ECB and BoJ then world’s largest central banks have conducted a series of concerted quantitative easing programmes, which combined have flooded the markets with additional liquidity. Furthermore, this process has suppressed bond yields causing investors yearning for yield to enter the stock market in search of better returns which has in turn boosted valuations. Now that the taps are being essentially turned off, does this spell trouble for global stock markets?  One of our 7 disasters for 2019 revolved around monetary tightening and the adverse impact that this policy shift could have on stock markets. 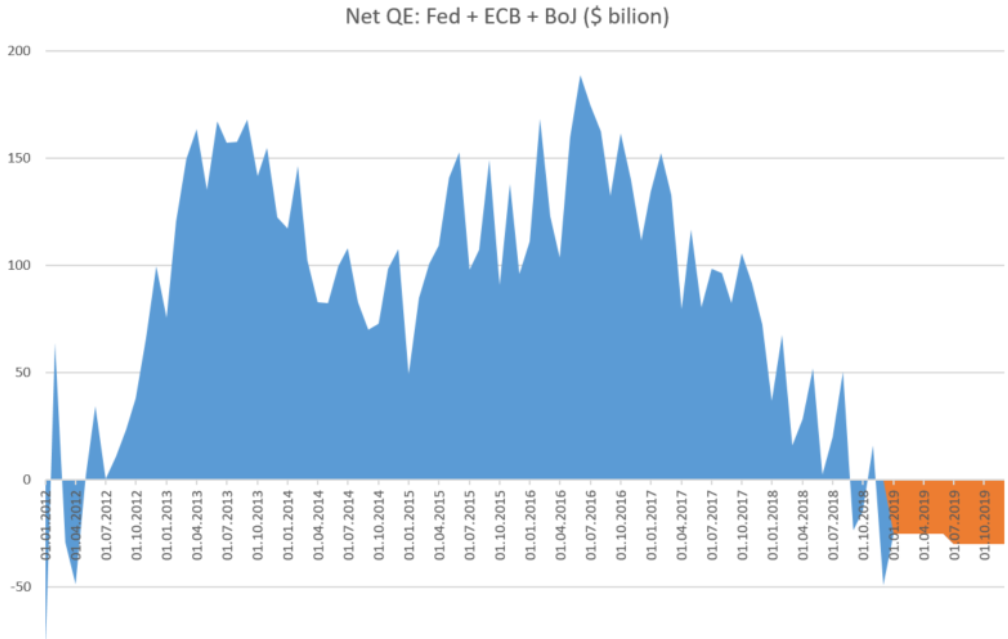 Combined asset purchases from the 3 largest central banks have dropped significantly in the past couple of years and have now turned net negative, with the Fed conducting quantitative tightening (QT). Source: XTB Macrobond

Majority of European indices finished today's session slightly higher,  thanks to solid performance of energy stocks, with DAX being an exception...

📉US100 retreats as Powell changed tone

Powell's initial comments sounded dovish as he reassured markets that the disinflationary process has begun, particularly in the goods sector, while...