Trump disappointed as China backslides on its promises

Trump hits out at China

On Thursday, US President Donald Trump accused China of backsliding on its promises to purchase more agricultural products from US farmers, a would-be deal reached between the two countries when they met on the sidelines of the G20 summit in Osaka, Japan. Let’s be frank, it was only a matter of time before Donald Trump hits out at China as the latter has yet to increase their US agricultural goods. Moreover, the data released by the US Department of Agriculture showed that China actually slowed these purchases from the US buying only 127 800 tons of US soybeans last week, down 79% compared to the previous week. The same concerns American pork whose China bought just 76 tons last week, compared to 10 400 tons purchases in June. In his tweet published yesterday Donald Trump lambasted China but praised Mexico writing that it “is doing great at the border”. Also on Thursday, Chinese Ministry of Commerce spokesman said that trade of agricultural products was an important issue that the two sides needed to talk about, however, he did not tell reports whether China agreed to buy more US agricultural products. Let us recall that officials from both China and the US held a phone call earlier this week, the first contact since the G20 summit in Japan. Nevertheless, this call focused on setting a date of a possible face-to-face meeting signalling that both sides are a long way off from any binding and long-standing agreement. 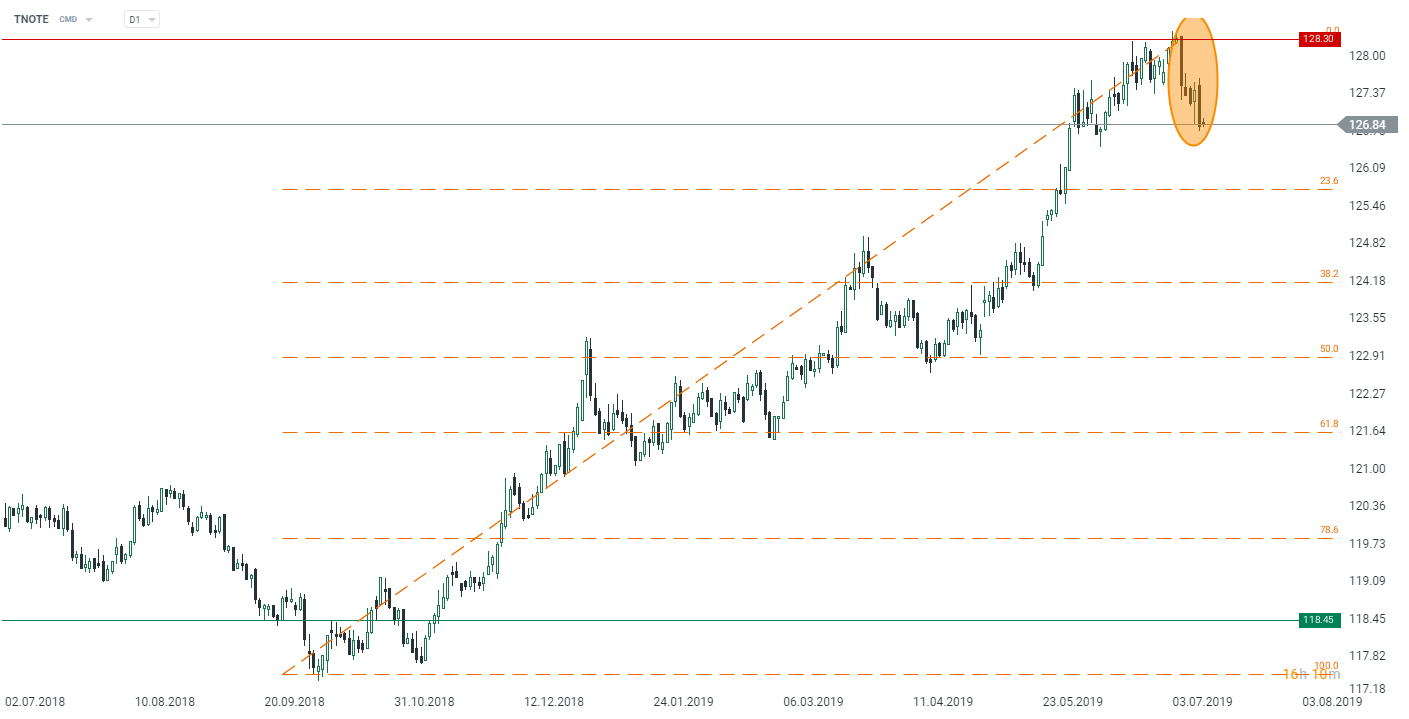 The US 10Y bond yield rallied on Thursday after the inflation report showed somewhat higher than forecast core price growth in June. It trades in the neighbourhood of 2.13% this morning and one may notice that a noticeable retreat has been made in the price since the latest employment report release. Source: xStation5

US President Donald Trump’s pressure for interest rate cuts has affected the Fed’s independence, according to the Chinese Global Times. It adds that it is highly unusual for the Federal Reserve to lower rates at a time when the economy has been growing quickly and unemployment is low. At the same time, it signals that upcoming rate reductions in the United States may prompt the PBoC to slash rates as well. On top of that, the report suggests that granting of more loans at lower rates to small and medium-sized enterprises is also on the cards. These revelations seem to be in line with the latest inflation data from China which increased deflationary concerns. As we noted earlier, despite higher meat and fruit prices the Chinese central bank is unlikely to cut rates as these are exogenous factors being out of control the PBoC.