An unexpected rise in UK retail spending during June has come as a welcome development for the pound with the currency looking to recover after hitting its lowest level in over 2 years against the US dollar yesterday.  A print of +1.0 M/M is well above the -0.3% consensus forecast and means that for 5 of the 6 months this year that the data has been released it has been better than expected. The resilience of the consumer in the face of ongoing political uncertainty is both surprising and admirable and suggests that despite heightened levels of uncertainty people are keeping calm and carrying on. What is more, the usual suspects behind a summer pick-up in consumer spending such as warm weather and sporting events have not really been felt in these numbers, with the England cricket team’s heroic performances likely to boost the next month’s release. 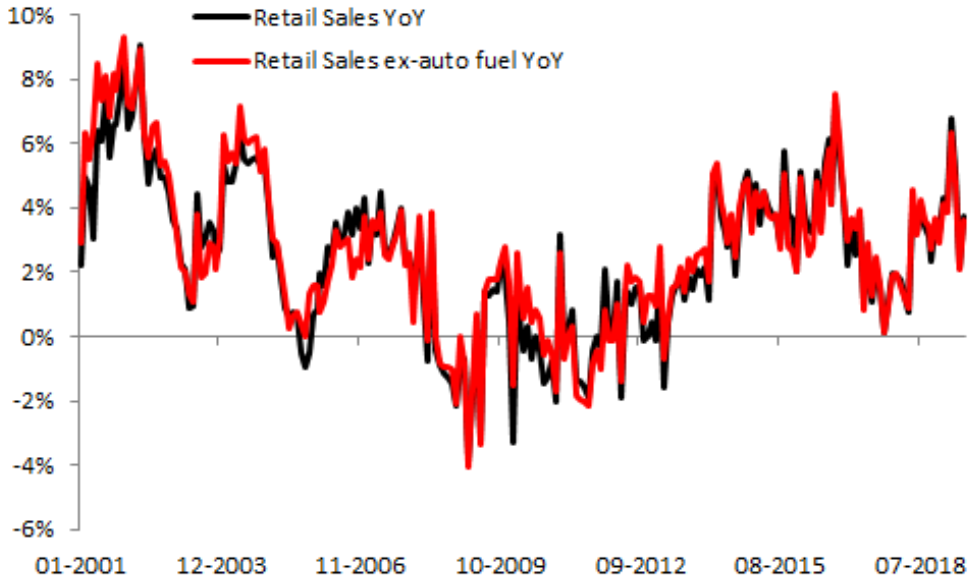 Retail sales in the UK have perked up in recent months despite the ongoing Brexit turmoil. Source: XTB Macrobond

FTSE slides back near 2-week low

Stocks in London have drifted lower this morning, with the FTSE back at the 7500 handle. The FTSE hit its highest level since last August just 2 weeks ago, but a bit of softness seems to be creeping back into the market. In general the lift that equities around the globe received from the positive trade news out of the G20 meeting at the end of last month has faded out, and traders are now back to focusing on growth prospects and to what degree central banks will provide monetary accommodation.

The FTSE is drifting back near recent lows around the 7480 level. The gap up from 7440 after the G20 meeting remains unfilled. Source: xStation