UK set for economic contraction despite monthly GDP recovery in May

The UK economy grew by 0.3% in May, in-line with the forecasts and ending a run of two consecutive monthly contractions. Even though the data represents a decent recovery from the sizable drop in April it will still take a near miracle for the UK economy to avoid falling into contraction territory in the second quarter, with an increase of 0.8% required in the month of June alone to avoid this fate. Considering the soft PMI readings already seen for last month this would represent a huge shock and as such it seems that the economy is set to post its first quarterly decline in almost 7 years when the data is released next month.

The pound is looking to recover from its recent lows but the GBP/USD rate will likely be more sensitive to developments across the pond in the near future. This afternoon with Fed chair Powell is set to testify on Capitol Hill in what is the most eagerly anticipated event of the week for markets. With investors currently pricing in a 100% probability that the US central bank will cut rates by the end of the month there’s plenty of scope for disappointment should Powell deliver a less dovish message and this would likely see a surge in the buck and heap more downside pressure on the GBP/USD rate.

The pound has gained since the release with the GBPUSD pair trading up to its highest level of the day. Source: xStation

At the same time as the GDP figures we also got the latest look at industrial and manufacturing production figures which extended their recent recovery in the month of May but both came in worse than expected. The manufacturing production year-on-year reading was flat at 0.0% versus a consensus forecast of +1.1%, up from -0.8% last time out. The industrial equivalent rose to +0.9% from -1.0%, but this was still below the +1.2% expected. 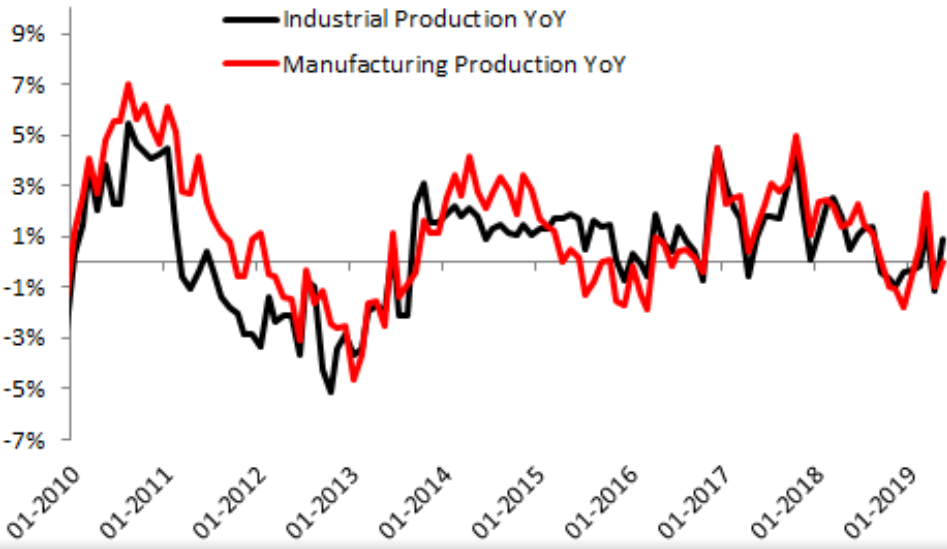 Both the industrial and manufacturing production extended their recovery in May, although the size of the increase was a little less than the consensus forecast. Source: XTB Macrobond

All in all the data could be seen as mildly positive, but due to its lagging nature and the fact that the aforementioned PMIs disappointed in June the overall picture for the UK economy remains mixed at best and any short term data pales into insignificance with Brexit still looming large overhead.