The latest employment figures have given mixed messages on the health of the UK labour market, with both jobless claims and wages rising. The main takeaway is the larger than expected rise in wages with the increase coming in at the fastest pace in over a decade. Given that inflation for the same month, as measured by the CPI, rose by 2.0% the figures represent a sizable increase in real wages for workers.

Looking at the data itself the average weekly earnings came in at +3.4% vs +3.1%  for the 3 month period (annualised) to May. The prior was revised a little higher to +3.2% from +3.1% beforehand. Weekly earnings excluding bonuses came in at +3.6% vs a consensus forecast of +3.5% and a prior reading of +3.4%. One less positive aspect of the release was the rise in jobless claims for June, which rose to 38.0k from 24.5k last time out - a figure itself which was revised up from 23.2k. 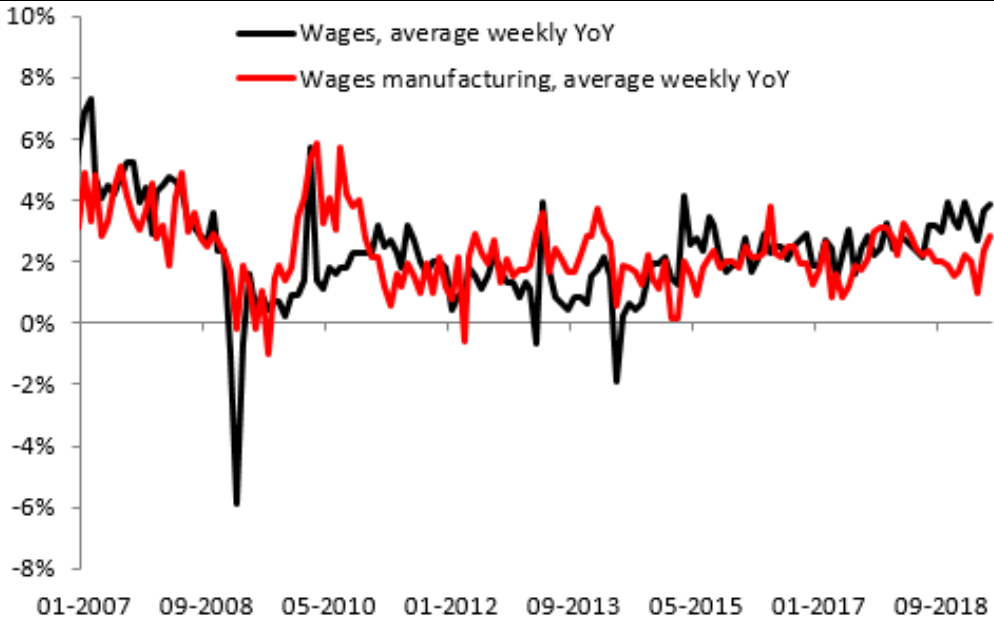 Wage growth in the UK has picked up of late, with the overall rise also supported by an increase in earnings for those working in the manufacturing sector. Source; XTB Macrobond

In terms of market reaction it’s been fairly muted after earlier the pound fell to a 6-month low against the Euro and sterling is not far from its weakest level of the year versus the US dollar. The currency has been in a persistent downtrend for the past couple of months with last week’s depreciation against the Euro making it 10 consecutive weekly declines and the longest such run on record! What is worth noting about the drop is the slow and steady nature of it, with no real sharp moves just a persistent move lower. This reflects the lack of any new obvious negative catalysts and more shows the continued headwinds to the currency due to the ongoing political uncertainty.

The EURGBP is on an unprecedented run higher, with last week’s gains making it 10 in a row - the longest run of advances on record. This morning price has broken above the 0.90 handle as the market hits a fresh 6-month high.  Source: xStation