The major stock market indices from Wall Street opened higher on Friday in a bid to recoup some of the losses from the beginning of the week. S&P 500 index climbed back above the 3000 pts handle being supported by solid earnings of the US majors. Meanwhile, the US dollar is trading higher against all G10 peers. However, the US currency gave back some gains following Trump’s comments and University of Michigan data. 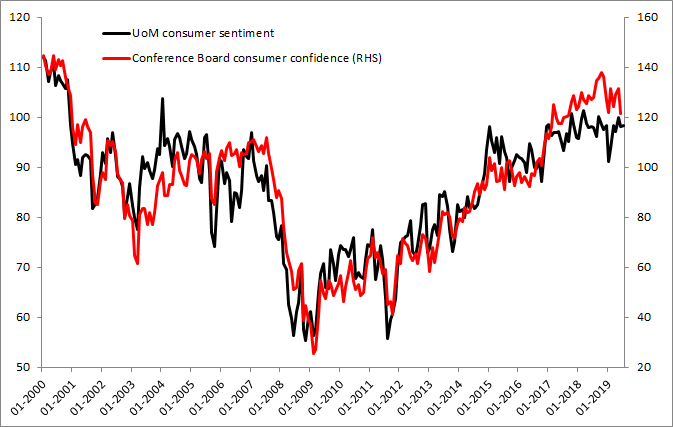 University of Michigan consumer sentiment data for July turned out to be a slight disappointment. Nevertheless, it should not have much of an impact on Fed’s rate cut plans. Source: Macrobond, XTB Research

University of Michigan published preliminary consumer sentiment data for July at 3:00 pm BST. The headline index was expected to move higher from 98.2 pts to 98.8 pts but the actual reading showed an increase to only 98.4 pts. Current conditions subindex slid from 111.9 pts to 111.1 pts (expected 112.8 pts) while expectations gauge jumped from 89.3 pts to 90.1 pts (expected 90 pts). The US dollar lost some shine after the release but the data is unlikely to discourage Fed from cutting rates therefore it is to a huge extent non-event. Earlier, US dollar pared some gains as Trump once again mocked the US central bankers via Twitter.

US500 found some support at the 33-period EMA (green line, H4 interval) on Friday. Following the latest bounce higher, the upward channel could be drawn. The upper limit of the channel can be found around 3045 pts therefore there is still some room for the index to maneuver. A lot will depend on Fed’s rate decision with any cut bigger than 25 bp having a potential to accelerate rally on the stock market. Source: xStation5

Microsoft (MSFT.US) is trading higher on Friday after releasing earnings report for the second quarter of the year (fiscal Q4 2019). The US software giant generated revenue of $33.7 billion, marking a 2.85% positive surprise. Adjusted EPS of $1.37 was 12.7% higher than analysts’ median estimate and EBITDA of $15.33 billion was 8.9% higher than expected. What is especially pleasing, is the fact that company’s cloud-computing business continue to perform superbly. The optimistic report triggered a range of analysts’ upgrades, what only helped the stock drift higher. Microsoft painted a fresh ATH at the beginning of today’s session.

A few US financial companies have reported their calendar-Q2 earnings ahead of the session open today, including American Express (AXP.US) and BlackRock (BLK.US). American Express saw higher-than-expected adjusted EPS of $2.07 but its revenue of $10.84 billion was below analysts’ median estimate. The company saw weaker than expected discount revenue growth. When it comes to Blackrock, the world's biggest asset manager, the situation was not as upbeat. The company saw weaker-than-expected revenue, net income and EPS. However, the asset manager saw massive inflows in the second quarter of the year. Total net inflows reached a record $151 billion with fixed income products seeing net inflows of $110.4 billion. Lacklustre revenue and earnings are said to be a result of increasing competition among largest asset managers.

Dow Jones (US30) members after the first 45 minutes of trade. Source: Bloomberg