US indices near 5-month highs after mixed data

The final session of what has been a good week for US stocks has begun on the front foot with the markets rallying higher from the opening bell. As has been the case in recent sessions, the US100 is leading the way and the market has just notched up its highest level since October 2018. Thursday’s trade saw a small pullback but after beginning on Monday around the 7000 mark it’s been pretty much one way traffic, and the US100 has gained almost 5% since!

The US100 is now back at the 78.6% fib retracement at 7320 of the decline from last October’s high. A break above here would open up the possibility of further gains towards the record peak of 7726. Source: xStation

A couple of second tier pieces of US data out this afternoon have sent conflicting messages for the world’s largest economy with industry seemingly underperforming but consumer confidence resilient. Industrial production for February came in at +0.1% M/M against an expected +0.4%, but an upwards revision to the previous reading (now -0.4% from 0.6% first time around) makes the data not seem so bad. While the US is still outperforming its peers on the industrial front, there are an increasing number signs that activity is slowing in the world’s largest economy. 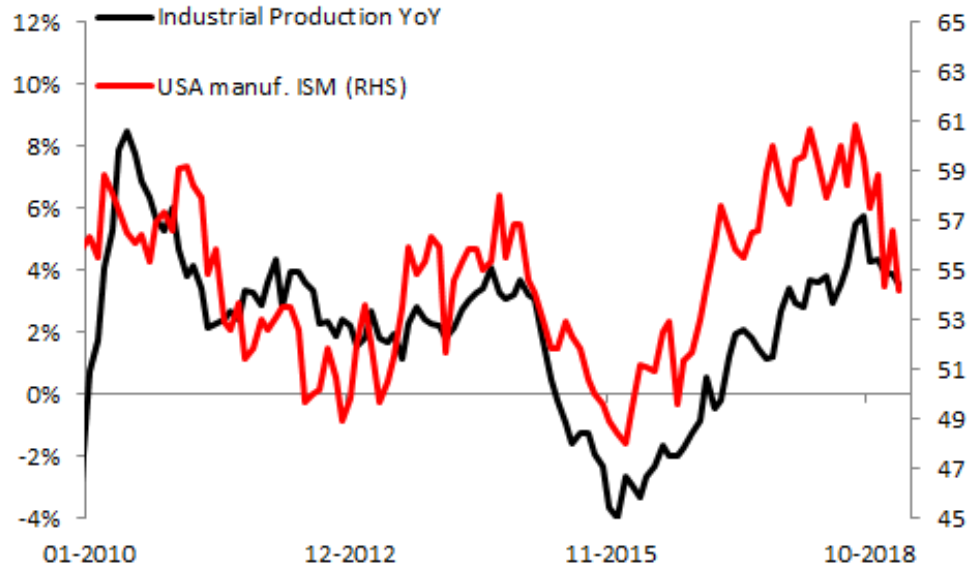 The latest industrial production figures showed a decline that is matched in the recent ISM readings. Together they indicate that manufacturing output is slowing down. Source: XTB Macrobond

Not long after the industrial data, the final economic release of note for the week showed a better than expected read from the US consumer. For March the University of Michigan consumer sentiment came in at 97.8 from a consensus forecast of 95.7. It’s worth noting however that there was a sizable revision to the prior release, which now stands at 93.8 from 95.5 originally. There were mixed messages on the inflation front with 1-year inflation dropping to 2.4% from 2.6% prior whereas the 5-10 inflation increased to 2.5% from 2.3% beforehand. 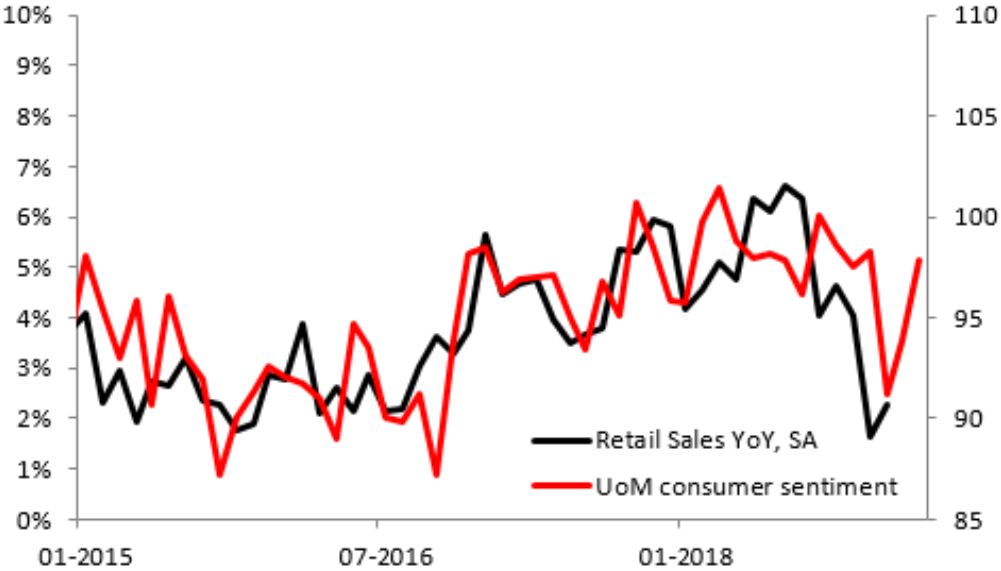 Consumer sentiment according to the University of Michigan remains pretty strong, in a pleasing sign for retail sales. Source: XTB Macrobond

Finally, in terms of individual stocks there’s been quite a drop in Tesla with the electric carmaker lower by more than 4% not long into the session. The declines come as the firm introduced its latest vehicle, ther Model Y, which is a crossover SUV and cost between $39,000-60,000. The Model Y is about 10 percent bigger than the Model 3, seats seven, features a panoramic glass roof and 66 cubic feet of cargo space, Tesla CEO Elon Musk said, showing off a Model Y prototype at the Tesla Design Center in Hawthorne, California on Thursday night.

Shares in Tesla have dropped again today and the market is moving down towards the lower bound of the range seen in recent years around 245. An RSI of 40 suggests mildly oversold conditions. Source: xStation