US stocks edge higher on reports of US-China trade talks

There’s been some small and steady gains seen in US indices ahead of the cash session as benchmarks across the pond look to recover from a fairly sizable sell-off at the end of last week. The clarification of Fed Williams comments which walked back significantly market expectations for a 50 basis point cut next week, weighed on sentiment and saw the S&P500 end Friday near its lowest level of the week and in doing so posted the largest weekly decline in almost 2 months.

A bearish engulfing candle was printed on the W1 chart last week, with price pulling back on concerns of a less dovish Fed after earlier hitting a new all-time high. Source: xStation

With Fed speakers now in the media black out period before next week’s rate decision there should be less focus on this for the coming sessions although Donald Trump has once more attacked the central bank for their policies. A series of 3 tweets from the US president posted around lunchtime read as follows: 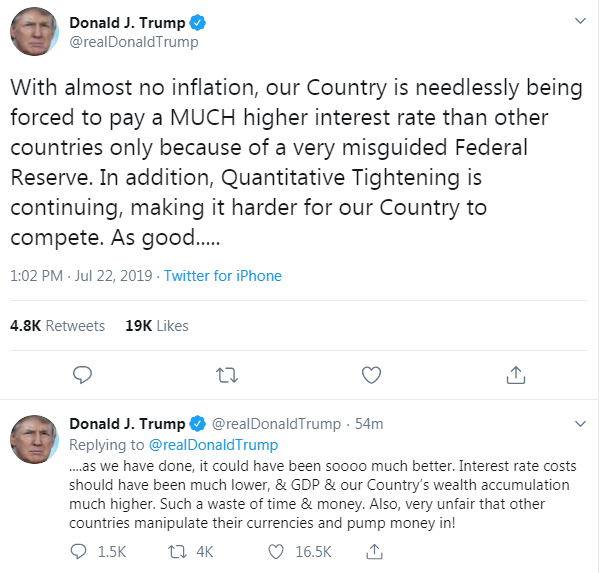 Trump has once more taken to Twitter to attack the Fed and their policies, again calling for lower rates. Source: Twitter

Just a couple of minutes after Trump added: “It is far more costly for the Federal Reserve to cut deeper if the economy actually does, in the future, turn down! Very inexpensive, in fact productive, to move now. The Fed raised & tightened far too much & too fast. In other words, they missed it (Big!). Don't miss it again!"


The S&P500 (US500 on xStation) moved up to its highest level of the day in the past hour after news hit the wires that US trade negotiators are likely to visit China next week for the first face-to-face talks since the G20 meeting in Osaka. The representatives led by Robert Lighthizer and Treasury Secretary Steve Mnuchin are expected to travel and this seems like a constructive development in the ongoing trade war between the world’s 2 largest economies.

The S&P500 has moved below the Ichimoku cloud on the H4 timeframe in what could be seen a sign that the intermediate trend has turned lower. Lows around 2974 could be seen as possible support and below that the gap higher from 2943 remains unfilled. Source: xStation