US stocks make record highs ahead of key Trump speech

It has been a fairly sanguine start to the week for stock markets in the US, with some early weakness yesterday showing that there’s still plenty willing to buy the dip. S&P500 futures came within just a few points of their record highs earlier on this morning, but then slid a little ahead of the cash open. The price action was similar to that seen on Friday when a move lower in price proved short-lived and they have subsequently gained with the S&P500 and Nasdaq 100 both printing new record highs in the past hour while the Dow Jones INdustrial Average is just a whisker off joining them in uncharted territory.

The move higher in US stocks over the past month has been impressive, not just in the size of the gains but also the lack of any deep retracements with the market remaining above its 8 EMA for the vast majority of the time. Price hit a new record peak of 3100 in recent trade. Source: xStation

Even though the economic calendar is fairly sparse in terms of big events, there is one that stands out with a speech from US president Trump at the Economic Club of New York eagerly awaited. There’s speculation doing the rounds that Trump may use this opportunity to unveil some good news on the trade front with some sources suggesting a “constructive statement on China” whilst others believe Trump may delay tariffs on German cars. As is always the case with Trump, expected the unexpected however, and it would not be too surprising if we get some market moving comments one way or the other later on. 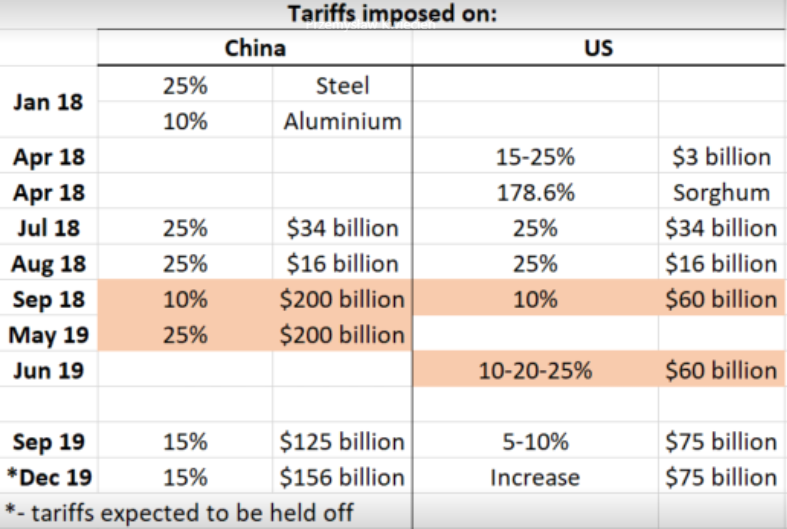 There’s been a gradual ramping up of tit-for-tat tariffs between the US and China in the past couple of years. The reciprocal measures put on in September 18 were subsequently increased in percentage terms on the same goods. However, the increases scheduled for later this year are expected to be delayed and Trump could give more information on this later. Source: XTB Macrobond

• Second day of the Eurogroup and Ecofin meeting • Canadian employment figures expected to rebound in June There is not much data scheduled...

Oil prices are moving down for a second day on concerning COVID data both from the US and Asia. The US saw number of new daily cases rise above 60k for...