In today’s calendar one can find two key releases scheduled for the US trading hours - CPI inflation for January and DOE report on oil inventories. The former was released at 1:30 pm GMT and it came in higher than expected providing a support for the US dollar. DOE report will be released at 3:30 pm GMT. 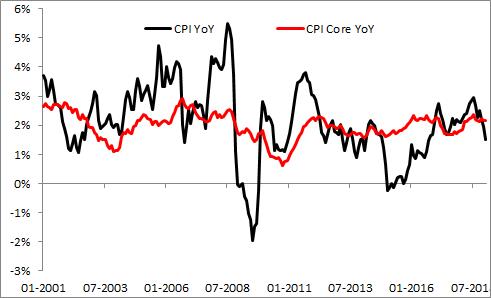 Lower energy prices in comparison with the beginning of 2018 are pushing the US headline CPI gauge lower. Meanwhile, the core gauge managed to reinforce at the previous level of 2.2% YoY. Source: Bloomberg

The US inflation report for January was expected to show headline CPI inflation slowing down from 1.9% YoY to 1.5% YoY and the core measures dropping from 2.2% YoY to 2.1% YoY. Investors were offered a beat in both cases - headline CPI came in at 1.6% YoY while the core gauge remain intact at 2.2% YoY. Throughout the past year the biggest price declines were seen among energy commodities as prices in this category dropped by an average of 10.1% YoY in January. However, this was the only major category that saw such steep drop. Most of the other subindices, i.e. food, shelter, medical care or transportation services, saw their prices increase in a range of 2-3.5%. Price of commodities excluding food and energy increased 0.3% YoY.

EURUSD added to previous decline following the release of the US inflation report. The pair broke below the lower limit of recent trading range and threatens to break below the last local low of 1.1260 in the days to come. Source: xStation5

When it comes to the market reaction, unsurprisingly we saw USD strengthening significantly. EURUSD deepened today’s downward move and in turn broke below the 1.13 handle that served as the lower limit of the recent trading range. The main currency pair may be eyeing a retest of the yesterday’s low around 1.1260 handle in the later part of the week. Situation also looks interesting when it comes to the US debt market. TNOTE price followed lower after the CPI report release and broke out of the triangle pattern it was trading in since the beginning of the year. Fulfilling the range of this pattern in a textbook manner (purple rectangles on the chart below) would bring the price to the vicinity of 119.15 handle, just a notch above the upper limit of the medium-term support zone (118.9-119.1).

TNOTE price broke below the lower limit of the triangle pattern today. In case this price scheme was to be played out in a textbook manner TNOTE could drop to as low as 119.1 handle, a notch above the mid-term support zone. Source: xStation5