After a good run of late there’s a bit of softness around US indices ahead of the cash open with all the major benchmarks called to begin lower. As is often the case the largest move can be seen in tech stocks with the US100 down by 0.6% at the time of writing. There’s been a couple of major boosts to the markets so far in 2019 with the resumption of US-China trade talks raising hopes of a deal while an apparent U-turn in the Fed’s stance now has the market pricing in the chances of a rate cut at around the same level as a hike. These developments have no doubt lifted some of the dour sentiment that weighed heavy last month, but the initial boost from them appears to have waned. That’s not to say we can’t go higher from here, but for the time being it seems that the markets are pausing and taking stock of the recent developments.


On the economic data front there’s not much to go on this afternoon with US initial jobless claims the main release. There was some more good news on this front with the weekly figure showing a drop to 216k from 233k (revised up from 231k) against consensus forecasts for 226k. This metric has been pretty strong of late and if we look in year-on-year (YoY) terms then the current levels aren’t too far from the lows seen in late 2015/early 2016. 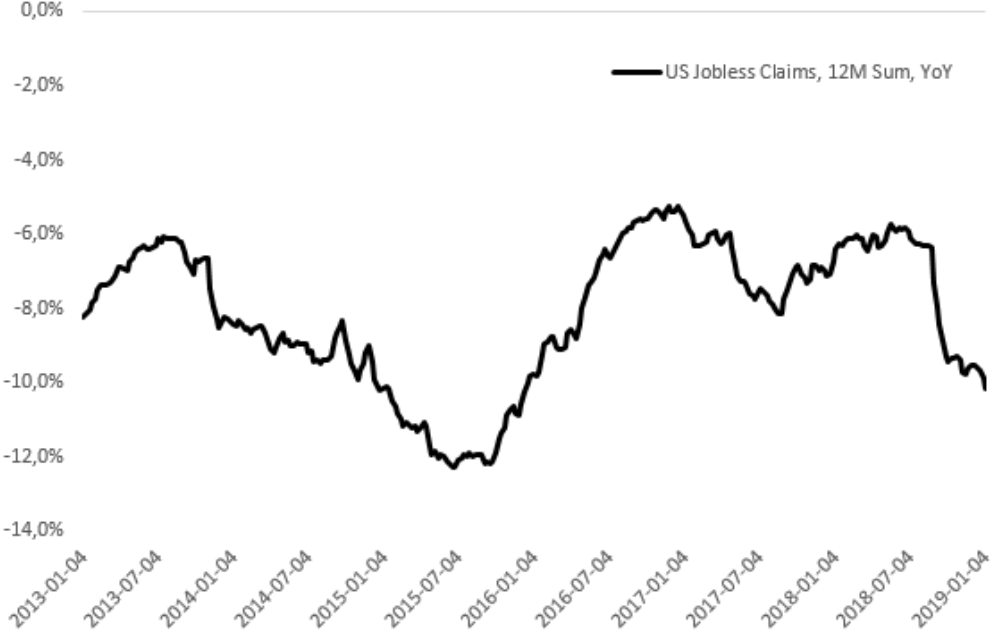 Data continues to suggest that the US labour market is strong and performing well with the year-on-year jobless claims dropping once more. Source; XTB Macrobond

The last 24 hours has seen the release of the minutes from the last FOMC and ECB decision with the former showing that perhaps the market was wrong in interpreting the Dec hike as not that dovish. This lunchtime we got some further insight into the last ECB meeting with the following comments from the minutes of particular interest:

There’s no great surprises here, but on the whole the tone does seem to be pretty cautious and erring on the dovish side. There was little by the way of market reaction with the DE30.cash remaining not far from recent highs. There could be 2 possible inverse head and shoulder setups forming in the market, with the first one in-play after a break above the neckline at 10684. This would target a measured move to 11090 if it plays out in a textbook fashion. However, this move itself could be part of a larger inverse head and shoulders, which would have a neckline around 11000 and target a far higher move to 11722 if it is triggered. Either, way the region around 11000 remains potentially key resistance and if price can’t force up through there in the near-term then a pullback to 10684 can be expected - a possible second shoulder in the second head and shoulders formation.

2 possible inverse head and shoulders formation can be seen in the DE30.cash at present. Either way 11000 remains potentially key resistance with 10684 possible support. Source: xStation

Not too much has changed for the US500 of late, with the region from 2589-2624 still possible resistance. Note that while Wednesday’s candle still ended green there is a sizable wick overhead, indicative of selling pressure from the resistance zone. Source: xStation

Majority of European indices finished today's session slightly higher,  thanks to solid performance of energy stocks, with DAX being an exception...

📉US100 retreats as Powell changed tone

Powell's initial comments sounded dovish as he reassured markets that the disinflationary process has begun, particularly in the goods sector, while...