What to expect from the Bank of England today?

The Bank of England was originally set to announce its monetary policy decision last week on Thursday, 12:00 pm BST. However, the decision was delayed by a week due to the passing of Queen Elizabeth II and a period of national mourning. The Bank of England has already warned at its previous meeting that it expects the UK economy to go into recession in the final quarter of 2022 and that such possibility will not discourage it from hiking rates to combat inflation.

What to expect from the Bank of England today?

There are no clear expectations for today's rate move from the Bank of England. Consensus among economists is for a 50 basis point rate hike. However, money markets price in a 60% chance of a large move - a 75 bp rate hike. As such there is a headline risk and a scope for wild moves on GBP market following the announcement. However, a lot of attention will be paid to details - distribution of MPC votes and future outlook.

It is expected that the decision will not be unanimous. While all BoE members agree that tightening is needed, some say it should be a 50 bp move and some see a 75 bp as appropriate. However, there are also more dovish members, like Silvana Tenreyro, who are seen inching more towards a 25 bp hike. Also guidance, if offered, will be on watch. According to current pricing, markets see BoE rates at 3.75% at the end of 2022 - or 200 bps higher than now. With only 3 meetings remaining, including today's, this means that BoE will have to deliver at least one 75 bp or bigger rate hike. 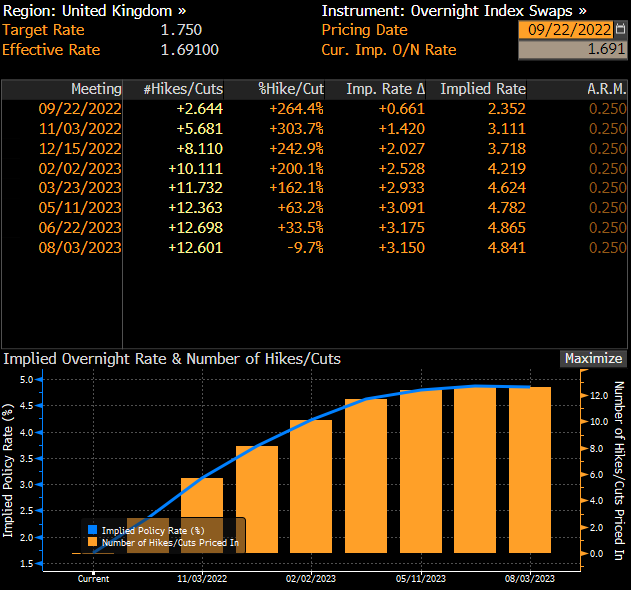 A lot has changed in case of fiscal policy since the previous BoE meeting. A change of Prime Minister led to the announcement of massive fiscal programmes, aimed at supporting households and businesses during the upcoming winter of shortages. How does the central bank see it? Will it result in lower peak inflation or will it provide more fuel for price growth? The Bank of England expects the UK economy to enter recession in Q4 2022 so attention will also be on whether this view changed. However, it looks unlikely that the new fiscal package will prevent an economic downturn but may lower its severity.

Bank of England said at its previous meeting that it plans to begin active government bond sales shortly after its meeting in September. Are those plans still in place? There is still no certainty how a new fiscal package will be funded. UK yields dropped recently amid expectations of increased fiscal spending and beginning active bond sales would exert upward pressure on those. This means that the cost of borrowing in the UK would increase, what would be a rather unwelcome development for the government that needs to finance increased spending. As such, there is a chance that BoE will delay the start of bond sales until more clarity on fiscal measures is provided.

A look at the market

GBP has been underperforming as of late with GBPUSD dropping to levels not seen since the 1980s. Situation looks a bit better on the EURGBP market but even in this case a break to fresh 19-month highs occurred recently. EURGBP has been trading in an upward channel since mid-August and has recently broken above the mid-June high at 0.8720. The pair retested this level as a support yesterday but no break below occurred, thus confirming the bullish bias in the market. A near-term resistance level to watch can be found at recent high of 0.8787.