Bitcoin and other Cryptocurrencies

What is Bitcoin - and how can you trade it? Find out with this in-depth explanation of digital currencies.

Once considered as something of a lottery ticket, Bitcoin and other cryptocurrencies have now seemingly cemented themselves as legitimate assets for trading portfolios. Indeed, this ‘digital revolution’ is comparable to the gold rushes of the 19th century, with values soaring as global interest intensifies. But what exactly are cryptocurrencies, and how could you participate in this technological boom without specialised IT knowledge? What do you have to know about those mysterious instrument? You’ll find it out in this article.

Bitcoin is a form of digital currency, created and held electronically. Unlike traditional physical currencies, like dollars or euros, bitcoins are not printed. Instead they’re produced by people running computers around the world, using software that solves mathematical problems.

Another significant difference between cryptocurrencies and physical money are banks. A central bank’s mission objective is to stabilise its currency. However, there’s no such thing as a Bitcoin Bank. This is because bitcoin is in a sense in itself a bank. An independent settlement book provides information on the ownership status of all its users and the history of transactions between them. What’s more, there’s a limited amount of Bitcoins, which also limits the role of supervising institution. Let’s take a look at how it works.

While central banks can print more money, Bitcoin has a finite amount: by 2140 there will be 21,000,000 bitcoins in circulations. So you could say that, as in the case of gold, we have limited resources of Bitcoin. Moreover, the amount of bitcoins that go into circulation as a reward for miners decreases in a predetermined manner. Every 210,000 blocks (4 years) the prize for miners falls by half. At first it was 50 BTC, then 25 BTC, and at present (10.08.2017) the price is 12.5 BTC. The pioneers of bitcoin extraction could earn the most, at the least cost. At present there are approximately 16,500,000 bitcoins in circulation.  As a result, only 4,500,000 BTC remains to be extracted, and their supply to circulation will be diminishing, which is an important deflationary factor for this cryptocurrency.

Blockchain technology - the heart of Bitcoin and other cryptocurrencies

The way the encryption of Bitcoin takes place is a revolution in the field of information technology - the "Blockchain" technology.

Let's illustrate this technology as a tower of blocks. The tower symbolises the current status of cryptocurrency accounts (who’s got how many) as seen by all bitcoin users. Each new block contains information on all new transactions that will change the current account status.

A new block, to fit into the tower, must be appropriately encrypted and matched. When this happens, it will be attached to it, and as a result, new transactions will be completed. Bitcoins in the system will be transferred among the users. 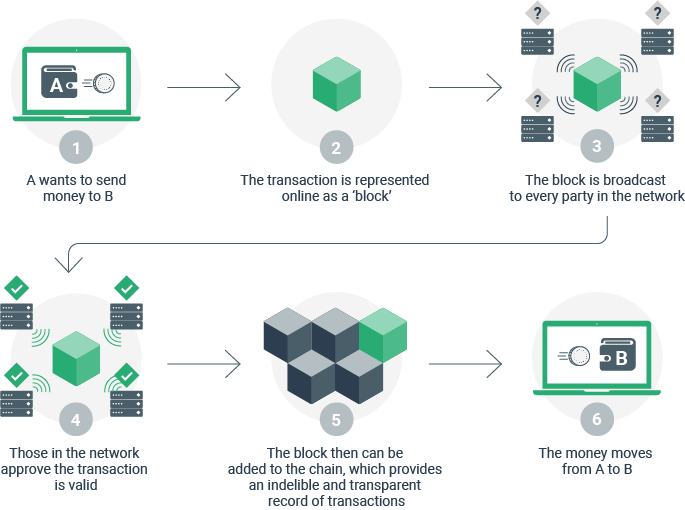 If we tried to remove or replace a block from the bottom of the tower, the entire structure would be destroyed, because each block in the tower has the same information from the previous block encoded in it. Replacing a block with other information (another cipher) would result in it not matching the previous block. What's more, they would disconnect all the blocks following it. Consequently, the information contained in this tower would be considered to be untrue. That is why blockchain technology can be considered as innovative in the field of security.

So, who is encrypting the next blocks to the tower? And how is this process going? People who are cryptographers are referred to as ‘miners’, using advanced software to dig for and ‘mine’ bitcoins. This allusion to the mining industry is meant to be a gold mine, because the bitcoin is the reward for encrypting subsequent transactions for miners. It’s in this way that new bitcoins are created and put into circulation. At this point it is worth pointing out that ‘diggers’ are expensive and complicated computers with very high conversion power. As you can see, Bitcoin is a complicated instrument and isna new chapter in the financial markets’ history.

What factors could influence the value of bitcoin?

What happens when the bitcoins run out and there is no longer a need for extraction? Why would miners spend their computing power on maintenance? Already at the present time some of the reward for miners are transactional costs, which in the future will be the total profit of the miners. But will this charge will be enough for the miners to cover the costs of diggers and adequate earnings for them?

The first issue and the most important factor - the cost of diggers, depends on the following factors:

With the growing popularity, increasing demand for computing power may have also increased the value of bitcoin. As it was said, there’s a limited amount of Bitcoins. With a stable supply, a rise in demand could end in a rise of the Bitcoin’s price.  There are also other factors worth looking at. For example, if the geopolitical tension rises or traders lose faith in the traditional currencies, Bitcoin could gain. The cryptocurrency is a new and revolutionary product, so it’s quite possible that the factors that influence its value will change over time.

There are also other cryptocurrencies that are becoming more and more popular. The success of Bitcoin has led to the development of many alternative cryptocurrencies, often called “altcoins”. Most of these altcoins offer their own take on the Bitcoin protocol, and are interesting in their own right. It helps, too, that most of these are still cheap and much easier to buy or mine. Let’s have a quick look at the most important altcoins:

While Bitcoin is still the most popular cryptocurrency, Ethereum, Ripple, Litecoin and others are still growing. Cryptocurrencies are a financial revolution with many features and many changes to come.

You can find more in our xStation 5 App
CHeck it out for free!