Related subjects:
Commodities CFDs Guides
Reading time: 5 minute(s)
Coffee is one of the most popular raw materials traded by investors. What is and why is it worth investing in coffee CFD? The answers to these and other questions can be found in this article.

It is widely known that Brazil is the largest producer of coffee, accounting for around 35% of world production. However, not everyone knows that coffee beans come from a plant grown in more than 50 countries with tropical and subtropical climates. Moreover, each of us can invest in this agricultural commodity or speculate on its price thanks to coffee CFDs. What is it about? Why is it worth trading in coffee CFD? The answers to these and other questions can be found in this article.

Futures traded on the Intercontinental Exchange (ICE) cover two types of coffee beans, namely Arabica and Robusta. It is worth knowing that Arabica accounts for around 70% of all coffee in the world and is considered a high quality product. However, it is Robusta that is sold at higher prices, mainly due to lower production volumes and high demand from multinational companies such as Nestlé. The table below shows the basic parameters of trade in these two types of coffee on ICE. 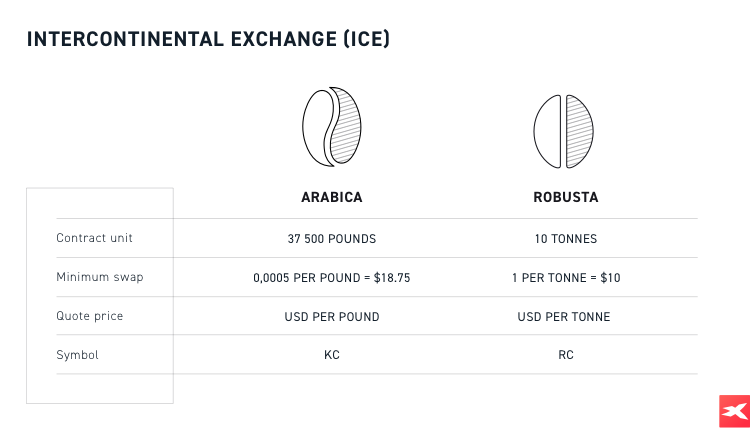 Data valid as of November 2021

At this point, it is also worth mentioning the hours during which coffee is traded on the ICE exchange, which are as follows:

What are coffee CFDs?

Investing in coffee can take various forms, about which you can read at the end of this article, but one of the simplest and most popular ones is trading in coffee CFDs. What is it about? A Contract for Difference (CFD) is a type of arrangement between an investor and a broker which lets them make a profit or incur a loss on the difference between the opening and closing price of a transaction. Coffee CFDs are very liquid as they do not tie the trader directly to the asset. By investing in them, the trader purchases only the underlying contract and, therefore, avoids the problems associated with purchasing and physically owning the commodity.

How to invest in coffee CFDs?

Investing in coffee using CFDs allows you to trade in the commodity in both directions, which means that you can make money on both ups and downs. Depending on the assessment of the potential market trends and your forecasts regarding the price of coffee, you can open either a long (upwards) or a short (downwards) position. Of course, successful speculation on the coffee market requires proper fundamental analysis, as well as analysis of the chart itself. For example, the daily chart of Arabica coffee for the last several days looks like this: Please note that information and research based on historical data or results does not guarantee future profits and anyone acting on the basis of this information does so entirely at their own risk.

When investing in coffee CFDs, you can open a long position – if you are expecting a rise in the market price of coffee, or alternatively, you can open a short position, thereby speculating on a fall in coffee prices. At this point, it is also worth mentioning that coffee CFDs are attractive for retail investors because they allow the use of leverage, which can multiply profits but also lead to large losses.

When discussing the investing in coffee in the form of futures contracts, attention should also be drawn to the phenomenon of contago that exists in most raw material and commodity markets. It entails a mechanism of futures rollover, which consists in maintaining a position by switching from an expiring series to a contract with a later settlement date, e.g. from May to July. This can be done by selling an expiring contract before its settlement and buying a new one.

Knowing what futures rollover is, we can move on to explaining the phenomenon of contago, also known as forwardation. This is a situation on the futures contract market (e.g. coffee futures) where the price of a contract to be settled in the future is higher than the current market value of CFDs. An example of this phenomenon can be a situation where the current price of an expiring Arabica coffee contract is USD 105 per unit and the price of another contract with a later expiry date is USD 110. In this case, contago amounts to USD 5 and directly translates into a position rollover cost of USD 1875 per single contract. How was this sum calculated? An Arabica coffee futures contract covers 37,500 pounds of Arabica, and its price rate reflects the value of 100 pounds of coffee, so the rollover cost is the product of 5 and 375.

At this point it should be noted that a relatively low level of contago is a desirable and common phenomenon in the goods and services market. If, on the other hand, the level is too high, it encourages the storage of commodities (in this case coffee) and their resale in the future at prices higher than the current ones. A phenomenon opposite to contago is called backwardation, but it occurs much less frequently in the coffee CFD market.

What are the possible forms of investing in coffee?

As mentioned earlier, coffee CFDs are not the only way to invest in this commodity. How else can you invest? There are several options; the most common one include: 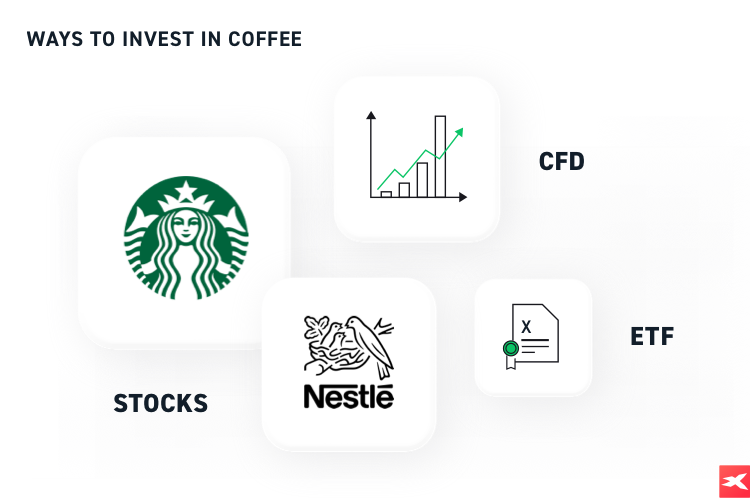 - Coffee ETFs - these funds allow you to invest in the coffee market over a medium to long term;

- investing in shares of coffee companies such as Nestle, Starbucks and many others; however, it should be borne in mind that most of such companies also earn money by selling other products or services, which also translates into the price of their shares.

Coffee is the second (after oil) most traded product on earth. Although at first glance it might seem that coffee is bought mainly for consumption purposes, it turns out that it can also be an investment. Moreover, you can also speculate on its prices through coffee CFDs, which can provide an excellent opportunity to make money on both ups and downs.

8 minutes
FX Trading - How to Invest in Forex CFDs

7 minutes
Commodity Trading - How to Invest in Commodities

14 minutes
Emissions Trading - How to Invest in Carbon CO2?

You can find more in our xStation 5 App
CHeck it out for free!