The New Zealand government plans to increase public spending by 12 billion NZD over the coming years, a move aimed at underpinning economic growth amid a global slowdown. Roughly two-thirds of that sum is designed to be spent on transport, school and hospital projects while the rest will be added to future allowances. The report also said that more details will be revealed early next year. As a result, the NZ government sees a 943 million NZD deficit in the current fiscal year ending on June 30, compared to a surplus of 1.3 billion NZD projected in May. On top of that, budget surpluses will be cumulatively lower by 9.1 billion NZD through 2023. Either way, net debt is expected to stay comfortably within a 15-25% GDP target.

A knee-jerk reaction in the NZ dollar was mixed as it gained initially and pared back those gains thereafter. In theory, looser fiscal policy could strengthen the case for higher rates, albeit economic growth is still projected to slow down noticeably despite the stimulus package. The Treasury forecasts GDP to slow down to 2.3% in this fiscal year, a hefty cut compared to 3.2% seen in May. Thus, it seems that more public spending could prevent a deeper downturn but it is unlikely to convince the RBNZ to be more hawkish. Anyway, market participants are currently pricing in roughly a 10 bps rate cut through 2020, suggesting the RBNZ is expected to stay on hold next year. 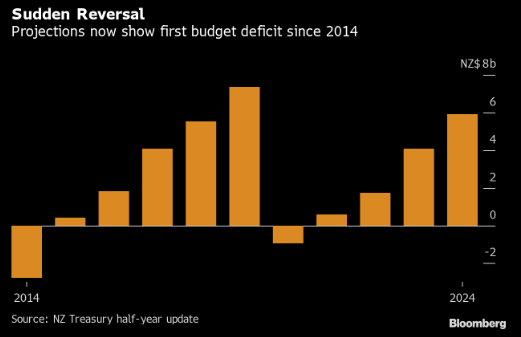 New Zealand will see its first budget deficit since 2014 as the govt plans to boost public spending. Source: Bloomberg

Daily summary: Indices end the day on a solid upside, oil near the March peaks

U.S. airline stocks are seeing gains today due to optimistic forecasts from Southwest (LUV.US) and JetBlue (JBLU.US) for second-quarter earnings in 2022....