The New Zealand dollar is by far the worst performing major currency this morning after business sentiment deteriorated to the lowest since the GFC extending its losing streak. The ANZ gauge dropped in August to -50.3 from -44.9% reaching its weakest point since 2008 and exerting substantial downward pressure on the kiwi dollar. Note that RBNZ Governor Adrian Orr said in Jackson Hole last week that weak business sentiment was starting to influence investment decisions and leading to lower output. On top of that, Prime Minister Jacinda Ardern has lately come under pressured from the grim mood of the business sector as it threatens the NZ economy. In addition, building permits in July declined 10.3% MoM deepening its 7.6% fall registered in the prior month which was downwardly revised to -8.2%. All of these has resulted in a 0.9% decrease in the NZ dollar as of 6:42 am BST. 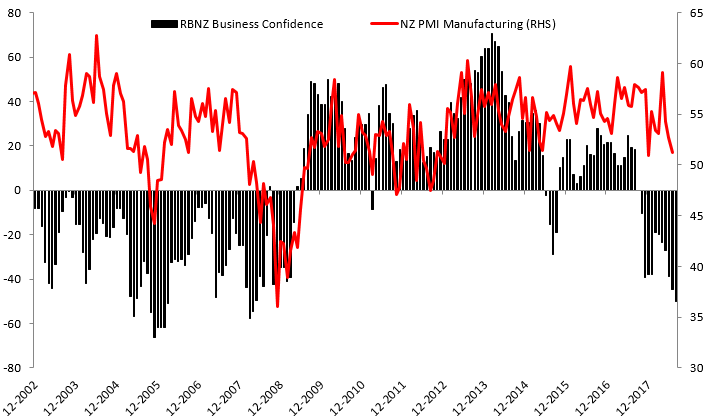 While the NZ dollar is suffering from weak sentiment in business, the Aussie dollar is retreating partly on the back of the NZD’s weakness but also due to the latest CAPEX data. During three months through June private capital expenditure dropped 2.5% in quarterly terms falling short of the median estimate suggesting a 0.6% pick-up. The details showed that capital outlays in construction shrank 3.9% while plant and machinery CAPEX declined 0.9%. On the flip side, the data for the first quarter was noticeably revised up. The headline CAPEX was lifted to 1.2% from 0.4%, CAPEX in construction was bumped up to -0.9% from -1.3% whereas spending on plant and equipment was revised to 3.6% from 2.5%. Overall, the second data suggests that CAPEX could have been a small drag on economic growth - the Q2 GDP data will be released as soon as next week with forecasts ranging from 0.6% to 1% growth. Although the numbers for the past quarter were rather weakish, the future outlays are expected to accelerate. The latest estimate for 2018/2019 CAPEX came in at 102 billion AUD beating analysts’ expectations of approximately 100 billion AUD marking a 16% increase compared with the previous estimate. It is worth adding that building approvals in July dropped 5.2%, however, it followed an upwardly revised 6.8% pick-up in June. Either way, the Aussie dollar is trading 0.45% lower as of 6:56 am BST.

The AUDNZD has reversed from the 50% retracement in the aftermath of the data from both economies. Technically the pair could run into a resistance in the vicinity of 1.0980 followed by 1.1120. Source: xStation5

Let us also mention a tariff thread after Donald Trump said that three countries - South Korea, Brazil and Argentina - would be exempt from duties that had been imposed on inbound steel and aluminium earlier this year. It is worth noting that prior to this year these three countries accounted for nearly a quarter of the US steel imports. Therefore, the move undertaken by the US administration is a positive sign for US-based automakers as they have recently complained about a preliminary NAFTA agreement struck with Mexico risking substantial price increases in the United States and thereby undermining demand for cars there.