Exploring the UK and US Trading Scenes: How Do They Differ?

6 minute(s)
The UK and US are incredibly influential in global trade, but how do they differ? Here is our breakdown of the differences between the UK and US trading scenes.

We all know that trading takes place every day around the world, but it’s hard not to argue that the UK and US are the real heart of global trading.

Home to Wall Street, the London financial district, and many of the most popular cryptocurrencies, the UK and US financial markets are unquestionably a vital part of the world’s trading and investment network.

This got us thinking; while the UK and US might both be of equal importance for investors everywhere, how does the average approach to trading differ between the UK and US?

To help break down these differences, and enlighten you on how you might want to approach trading in your preferred country, we surveyed 500 UK and 500 US trade and crypto investors of different genders, age, and income groups, to get a feel for their particular trading scene.

The insights into both are fascinating, surprising, and might be just the inspiration you need to help kick off your own trading and investment career.

Heading to the UK first, the results of our investor survey reveal that the mean age that UK traders started their journey is 31, though 24% of those we spoke with say they began trading between the ages of 26-30.

As for how our 500 UK traders got into the trading scene, 54% say they were encouraged to do so by knowledgeable friends or family, with a further 43.6% saying it was down to social media and online content.

But when it comes to why our UK traders first got into investing, an overwhelming 72.4% say that it was the opportunity to make money that inspired them. But there will always be risk-takers in the financial scene, as shown by the 17.6% we asked who started just for the challenge it presented.

The US Trading Scene

So, how do US traders compare with their overseas cousins?

Interestingly, a large portion of our US survey results are incredibly similar to those of UK investors. The mean age of US traders is 30, just one year younger than investors in the UK, yet only 21.8% of those we surveyed say they fall in the 26-30 year age bracket.

As for how they got into trading, a similar number of the US traders surveyed said it was because of friends and family: 53.8% to be exact. That being said, fewer US traders appear to get into trading online, with only 38.8% of those we asked saying this was how they got started.

Our results continue to show a similar trend as to why our US traders started as well. 71.4% said it was a way to make money; only one percent less than our UK traders.

It would also appear, however, that there are ever so slightly more risk-takers in the US. 17.8% took it on for the challenge, 0.2% more than in the UK. 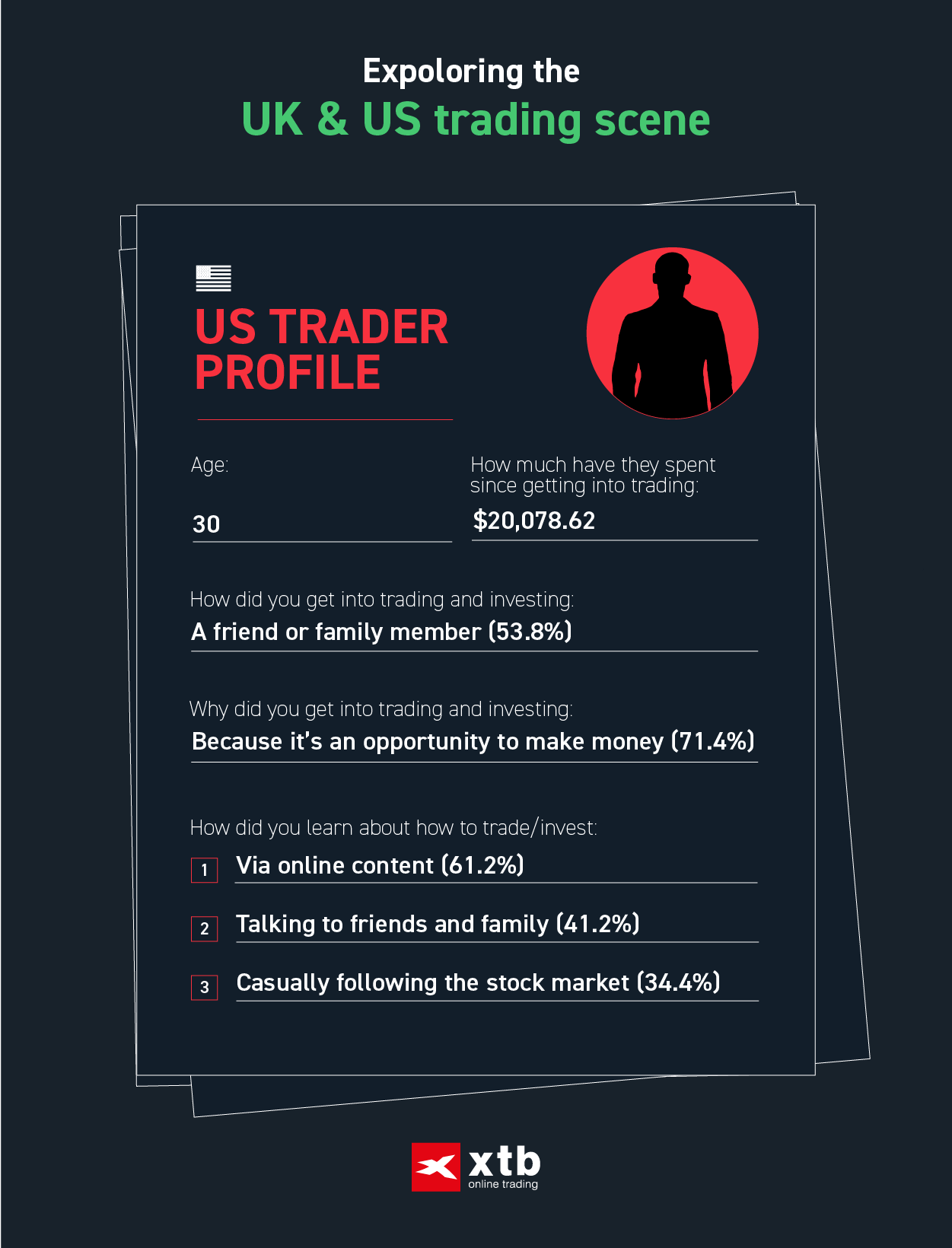 How does learning about trading differ between the UK and US?

It’s clear that UK and US investors enjoy similar approaches when it comes to getting into trading, but how do individuals in the two countries go about learning their craft to begin with?

Other popular methods of learning include being taught by friends and family, with 46.2% of UK investors and 41.2% of US investors taking advantage of others’ knowledge.

Interestingly, a large number of UK traders (32.2%) prefer to learn by looking at successful investors, whereas 34.4% of US traders prefer to casually follow the stock market instead.

What is the average investment made by UK and US traders?

Learning to effectively invest and trade isn’t cheap, so another question we asked our survey responders was how much they’d invested in trading since they’d started.

The frugality of US traders is further backed up by 17.2% of US investors we spoke to saying they’d likely invested less than $500 total.

Age, gender and income differences in the UK and US scenes

So, while we’ve looked at how the UK and US trading scenes differ at a general level, are there any specific differences we can pick out when it comes to age, gender, or income?

In the UK, it would seem that women get into trading slightly younger than men. The mean age of UK female traders we surveyed sits at 30, compared to 32 for men.

In the US, however, it looks to be the opposite. The mean age of US men is 30 whereas the mean for US women was 31.

And when looking at investment totals over $100,000, the ratio between men and women is actually much closer in the US than UK. While only 5.2% of US women we spoke to had invested this much, it’s closer to the 10.7% of US men than the British equivalent data.

Unsurprisingly, there is a clear difference between the percentage of millennial investors, compared to baby boomers in both countries.

In the UK, the mean age at which 25-34 years olds took their first step into the trading world was 27, a marked difference when compared to those in the 55-64 age category whose mean age was 41.

And when it comes to learning about trading, 29.8% of UK millennials are willing to look to successful investors to learn compared to just 13.6% of baby boomers.

In the US, however, the mean age difference appears to be much closer, with the mean age of 25-34-year-olds getting into trading sitting at 27. This is compared to a mean age of 38 for those in the 55-64, an indication that traders in the US are more inclined to get into trading at a younger age.

As we touched on previously, a small percentage of traders get involved due to the challenge and risk that trading presents. According to our survey results, while risk-takers fall into all the income brackets, the highest percentage in the UK (27.8%) sit in the £90,000-£99,999 income bracket. This is not the same for the US, which saw 15% sitting in the $90,000 - $99,999 range instead.

While correlation doesn’t equal causation, it certainly hints at the idea that the more income a trader has, the higher the chance of them taking increased financial risks.

And there you have it; the most striking differences between the UK and US trading scenes. While on a surface level, the traders in both countries seem to take similar approaches, when you dive into the details, there are subtle differences.

But, no matter whether you’re based in the US or UK, if you’re interested in making a start in the trading world, XTB is an excellent place to start.

You can keep up to date with what’s happening and the latest marketing analysis and news, or our trading academy is the place to start if you want to begin your trading journey.

3 minutes
Everything You Need to Know About Rollovers!

5 minutes
How to Cope With Pressure | Mindset Course

5 minutes
How to Prepare for Success | Mindset Course