The world’s second largest economy expanded 6% in annual terms during the three months through September, a number slightly disappointing market observers calling for a 6.1% increase. Anyway, it was another growth deceleration on the trot, from 6.2% this time around, and as a result it was the slowest pace in almost three decades. Either way, it looks like the Chinese government is on track to fulfill its pledge for this year to get economic growth between 6% and 6.5%. Looking into the details one may notice that the major drag on growth in the past quarter was weakish investment as its contribution to GDP slumped 19.8% from 25.9%. Concurrently, rather tepid domestic demand retrained imports and thereby increased a net exports contribution to GDP growth to 19.6% in the nine months through September. In turn, a consumption contribution to growth picked up to 60.5% from 55.3%, boosted by notable tax cuts delivered earlier this year.

In the light of a quarterly GDP release, a set of monthly indicators drew a little less attention. Anyway, they produced quite decent numbers with industrial output surprising the most coming in at 5.8% YoY, well above the consensus of 4.9% YoY. Retail sales grew 7.8% YoY and matched expectations, while investments in fixed assets (except those in a rural sector) increased 5.4% YTD YoY, only a touch below the Bloomberg median estimate at 5.4%. Overall, a reaction of financial markets to these releases has been rather subdued or even somewhat negative looking at how Chinese indices have performed as of yet. Looking forward, a trade battle between the US and China should be on top of investors’ attention. 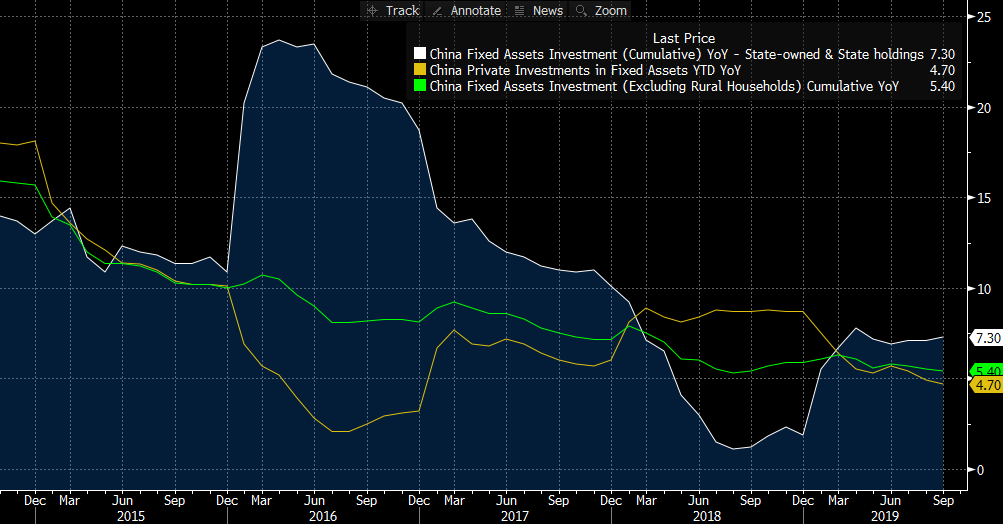